One to Watch: Boker Mini Kwaiken People love sequels, but companies love them more. From a profit perspective, sequels are 100% no-brainers–haul out the old thing, move some stuff around, and release it. It’s why there are approximately 203 special editions of sports cars. Corvettes, Ferraris, and Bugattis all come in bazillions of different iterations because companies can sell the same thing to the same people twice, especially if there is a Z or an X or the word “Limited” in the name.

What we have with the Boker Mini Kwaiken is a sequel. The original Kwaiken has been a huge success for Boker. They have released no fewer than four different versions: the original, the BladeHQ version, the titanium flipper version, and the upscale VG10/Carbon Fiber edition. At IWA, the European version of SHOT Show, Boker announced a new knife in the Kwaiken line: the Mini.

The original production Kwaiken was a very interesting knife, taking its lines from the sublime Lucas Burnley custom. But it had few issues, such as a handle that did not fully surround the tip of the knife and a thumb disk that was all but inaccessible. Iterations happened and those things got better, but it wasn’t until the modders got a hold of the Kwaiken that it became the huge hit that it is. I covered that here, but the short version is this: no knife has been the subject of more interesting or popular mods than the Kwaiken (though Smock Knives Mini Southard is a better mod. Really anything Kevin does is exceptional).

Above is a picture of my Boker original, and here is my Smock version, complete with the Dietz mod converting the knife into a flipper: 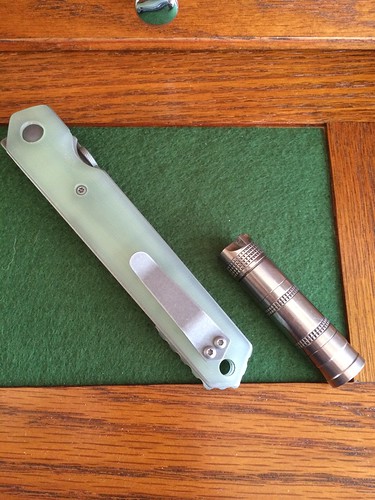 The Kwaiken is just extraordinary as a platform for modification.

So with the release of the Mini Kwaiken, Boker gets to go back to the same well again. But the Mini is not simply a money grab. This smaller version will come in with a blade length under 3 inches for broader legality (check your local knife laws to make sure), and it runs the nicer VG10 steel (the original had AUS8).

The weight of Mini has not been released. This version is the flipper version only, and it comes with two handle materials: black G10 and Titanium. Modders, get ready. There are more Kwaikens coming your way.

The interesting thing is that some clever modders have already made Mini Kwaikens. There are at least two different folks making cut down versions of the Kwaiken. The question then is one of chicken and egg–did Boker know of the modders or did Burnley have this in his head all along?

The one Kwaiken Boker hasn’t made yet, and the one they should make, is the Kwaiken with the Dietz mod. It’s a brilliant design and, frankly, a better flipper than the production flipper. Given the rate at which Boker is cranking out these variants of the Kwaiken design, it’s probably only a matter of time until we get that version. Until we do, the Mini Kwaiken is probably my favorite of all the designs out there–smaller, with a still impressive profile both in the pocket and the hand. Let’s hope they fix the tip-poking-out-of-the-handle problem.