Spyderco’s releases over the past few years, basically since they finished the “Tenacious line” of value folders, has focused on the high end of the production folder market. The number of new knives under $100 has diminished each year. And some of those knives, like the Spyderco Cat, have been underwhelming both in terms of their materials and in terms of their innovation. 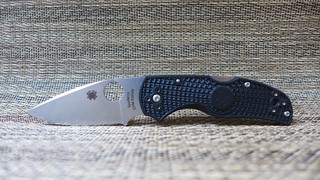 I think one of the reasons that this stagnation has occurred is that the market has gone crazy, allowing production companies to sell knives at much higher prices than ever before, and so basically everyone from Spyderco to KAI is getting while the getting is good–a classic and time honored way to boost profits.

But another reason I think this has been the case is that the core of Spyderco’s line, the evergreen blades like the Delica, Endura, Dragonfly, and Paramilitary II are just so strong that there is little incentive to make something in that price range. Realistically improving on the Dragonfly or Paramilitary design is going to take an awful lot of time and energy, and it’s not like those knives haven’t been selling.

So in many ways the Native 5 in FRN is a really unusual knife–it’s a revamp of an evergreen blade, but this particular configuration seems like something that should have come long a long time ago, maybe when the Delica and Endura lines got full flat ground blades. In short, the Native 5 in FRN is an incremental upgrade but one that crosses a tipping point from good to great. It might be just a tad bit of difference, but like the difference between 33 and 32 degrees, that small bit of difference has huge impacts on the outcome. 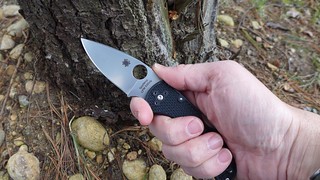 Originally conceived as a model to sell in Wal-Mart, the Native’s gimmick has been that every single piece of the knife is made in the America–from the blade steel to final assembly, this is a USA Made blade. The blade is about 3 inches long but has finger choil that chews up some of the cutting edge. The entire knife is very thin, and thanks to a lack of liners, very light. The lock is a very finely made lockback that is exceedingly tight–tight enough to eliminate blade play and tight enough to make quick flicks impossible. The blade steel is the very excellent S35VN. The knife has the traditional spoon shaped pocket clip standard on many Spydercos. 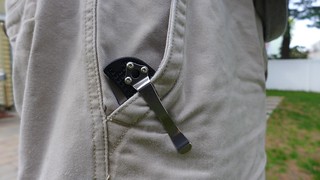 Finally, the blade is quite light, coming in at 2.9 ounces.

I carried this knife on a couple of hikes, around the house for two weeks, and did some excavation/yard work while carrying the knife. The host of tasks I used the Native 5 for is pretty representative of what home owners do–I opened bags of potting soil, broke down boxes, did food prep (the Native 5 passed with flying colors), and opened packages of all sorts. I also used it to make some tinder for fires outdoors. It worked well in pine and oak, though the tip was always a concern–it is quite thin.

The Native knives always represented a point of difference, a divergence from the routine Spydercos. It lacks the distinctive Spyderco hump, and with the finger choil it feels more like a Strider in hand than it does a Spyderco.

The Native 5 is simply a refinement of the Spyderco formula, and all of those refinements make it an excellent blade. The addition of the ultra-light handles is also a nice touch. In many ways, the Native 5 in FRN is an improvement over other Natives. Its clean and simple grind makes it a step up from the Native 3, and the lighter handles make it a better EDC than the previous Native 5. (Though that is probably a preference. That was a damn fine blade, too.)

In the end, all of these things add up. The Native 5 in FRN is a more advanced blade than the Delicas and Enduras out there, and it is a more carry friendly blade than its Native brothers. It is something like a fantasy team, combining all of the best elements of various sourced together in a package that is just handy to have–no hump, finger choil, and a concealed rear tang when the blade is closed. 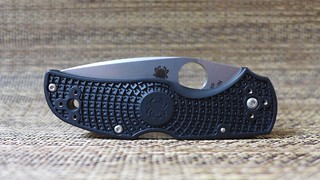 In terms of the mid priced, mid sized Spydercos, this is definitely my favorite.

In addition to scoring big with features and specs, the Native 5 in FRN is a step up from other Spydercos in the same price. FRN is a contentious material. For a lot of people it’s too plasticky, and I agree. In particular, the Delica and Dragonfly handles feel like they are made of the same material as children’s blocks, but with the Native 5 in FRN that tacky rough feel is gone. This is a clean smooth handle material.

Additionally, the blade’s full flat grind is something of a masterpiece. In the kitchen this thing cut like something removed from the knife block or purchased at Williams Sonoma. Its grind and steel are so nice that it made it hard to reach for actual kitchen knives with cutting apples, slicing up cooked chicken, or prepping meat for the grill. This knife’s slicing performance is one of the reasons why full flat grinds are so popular–they are really fun to use. Finally, it’s worth it to point out just how great the lockback is here. 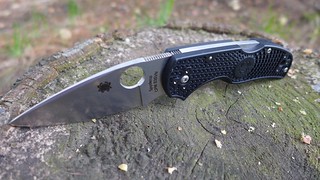 Normally lockbacks tend to be full of gaps, either on the sides of the lockbar or where the lock and blade interface, but here there isn’t so much as a hairline space. And the lockup itself is incredibly solid. Maybe it’s just more attention was given to the lockback here, but I can’t help feeling like there is something new and different in the machining and creation of this lock. Only Spyderco knows for sure, but this is one heck of a good lock. 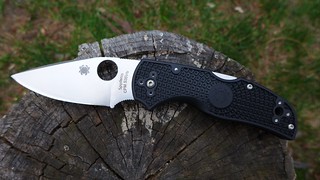 For the money you won’t find something with the same level of steel, such a small carry package, and such refinement anywhere (well, the Dragonfly II…). This knife proves that there is still room to iterate and improve on Spyderco’s evergreen models, and us knife knuts are the beneficiaries of this incremental improvement.