One to Watch: Victorinox Pioneer X

At trade shows and in a very few number of stores worldwide (like four or five) Victorinox has a “build your own Swiss Army Knife” setup. You pick the size you want and the tools you want and they put it all together for you. Why this is not a standard “service” offered at a bunch of places is beyond me (though giving you 95% of what you want always leaves open the possibility of selling you a knife with 97% and 98% and so on). But most people can’t get to one of these SAK buffets. So the option most of us have to get the “perfect SAK” (which is different for virtually everyone) is to do one of two things: have one made or make one.

Swiss Army Knives aren’t iPhones–regular people comfortable with tools can take them apart and put them back together. But it’s not easy and it is not cheap. Inevitably a part will break or you will need to Frankenstein one knife to make another, and you end up with lots of parts. It’s an expensive thing to do, and it takes time. There is a knack to disassembling and assembling these tools.

Instead of doing that and because I wanted to see how the best in the world do it, I ordered a custom SAK from Robert Lessard, aka SAK Modder. Widely regarded as one of the finest SAK customizers, his options are virtually limitless. From combining tools to making new tools from scratch, he can do it all. And he adds a few things that are subtle but real upgrades–like superior anodizing and beefier backsprings.

I had Robert make me a Pioneer with scissors. Here it is: 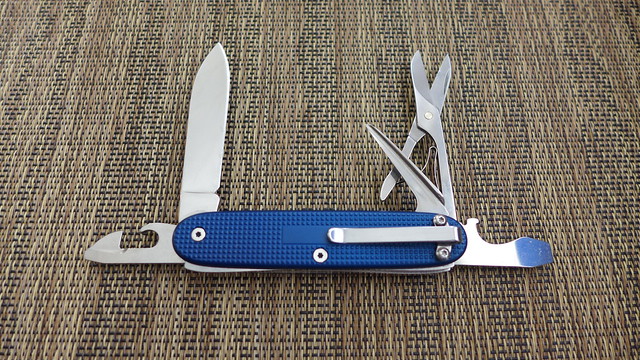 I have carried and used this knife for more than a year now, and it has slowly worked its way into the “unsellable” tier of tools. Short of a hospitalization, there is nothing that would prompt me to sell my Pioneer. It was with me when my second son was born and stayed at my hip when we had to go back to the hospital a few days later on an emergency basis. It does basically everything you could need in an urban setting, and it doesn’t scare anyone.

So when Victorinox announced the Pioneer X, one of their first new models in ages, I was very surprised. It is my Pioneer exactly–a regular Pioneer with scissors.

The overall package is very enticing. The Pioneer normally comes with a main blade, the can opener/small driver tool, the bottle opener/large driver tool, and the surprisingly useful awl (which I have found does wonders as a clam shell cutter). It is also an alox model, dropping the red cellidor handles for the checked aluminum. The new Pioneer X has all of those features and the scissors.

My Pioneer has a lot of sentimental value and an excellent over-the-top pocket clip, but if I were doing it again, I’d probably opt for the production model (though having my PERFECT set up is worth a lot to me–that pocket clip makes a huge difference). My custom came in at about $200. The new Pioneer X will undoubtedly sell for much less than that, and we know it will be awesome, quality-wise. Victorinox’s fit and finish is top-shelf even if their prices aren’t.

Who knows, this might end the upgrading process and give you that knife that is 100% of what you want. If not you can always travel to Switzerland and visit a store with a SAK buffet.