At $400 you can get almost anything a non-enthusiast would buy. Of the mainstream brands, all but the most specialized stuff can be bought–Spyderco, Surefire, Benchmade–for $200 a piece. As the market has grown over the past 3 years, these companies have introduced stuff beyond this price point, but that stuff is rare. The Spyderco Nirvana, a collaboration with Peter Rassenti, for example, has an MSRP over $500, which puts it out of range here, but the Enduras and Delicas of the world are well within reach, even the sprint runs with exotic steels.

In the flashlight arena, only soda can and search and rescue lights out of range. If you want something that drops in your pocket, you can have it for $200. One exception to this is the “bling” lights from JetBeam, Sunwayman, et. al. These lights are usually suped up versions of their flagship EDC light. Not merely material upgrades, like the Ti version of the Olight S1 Baton, these are lights like the Sunwayman C25C Thrones. They have upgraded features, crazy machining, and lots of decorative elements. My experience with these lights has not been good.

Unlike the materials upgraded S1, these lights alter functionality and/or add elements that I generally find ugly and less useful. Companies have been making them for years now, so they must sell enough to justify their production, but don’t mistake these for true high end lights, like a McGizmo. They may look like those lights, but these bling lights are only superficially similar. The other issue is that they prohibitively expensive. The Thrones is “only” $150-$200, but some of these bling lights are more than $400. Yikes!

With the warning out of the way, on to the show:

A word about stuff not selected. There are quite a few ZTs in this price range, and they are by in large good knives with one major flaw. The ZT0350 and the ZT0909 are both big blades that flip well.

I think they are too big for general carry, but if you need something more stout than those three knives, I’d look at either of those two blades. The problem I have with the rest of the line up, the non-linerlock portion of ZTs line up, is the detent. The detent system on ZT’s framelocks makes them more difficult to deploy than they need to be. If your fingers are resting on the framelock at all, even with a feather touch, the knives are a challenge to deploy. On some of the bigger models, this isn’t a problem. On smaller ones, like the ones in this price range such as ZT0450, the problem is very noticeable. Until they fix that, I can’t recommend a ZT as an EDC knife when Kizer and many others nail the flipper deployment.

This is a total dog fight. There are three blades, in my mind, that stand out above the rest: the Paramilitary 2, the Benchmade Griptillians in G10, and the Kizer Gemini. 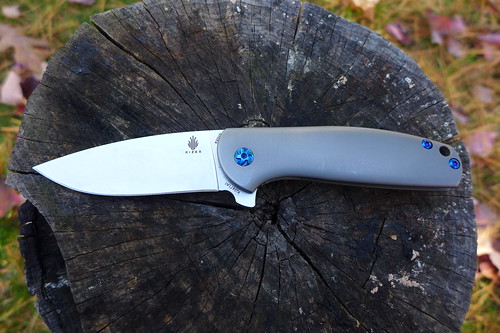 This is by far the closest competition in the entire Recommended Series this year. Both Spyderco and Benchmade upped the ante by giving their best loved and best selling designs steel upgrades. Spyderco opted for the high end, ultra hard S110V, while Benchmade went with the all around awesome steel–20CV. Kizer’s approach is a bit different. Instead of going exotic with their steel, they chose a well-known, well performing steel S35VN and built a knife around it with tolerances like a custom. In fact, having owned both a custom Jasmine and the Gemini (the collaboration version of the Jasmine), I can tell you I prefer the production model. In the production world only Shirogorovs flip better than the Gemini, and those knives are five times more expensive. It is so hard to decide here–total dogfight.

In the end, I opted for the Paramilitary 2, even though I personally would take the Benchmade Mini Grip in G10. I prefer smaller knives, but I know that lots of knife people don’t. I work in an office and something as big as the Paramilitary 2 would cause a stir. The Paramilitiary 2 design, coupled with the new steel, is winning design. Spyderco touts its small knives as “little big knives” that is, small knives that perform like big ones. The Paramilitary 2, through some bit of magic, is a “big little knife.” The thin ground blade makes it the best cutter of the group and the lock, the compression lock, is one of my favorites in the knife world. As tough as the knife is to choose in this price bracket, the light is dead simple. For around $200 you can get a damn fine, have-it-for-life light called the HDS Rotary. It has an amazing and simple UI, a great, truly overbuilt design, and an accessory clip that works as if it is magic. The Rotary blows away basically any Surefire designed for EDC. With a top end lumens count of 325 on new models , a low that is something around 1 lumen, and virtually everything in between, the Rotary is a do it all light. It’s probably bigger than you’d like for a 1xCR123a light, but all that size gives the Rotary a build quality that literally nothing on the market can match. Elzetta’s are probably as well built but they are twice the size.

If you have $200 don’t bother with the Olights, 47s, and JetBeams of the world. Go to HDS and don’t look back. You will never be disappointed in the Rotary, regardless of what you plan on doing with it. It’s that good. One word of caution: availability tends to be spotty, so if you see one and you have the means, you should probably grab it. At one point the wait list was over a year long from Henry himself, but the backlog has worked out and they appear at retailers every once in a while. Also, get the Executive model. It can tailstand.