It’s a classic ploy used by car makers to get folks back to the table to buy something they already own–the special edition. Corvettes sell like hot cakes, but just about the time that the current model’s sales start to lag, out comes the Z06 edition, complete with fancy brakes and a brand new engine.

Zero Tolerance ain’t no group of dummies. They, too, use the special edition to really hook their customers. They go so far as to have both limited edition ZTs, like the uber ZTs–the ZT0454, the ZT0777, the ZT0888, etc–and special editions, which are upgrades to already great knives.

In the case of the subject of this review, the ZT0450, there are actually two special editions: a carbon fiber version with a black S35VN blade and this model the ZT0450CFZDP. That name is a mouthful, but it’s actually pretty telling. This is a ZT0450 with a carbon fiber show side (hence the CF) and a ZDP-189 blade (hence the ZDP). It is the Z06 version of the ZT0450.

I reviewed the ZT0450 when it came out and it was a good knife–slim (tiny compared to some of the brutish ZTs), with good steel. But it was a bit cookie cutter. ZT has released a slew of titanium framelock flippers in the past two years, all with S35VN steel.

But more than the lack of interest, the thing that got me was the weird hitch in the flipping action. It was the same hitch that I found on the ZT0456. The Modern Neanderthal podcast shed some light on this issue–it has to do with the way ZT cuts their detents and lock bars. If you put pressure on the lockbar the knife just doesn’t flip open. Alas, for me a flipper that didn’t flip was an issue. The ZT0450 was very good, but not great.

The ZT0450CFZDP limited edition is a collaboration between highly regarded custom maker Dmitri Sinkevich and Zero Tolerance.  It is a scaled down version of the ZT452, which is, itself a tamed down version of the uber ZT, the ZT454.  Its probably worth it to note the amount of iteration done here.

One major benefit of all this iteration is with each new model, they get to tweak the fundamentals.  This is a TFF, a titanium framelock flipper, and the show side (non-locking side) is a basket weave carbon fiber.  The original ZT450 was light but had some issues, as you can see in the review.  This is even lighter tipping the scales at a meager 2.7 ounces.  The .2 ounce weight savings over the original is probably not worth the upgrade.  But this knife runs ZDP-189 and while it is not a straight upgrade to the very competent S35VN, for reasons I will detail below, I believe it is a better steel.

I carried the ZT450CFZDP for a month, swapping it in with another knife I like, the Chris Reeve Mnandi.  I also just finished a testing period for the Benchmade 555-1.

Like with most knives, I didn’t set out to abuse it, I just used it during my daily life.  This included a lot of box deconstruction, package opening, and food prep.  In particular, I like to have a simple lunch on Saturdays, usually outside and almost always with my boys.  A cutting board, an apple or two and some cheese is our usual fare and this knife was my tool of choice.  I also had the need to cut a few different kinds of rope.  First, our old tree trimmer broke and I was salvaging parts, including the rope draw on the spring-loaded cutter.  Second, I was making some lanyards for new fixed blades.  The ZT450 did all of these tasks well.  It is important to note that the apple and cheese are a good challenge for ZDP-189. 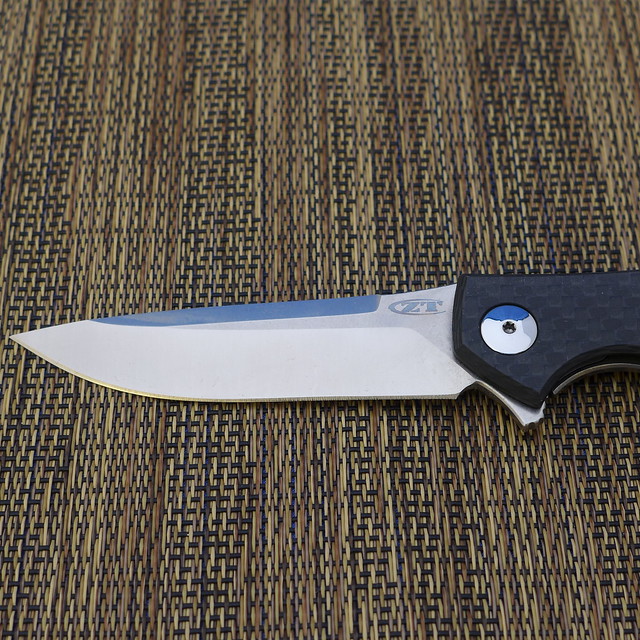 While it is more than technically a stainless steel (the chromium content is 20% and the threshold is usually around 12-14%), it can stain easily given the 3% carbon content.  Here, with a stack of apple slices, it was fine and didn’t tarnish.  In rope cutting, the ZDP-189 was insane.  The combination of an exceptionally thin edge and ultra high hardness meant that I could crunch through cord for days without the need to resharpen or even strop the knife.

Overall, I think the knife’s size is close to ideal for EDC purposes–with the 3.25 inch blade and the under three ounce weight it can handle most tasks and yet it is still virtually invisible in the pocket.

I appreciate the bit of thumb ramp that Sinkevich’s design called for, but I wish there was no gap between the handle and the tang of the knife in the closed position.  This invites lint.

One other point in terms of design–I dislike the parrot beak on the rear of the blade.  Its not the best thing in the world to begin with (for a parrot’s beak done right, see: Ethan Becker knives), but as positioned I found it hit my hand in the wrong place often.  I do like the bold contrast of the high polish pivot and the textured carbon fiber. 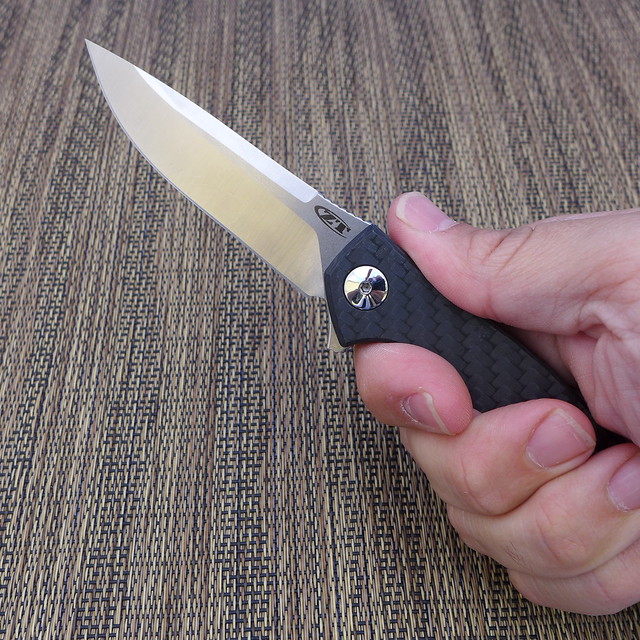 There are very few things on this knife that bother me, other than the parrot’s beak.  The clunky detent from the titanium original is gone.  This knife fires quickly and consistently.  Even if I try to pressure the lockbar it still works most of the time.  A vise grip on the end of the lock bar closest to the pivot can lock up the blade, but you have to be trying to do this.  Lock-up is great, rock solid in every direction and the lock is easy to engage and disengage. 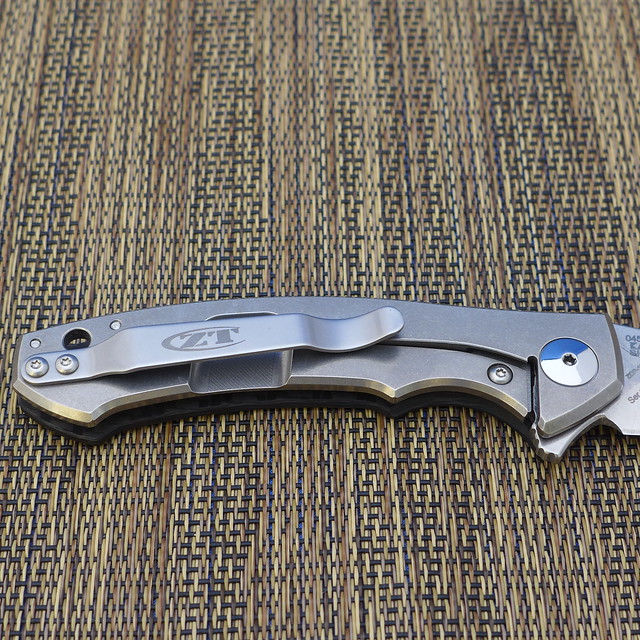 The grind here is really good.  The edge geometry is good, and though I can’t say for certain, this knife did better cutting and slicing apples instead of popping them compared to the original ZT450.

Finally, I really like the very mild but effective texturing on the carbon fiber handle scale.  It is subtle, adds some visual interest, and it is still grippy.  Overall, this knife is a small but consistently noticeable upgrade over the original ZT450 in terms how the design was put into place.

Don’t sell your ZT450 for this knife unless you really like carbon fiber or ZDP-189.  But if you don’t have a ZT450 and are thinking about getting one, this is the one to buy, if you can find it.  Many if not most online retailers are sold out.

It is a very good all-around EDC blade with a good price for the materials.  You’d be hard pressed to find a smoother flipper for the money.  Only the nicest Kizers rival this knife.  Now if someone could just explain to me how KAI got ZDP-189, an embargoed steel from what I understand, out of the US to make this knife here, I’d love to know.