Bark River has been making truly astounding fixed blades for years now. Their choice of steels, their fit and finish, and their on-target designs have made them one of the absolute go-to choices for fixed blades. Like the Sebenza for folders, the Barkies I have handled have had the top shelf production of custom fixed blades and the price and availability of a production knife. That combination has served Chris Reeve well for years and it looks to be doing the same for Mike Stewart and company.

Figuring out which blade to review is difficult and in an effort to hit the absolute epitome of a brand, I settled on the Bravo 1. The Bravo 1 is one of the older blades that has been in continuous production in their line up. It is also one of the most straightforward designs. But, in terms of Bark River hallmarks, it is all there–the convex ground blade, the highly contoured handle slabs, and the performance-above-all-else blade shape. If there is a knife that best embodies Bark River it is the Bravo 1.

The real dilemma wasn’t which knife, but which version of the Bravo 1 should be reviewed. In the end I went with my personal favorite: the 3V LT with no thumb ramp. The 3V steel is incredibly tough and hard and the LT design, which is 1/16″ thinner than the normal Bravo 1, exploits this hardness, and adds some slicing ability.

The Bravo 1 is a general purpose knife, often referred to as a camp knife. The idea is that it is big enough to handle chopping tasks, but small enough to be carried on your person and still do some food prep. The blade is just under 4 1/4″ long and weighs around 6.6 ounces. 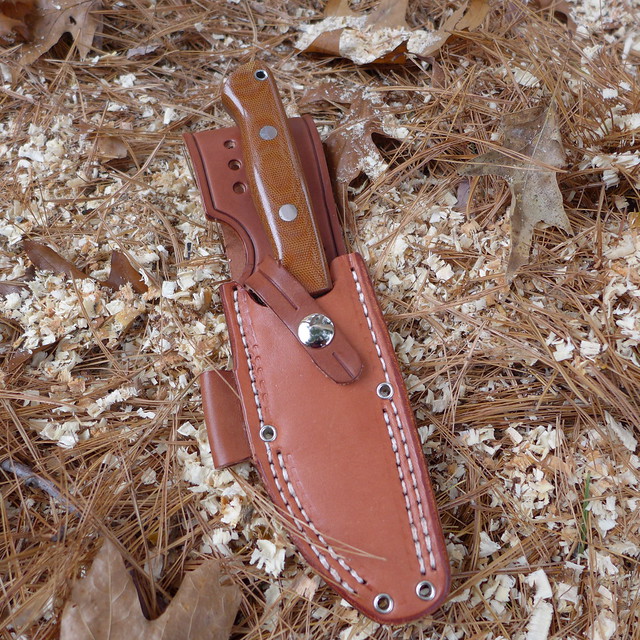 It comes with a tooled leather sheath. The knife is a full tang construction blade, with a huge variety of handle materials. In my case I chose micarta. The handle slabs are attached to the tang of the blade with epoxy and Corey bolts. The handles are then heavily contoured. The blade itself is a grinder satin convex ground blade

This particular knife was purchased in the fall and I used it throughout the fall and winter. In particular, I used the knife to process limbs that were cut down on my property. It was helpful in delimbing, batonning, and as a complement to an axe and a chainsaw. In the end I processed (with the help of my six year old son) a tremendous amount of green oak and maple. The process took roughly 16 hours and the Bravo was one of three knives I was testing at the time. After the wood processing I used the knife to do fire prep tasks, to process recycling (especially breaking down boxes), and in food prep rolls (slicing grapes, apples, and other fruit, along with some sandwich making). The Bravo 1 was put through what I think is an extensive and representative sample of tasks.

As with most, if not all Bark River knives, the Bravo 1 is a handle-centric design. The blade shape is a conventional drop point that is masterfully implemented, but it is really the handle that makes the knife incredible. One thing that many fixed blade aficionados look for in a knife is what they call “Coke bottle” handles. 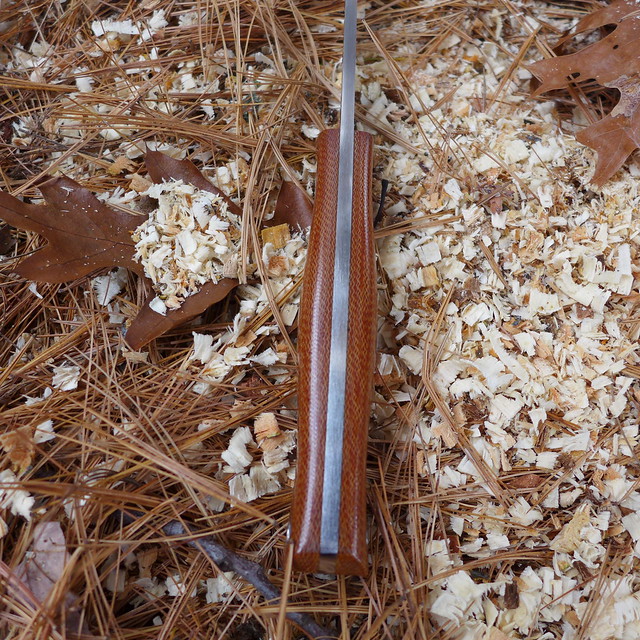 SHOP NOW
By that, they mean that the handle, when viewed from above, as a nice swell both in the middle and at the end of the handle. Here, the Bravo 1’s handle, which is carried across the entire Bravo line with a few minor tweaks, is a great example of Coke bottling. And the end result is a supremely workable and comfortable knife in the hand, even after hours and hours of grueling work.

The thin (relatively speaking) steel is actually easily thick enough, but knowing that it is the uber-tough 3V gives me a ton of confidence. In doing things like slicing salami, I found the Bravo 1 was surprisingly good. It’s not kitchen knife slicey or even as slicey as something like a Spyderco Delica, but for a knife that you can baton through green oak, it produced nice, thin leaves of salami, and it clean cut apples and grapes. The LT’s dimension are very compelling and I have hard time imagining a better sweet spot between thickness and slicing ability in a knife this size. It is also nice to see a steel being used to its fullest. By using 3V with its superior toughness, Bark River can get away with thinner blade stock. This is not just a bullet point on a product sheet. This is a good and intelligent use of steel.

The sheath is a very traditional leather number. It is wide and stiff with some tooling and decorative holes. It is a loop over design and it has only a single position. There is also a retention strap with strong, positive snap to it. It is a very by the numbers sheath.

Overall, there is nothing at all to complain about with the knife itself. The fit and finish is, literally, gleaming. In fact, the handles are a little too gleaming and slick out of the box. A few hours of use and they are dull enough to provide some real grip. The grind, a Bark River hallmark, is superb and it allows the knife to be resharpened with ease. Stropping is all I ever did, and aside from a small chip in the belly, the knife returned to hair-obliterating sharp almost immediately. The sheath, while well made, is poorly designed. I’d much prefer a sheath like the one found on the Bark River Adventurer, and I would certainly prefer one without the retention strap on the live edge side of the knife.

Overall, the Bark River Bravo 1 LT in 3V is one of the finest fixed blades I have used. It holds an edge for a long time, and the edge comes back in the blink of an eye. The handles are superb, among the finest on a production knife anywhere and certainly a peer to the benchmark handle design that is the Becker handle. The one stumble here is the sheath which I found to be hard to use and inconvenient. I would strongly prefer a snappy Kydex sheath or a Puuko-style tube sheath to the one given here. It looks fine on a horse saddle, but on a human like me, its decidedly less than great. But sheathes are hard and when a knife is this good, it just might be worth buying the blade with the intent that the sheath will be replaced.