5 Crossover Knives That Bridge the Gap Between Traditional & Modern If 2016 was the year that a bunch of knife knuts went back to their roots and discovered the joy of traditional knives, 2017 has been the year of the crossover knife. These are knives that have a lot of features of a traditional–slipjoints, thin ground blades, classic shapes, and some kind of nail nick, with the materials and performance of a modern knife–higher end steels and non-natural handle materials.

Having been a staunch opponent of traditional knives for a while then becoming a raging convert in the past three years, I can see the appeal these crossover designs have. There is a warmth and a personality in an old Pocket Worn Case that is missing from a gee-whiz uber tech titanium framelock flipper (TFF), not to mention the fact that the Case usually cuts circles around the TFF.  Here recently there have been a number of crossover designs that have caught my eye. These are my current favorites: 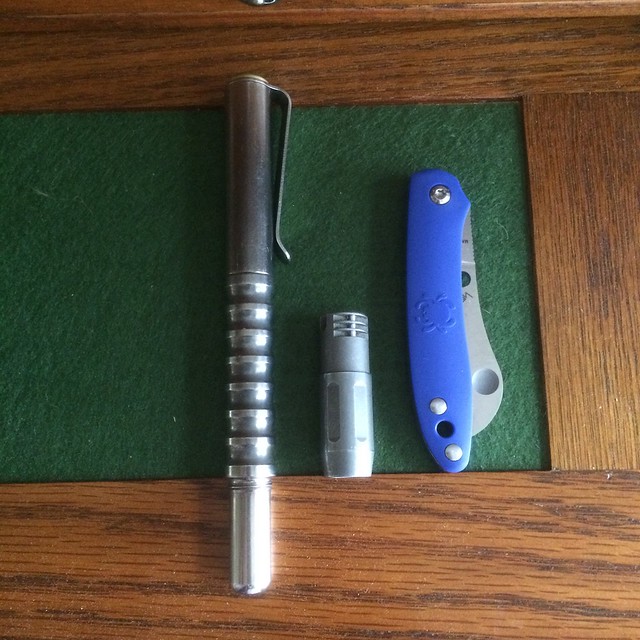 The Roadie is clearly more on the side of a modern knife in this crossover spectrum with its FRN handles and decidedly non-classical blade shape. But like many traditionals it is a speck of thing and a true pocket knife. It also slices quite well.

On my particular Roadie, the fit and finish are incredibly good and you will be very surprised that you can get a full four finger grip on a knife this size. The choil is Tardis-like in its size, it seems much bigger than it is. The opener, because this is a Spyderco, is still a circle, even if it is not a hole, so think of it as the Spyderco version of a nail nick. The fact that this weighs around an ounce and runs N690 steel, one of the better non-powder metal steels around, is a great thing.

This knife is a truly unique blade. It looks like no traditional ever made, but, in a design wonderstroke, it FEELS like a traditional. When I first picked up the Proper, I got it immediately. I couldn’t understand why there was no Case or Queen in this blade shape. And in the end, that is the ultimately complement–this knife does such a good job of evoking the traditional knife feel that you think it was one even though you know its not. SHOP NOW
The unit I handled had the spot-on fit and finish that seems to be coming back after a few years on hiatus. The maroon G10 is great looking, but nothing feels as great in the hand as Micarta and the green Micarta here reminds me of my Dad’s old Air Force jacket that still hangs in my parent’s garage in Ohio. The Proper just nails the crossover feel because of how evocative it is, but it runs S30V, a powder metal steel that crushes the high carbon stuff of traditionals in terms of edge retention. No knife is emblematic of the roll Benchmade has been on in 2017 more than the Proper.

Ah…AG Russell, the most underrated knife brand on the planet. Russell has been working around the edges of traditional knives for a decade now, slowly introducing features into his blades that keep their traditional look and feel but add modern convenience. The Gent’s Hunter II gives you a massive 3 5/8″ blade (its one inch wide!) that looks at home next to a big ole’ Lanny’s Clip. 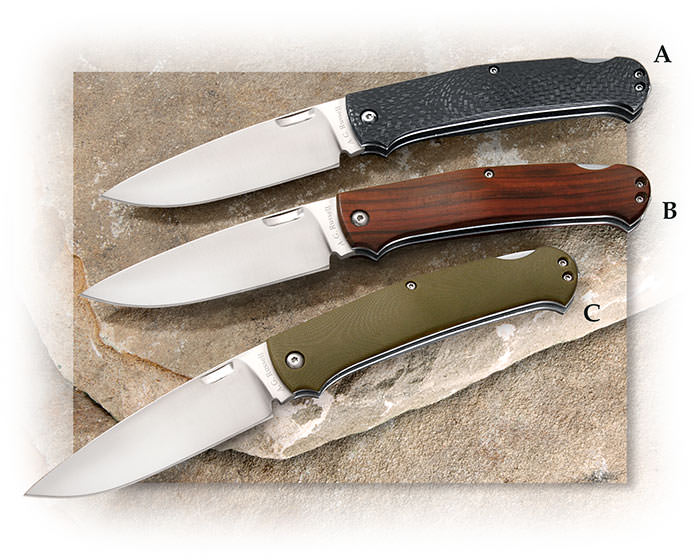 But the modernizing of traditionals bears fruit here: there is a nail nick deep enough to open the knife with one hand, either right or left handed and there is a ambidextrous pocket clip. The steel is 9Cr13MoV, a better than average Chinese steel. And that is another sign of the crossover–its produced overseas. Not a whole lot of Congresses or Canoes coming out of China in the 1920. The handle materials ride the line between modern and traditional too. You have a wooden scaled version, a G10 version in green, and a carbon fiber version. You also get a lock, which is unusual among this group.

This is on the more traditional side of the spectrum–the polar opposite of the Roadie. This is basically a Barlow, slimmed down a bit, with high end (REALLY high end) steel. The variety of handle materials runs the gamut from high tech (carbon fiber) to as traditional as it gets (stag). 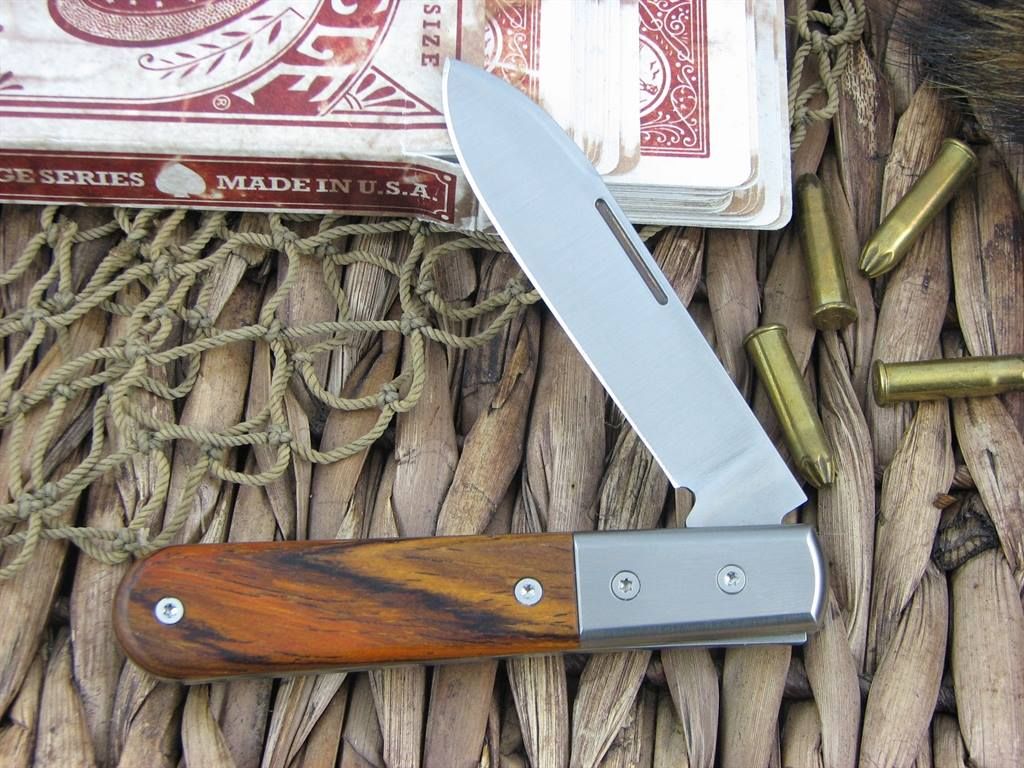 As an Italian maker interpreting an English form popularized in America, Lionsteel did an okay job. I don’t like the plethora of screws on the scales, but the bolster to handle ratio is just right for a Barlow. The blade shape is spot on and the nail nick looks good. I am also not a fan of the height of the exposed rear tang. Still, as a first effort, Lionsteel should be commended. Oh and if you want a traditional with steel you won’t have to sharpen until next decade, this is really your only choice. Not too many slipjoints out there with M390.

This is the weirdest of the knives on this list. In many ways it looks nothing like a traditional knife.  But it runs Micarta handles, as a funky slipjoint system, and is thin and slicey. Features-wise the Viper Dan IS a traditional, even if looks-wise it is a modern knife. Think of it like a supercharged Bentley–its a luxury sedan that can race. 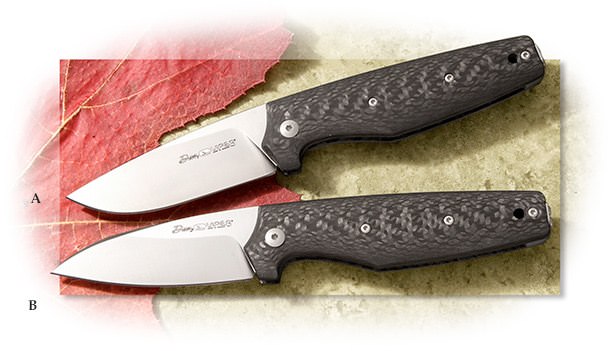 SHOP NOW
Cooler than most is the name, an acronym for Daily Assorted Needs. Viper is under no pretense here that this is pocket knife that will split kindling, but the blade shape makes it perfectly capable of food prep, box busting, paper cutting, and other random general use tasks.

Crossover knives are one of the most exciting parts of the knife world right now and you can find something in just about every price point from the $50 Roadie to a $200 Abalone handled Roundhead. These knives are great EDCs as they perform well and because of their old timey look and feel are less likely to scare people. Their lack of a lock, generally, makes them more broadly legal (though check your local knife laws).