This review sample was provided by Knife Art, where a complete line of Emerson knives and other high quality cutlery are available.

I have handled quite a few Emersons, from the most quintessential of them all, the CQC-7, to the weird and wonderful Roadhouse. I have also reviewed the Emerson/Kershaw Collab CQC-6K.  They are all well-built with good handles. The actual Emersons are true beasts, massive, overbuilt knives that deflect beatings like Superman getting hit with bullets. This is what they are known for, of course, but I have found that there is more to the Emerson magic than just being brutishly constructed.

Over the different models I have realized the Ernie Emerson really “gets” handle design on folders.  In fact, I can’t think of another designer that has been as consistently good at handle design as Emerson.

The drawbacks to Emersons are well known–first the chisel grind. I understand that it is better in the field, when sharpeners and strops aren’t available, but for the rest of the time (which is the vast majority of the time) they make simple cutting tasks difficult. Then there are the side effects of the overbuilt design. While some were okay, like the Mini A-100, even it was not that precise in the hand.  So, with these known quantities in front of me, I was a bit skeptical reviewing the CQC-10.

The CQC-10 is a hard-use folder.  It has the classic Emerson materials–154CM blade and black G10 handles. It also has the Emerson clip and, of course, the Emerson Wave feature that allows you to deploy the knife as you remove it from your pocket. 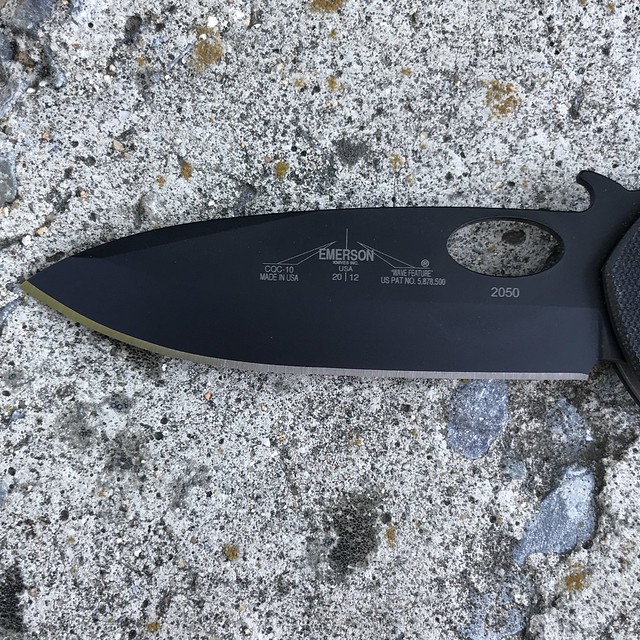 The liners are made of titanium and the left liner contains the lock, as is customary for a right-handed knife (like all Emersons because of the Wave, this knife is not readily ambidextrous).

There are dual detents on the CQC-10, a feature common on newer Emersons. This allows the heavy blade to remain stationary in the closed position.The CQC-10’s slow deployment comes via an oval thumb hole.

The knife weighs 4.7 ounces. The G10 here is exceptionally grippy, capable of sanding wood. After some use, it remained grippy but was less offensive. The 3.6″ spearpoint blade is thick and the handle is extremely thick. It has a conventional V-grind for the main bevel with a chisel-ground cutting bevel (note how much thinner the cutting bevel is in the picture below compared to the picture above). 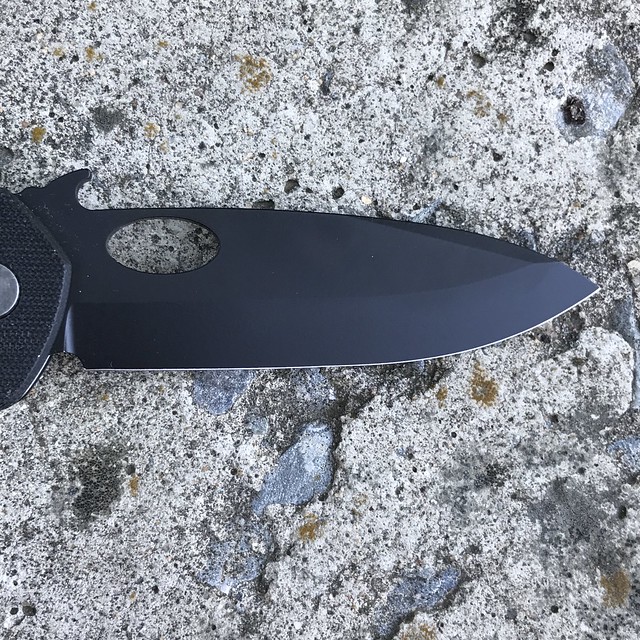 You can get the CQC-10 in coated or non-coated versions.  It is also available with a partially-serrated edge.

Unlike a lot of Emersons, the CQC-10 has a familiar blade shape. This isn’t some tanto grind that works great for door-stabbing and insurgent battles but is not so handy in non-warfighter scenarios. It’s a simple and straightforward spear point, much like my favorite Emerson design, the Mini A-100. The handle has an index notch and something of a parrot’s beak, making it my favorite of Ernie’s many great designs. 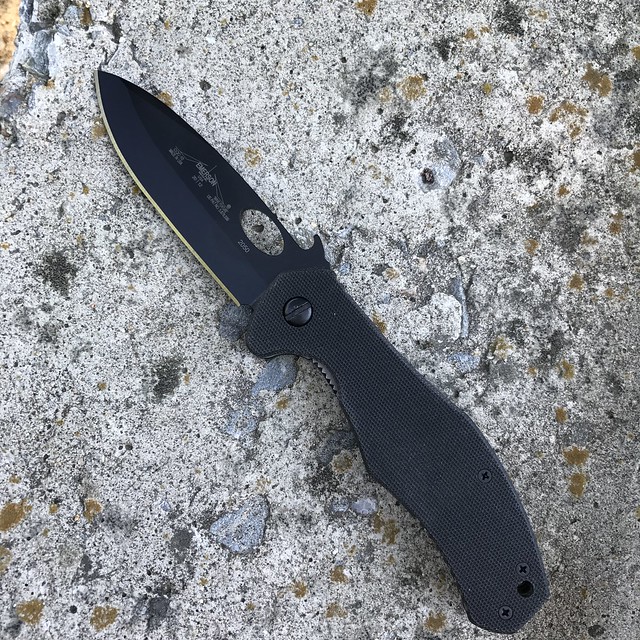 It’s not as pleasing to the eye as the straight lines of the Mini A-100, but it feels better in the hand.  I also like the simple blade shape. Sometimes I feel like there is just too much going on with Ernie’s blade designs, between the unconventional shapes (Roadhouse, I am looking at you) and the chisel-ground cutting bevel, I just get exhausted trying to make them cut. Not so here. The CQC-10’s blade is as straightforward as an Emerson can get. In the end, the only thing I disliked about the design is the chisel grind. For all its bulk and overbuilt feel, this Emerson responds in the hand and cuts without thought or effort. So many of the Emersons I have handled had issues beyond the chisel grind, but here, that is the only thing I can complain about.

It’s an Emerson, right? So while I did the usual food prep (it popped apples instead of slicing them, BTW), box opening, and cardboard processing that I do with every folder, I expanded the repertoire to include outdoor tasks.

I didn’t baton with the CQC-10, but I did everything else I would do with a fixed blade. If push came to shove or I was a person that really had to use the CQC-10 in those roles I have no doubt it would work. For me, Mr. Suburbanite, I just did some wood processing: delimbing branches for a fire and some fire prep. The chisel grind made feathersticks a real challenge, but prying apart pieces of wood was easy. There was no noticeable wear after more challenging tasks.

A few years ago I just didn’t get the Emerson thing. The knives were rough out of the box. REALLY rough. They were off-centered, the bulky blades fell out of the handles, and the handle materials were not nice at all. But in the past few years they have really stepped up their game. The double detent system works and seems to center the blade as well, as I have yet to have a poorly-centered Emerson recently. Lockup is tight, but disengagement is easy. 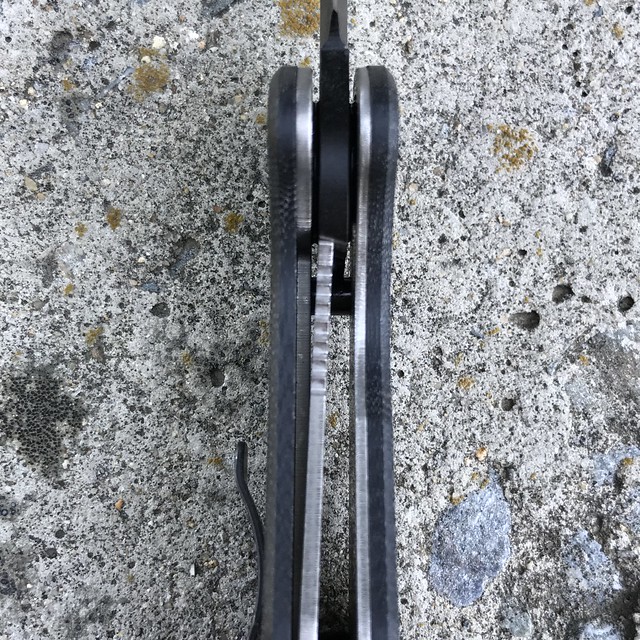 The knife is still stiff as a starched collar out of the box, but over time it breaks in and mine is now fabulously smooth, something I would have never said about older Emersons.

Finally, the G10 was offensively grippy at first, but now it is fine. I don’t know why they do that; a larger texturing pattern would eliminate this issue entirely without compromising grip. But at first, it was nearly impossible to Wave the knife open because the pivot was so stiff and it was hard to pull the knife out of the pocket. Now, it is no issue at all. The clip, as always, is darn near perfect, though it came a little scratched out of the box. 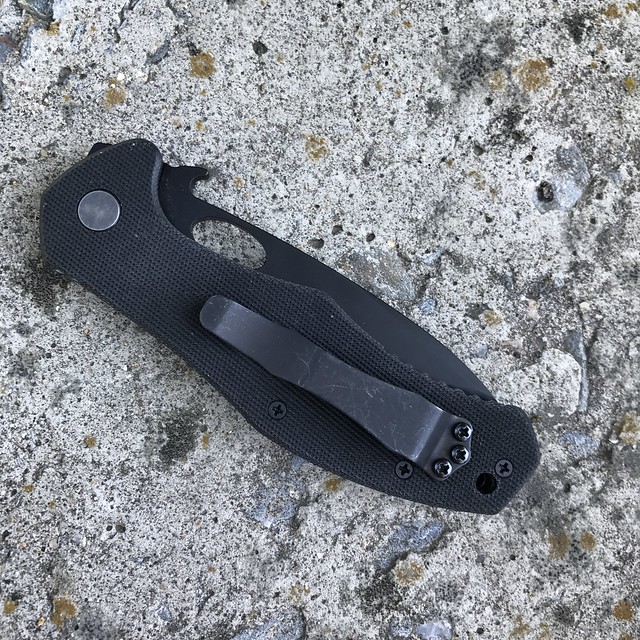 Emersons are a different breed. They are tough, rhino-like knives. They have unconventional features, like the Wave (which is awesome) and the chisel grind (which is not). But the CQC-10 is without question my favorite of the big Emersons. It’s simple blade shape and great handle make it a very good choice if you are looking for a hard-use folder.

The knife is good enough that you can probably justify dealing with the chisel grind (BTW, if they are going to do a chisel grind on a right-handed knife, can they please to it on the left side of the blade, so that I can register cuts easier?). If the Paramilitary 2 is too dainty and you can’t carry a fixed blade, an Emerson is a natural choice. And if you are choosing among Emersons, you should pick the CQC-10.  It’s a gem.

You can find the entire Emerson line, including this knife at Knife Art. They were kind enough to send me the review sample for this review.