Busses are the Paganis of the knife world: they are exotic, expensive, and very hard to find. And like Paganis they are really an enthusiast-only brand. When it comes to choppers lots of folks know and have experience with KaBar, ESEE, and Bark River. They could be seen as the Porsche or Lamborghini of the chopper realm, excellent performers, but comparatively common. The head snaps and IG posts that follow even a single Huyara or Zonda prove their rarity. Busses aren’t that far behind. And really, how else could you get away with selling a fixed blade knife without a sheath?

I was very lucky to have access not just to a Busse but one that had been tweaked by their custom shop. The end result is a beautiful, well-made, and impressive fixed blade. It is a knife that easily hangs with the best fixed blades out there short of the collectible stuff or high end art knives. The SAR 7 is a great blade, showing a degree of refinement that you probably would not expect from a company that brags about folks shooting their knives with firearms.

This knife was a loaner, but the lender was kind enough to tell me this: if it breaks I dont want it, so do what you want with it. Given that, I didn’t baby the knife. I was cognizant of what it was and that it was not mine, but I certainly didn’t primp over the knife. That said, I never test knives via abuse. I am not sure what that kind of testing proves and I wasn’t about to change that policy for this knife, despite the Busse’s legendary toughness.

The SAR 7 is a large fixed blade with a blade length of 7 inches. This makes it large compared to most fixed blades but in the midrange for choppers. As a Busse, the knife is design for hard use and for chopping.

The handle on the SAR 7 I reviewed was made of paper micarta and featured striations. The spine was crowned and the inside of the finger choil was also crowned. The INFI steel, a Busse exclusive, had a bright belt grinder satin finish. The handle easily accommodated a medium sized hand. 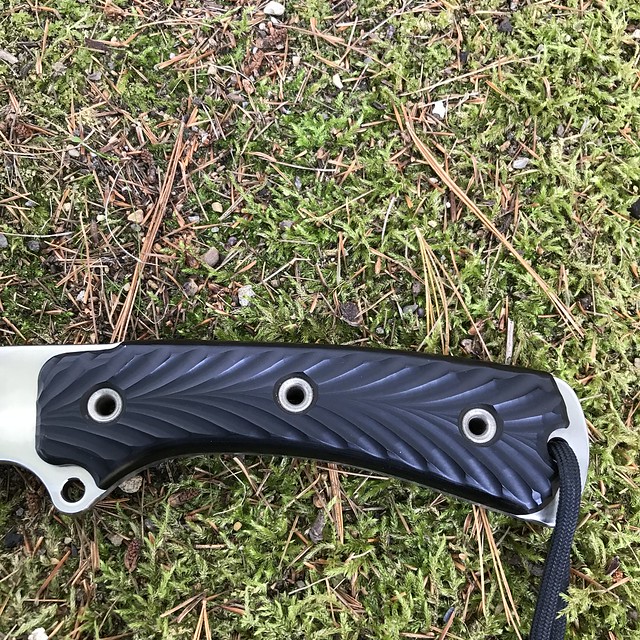 The knife is a full tang design and there is a prominent rear tang after the handle to allow for hammering. As is customary, the SAR 7 did not come with a sheath of any kind.

Given the license I received from the owner, I did quite a bit of work with the Busse. I received it in the middle of fall 2017. It was just before the weather turned cold enough to require a jacket. Given that, I did a lot of fire prep tasks—batonning, bark removal, and the creation of firesticks.

I also used the knife to build the foundations of a lean-to in one of my most frequented outdoor spots. There were a lot of saplings and they were quickly chopped down and processed. As the winter moved in the lean-to became a fall-over-to thanks to a quick and heavy blast of snow in December, but the SAR 7 was perfect in this role. The chopping and shaping (some sticks needed pointed ends) was a great test for the SAR 7’s edge holding ability as these saplings were mostly hard maple.

The SAR 7 is, as I referenced above, a medium sized big chopper. As with most knives of this ilk it has a blade heavy balance point, a blade larger than the handle, and thick blade stock. I am impressed that even on a knife this large Busse has the presence of mind to include a choil. Its not likely that I will be using this knife to make radish rosettes or other fine detail work, but when you have the extra cutting edge real estate it seems silly not to at least create a true choil. It also make sharpening easy.

I also likely the pass-through portion of the tang. That small feature makes a big difference as it allows you to hammer stuff and to drive the knife into material with a baton. I am convinced this should be a feature on every big chopper.

Aside from the normal design features there is, of course, the small matter of the steel. I am not going to wade into the “is it worth the money” debate here. Nor am I going to go all CSI: Steel on you. INFI is a steel/heat treat that is exclusive to Busse. Busse claims that INFI is exceptionally tough, virtually stainless, and holds and edge well. All of that is true. 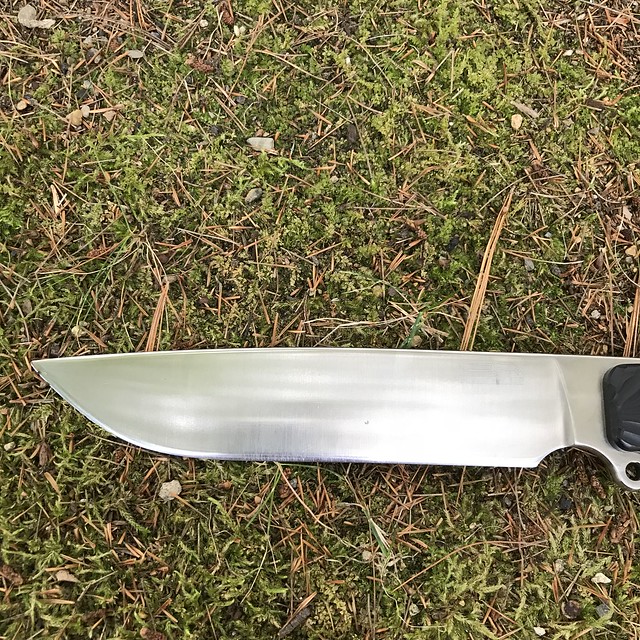 I used the SAR 7 right next to my Bark River Bravo 1 LT in 3V and INFI hung with 3V quite well. But one thing that Busse does not do a good job of bragging about is just how wonderful INFI is to sharpen. There is no single steel I can think of that is this robust in the field and yet still approachable on the stones. Whatever small margin, if any, INFI gives up in terms of toughness to 3V it makes up for in terms of how easy it is to sharpen.

I also had zero problems with staining or tarnishing, something I cannot say for 3V. INFI is awesome. Its better than advertised. Don’t fret too much about its Internet-related controversy.

If you told me I was going to review a Busse, I would have prepared the normal “this is a hard use” knife caveats–its not going to be refined, it has a rough and tough design, its got a coating as thick as cake frosting. Not here. This version of the SAR 7 was, simply put, superb. The mating between the handle and the scales is flawless. The spine is crowned (sorry Bushcraft Guy—no spark throwing here, perhaps you can use found flint to do this job because nothing screams “bushcraft” more than leather moccasins that smell like flint). Even the interior radius on the finger choil is rounded over (a brilliant touch I have not seen before). 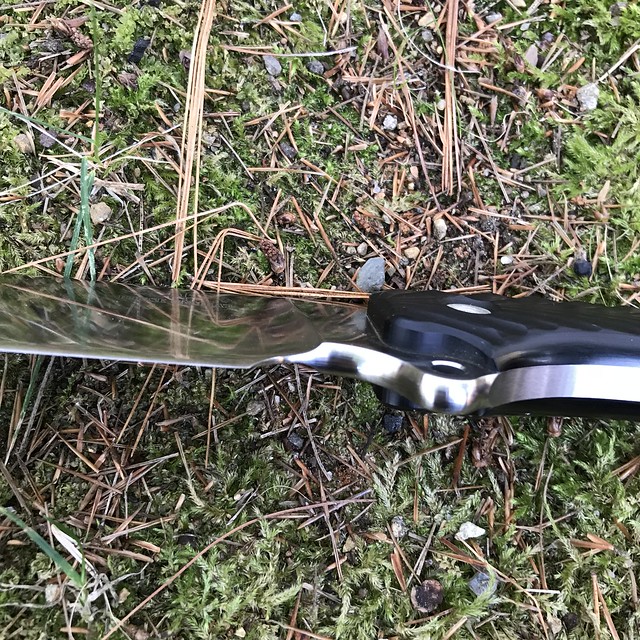 I am really impressed as to how nice this knife was made. Plus, no coating, just beautiful grinder satin INFI.

In use I very much liked the slightly smaller 7 inch blade of INFI as a big chopper. These 10 or 12 inch behemoths just don’t offer much more utility (unless you are looking at something like the M18 from TM Hunt, which is a another story for another review). Its big enough to do real work without wasted blade length that makes the knife too heavy. INFI is amazing. The entire knife is a wonder, but it is what you don’t get that makes the knife a bit of a challenge.

No sheath is unacceptable under any circumstances. You know this going in, because, after all, almost no Busses come with sheathes, but still. In my mind a sheath is about 1/5 the overall value of a fixed blade, and here this great knife starts out in something of a hole. Just shipping the knife was a nightmare because of the lack of a sheath. With a good sheath—a kydex number with a decent belt attachment system, this knife would be world class. A knife without a sheath is like a bullet without a gun.

Great knife, amazing steel, needs a sheath — in other words this is as Busse a knife as you can get, and that is, for the most part, a very good thing.