The knife in this review was provided by Blade HQ. If you would like to purchase this knife or one of the many thousands of other knives they stock, go on over to Blade HQ and take a look.

Bark River Knives made their name with well-made, high-performance fixed blades. The key to these knives was the Bark River convex grind. Other companies made knives with convex grinds, Fallkniven, for example, but in today’s market Bark River is synonymous with convex grinds moreso than any other company. Their strength, stability, and ease of maintenance make it difficult to find fault with these beautiful grinds.

They fact that they are all but impossible to make with machines alone gives convex grinds a human breath of craftsmanship missing from other types of grinds. The Bravo Series, the Fox River, the Canadian Series, and the Aurora were all quintessential Barkies and all sported wonderful almost-full-height convex grinds.

But Bark River, like everyone else, follows trends, even if they do so in their own particular way. The Bark River Bushcrafter was a nod to those trends. With its vaguely Woodlore knife shape, the Bushcrafter is still a Barkie because it has a partial-height convex grind (which Bark River calls the scandivex grind). As is the case with all successful knives, Bark River iterated on the Bushcrafter to create the Mini Bushcrafter. This is a knife designed for intense detail work. Given that mission and design purpose, how did it do? Let’s take a look. 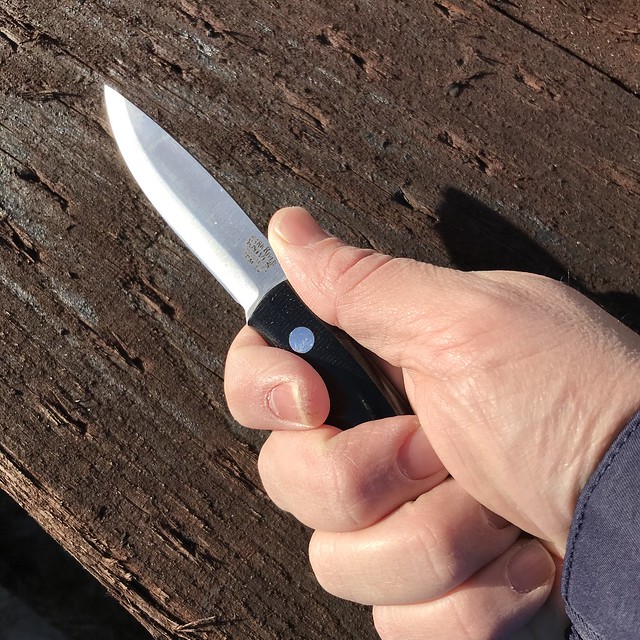 The Mini Bushcrafter is a small fixed blade knife, small enough to fit in a pocket when sheathed, but only barely so. The review sample is made of straightforward materials–polished black G10 handles, Corby bolts, and a thin stock of Crucible’s CPM 3V. It comes with a thick, beefier black leather sheath with a belt loop. Oddly, the handle is shorter than the blade, giving even folks with medium-sized hands only a three-finger grip. The blade itself has both a belly to it and a bit of a swell along the spine. The spine is crisp enough to use as a scraping tool for fire starting. The knife has a partial-height convex grind — the so-called Scandivex grind. 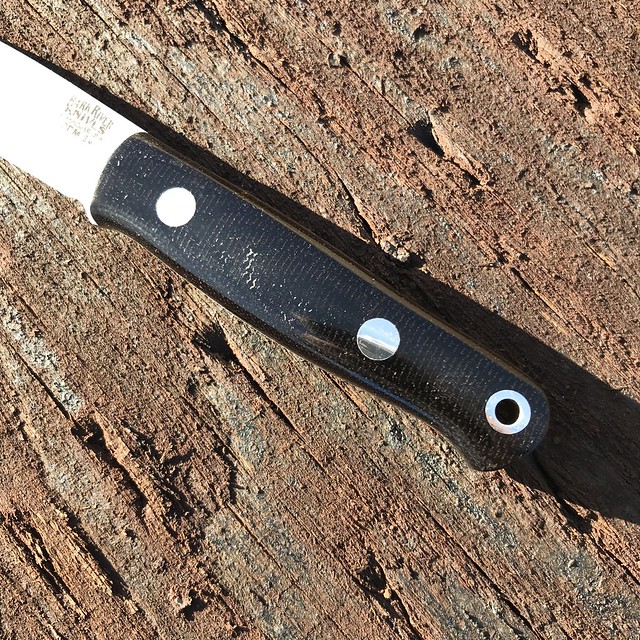 The handle has a very modest palm swell and bird’s beak with no Coke bottling. The balance point for the blade is well behind the base of the cutting edge, giving the knife a very handle-heavy feel.

Because this is intended as an intense small outdoor blade, I did a wider variety of tasks with the knife than I do with a general use EDC style blade. In addition to the normal food prep and box opening, I also did quite a bit of whittling and debarking. Overall I spent about three to four hours on these tasks in two sessions. I also broke down very large, very heavy cardboard boxes with the Mini Bushcrafter. While the whittling and debarking was tough on the edge, the 3V held through the entire process, ending the ordeal shaving-sharp. The two massive boxes were tougher. I was able to finally kill the edge around the middle part of the second box. It would no longer cut, but instead tore the cardboard. A pair of minutes on two strops and the edge was back to slicing sharp, if not full-on shaving sharp. This is the blessing of a convex grind–easy mindless maintenance gets an edge back quickly.

The design here is a good one–simple, straightforward cutting with very little extraneous stuff. I’d prefer a longer handle, but that is just a preference. 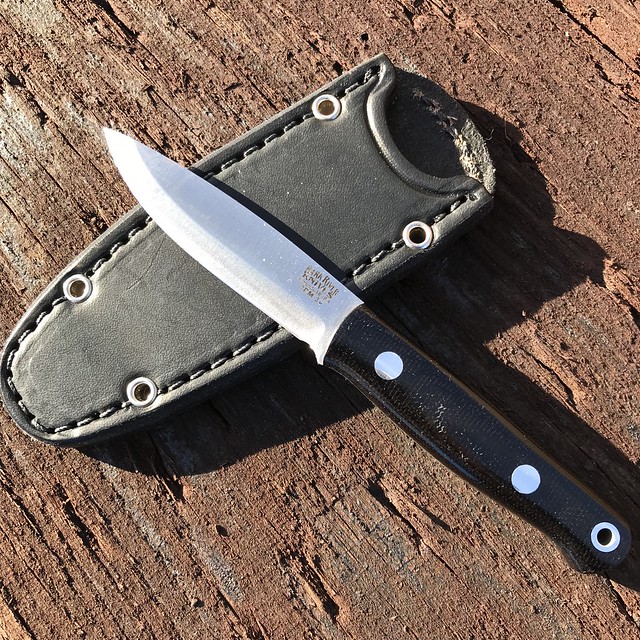 The sheath is good, even if it is sin-ugly. The welt and edge are just terrible-looking, but in terms of actual performance, it is a solid design. The thin blade stock is absolutely 100% the right choice. I am not sure why this partial grind is better than a taller convex grind, but like the sheath even a 1/2-height hollow grind works well here.

There are a few very minor cosmetic blemishes on the Mini Bushcrafter. One of the plunge lines down to the ricasso gets a bit swervy. 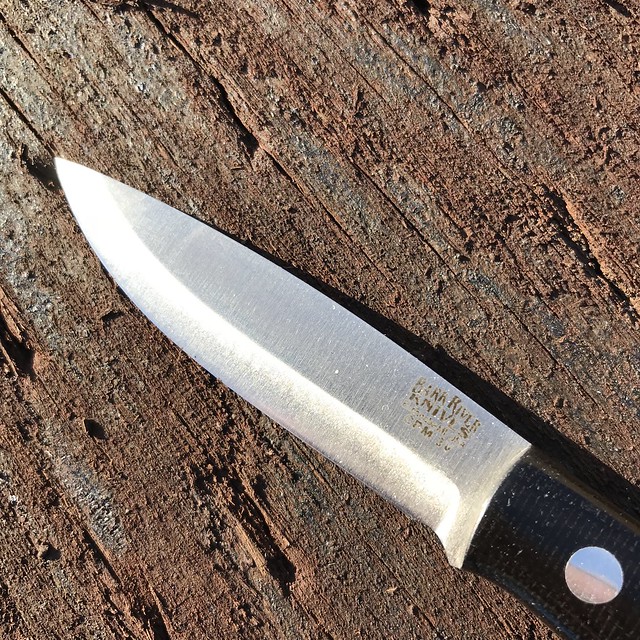 The grind lines aren’t all that distinct, something I would like to see on a knife as pricey as the Mini Bushcrafter. And there is, of course, the sheath. But the overall feel of the knife is one of very high quality with good attention to detail. None of the fit and finish issues compromise performance, and many of them of just part and parcel with the way in which Bark Rivers are made — one at time, by hand, with a belt grinder.

This is not a knife that, in theory, I was set to like. The blade:handle ratio is just off for me. But gosh darn it, over and over again while testing and using the Mini Bushcrafter, I was proven wrong. The knife works exceptionally well in hand. It carves, slices, cuts, and does detail work with incredible proficiency.

This is why we still need to review knives in hand. Our first impressions often prove right, but when they don’t, the reason why is fascinating and here that reason is simple: Mike Stewart and company know more about knifemaking and knife design than I ever will.

They know what works and what doesn’t, even if it looks a little weird. If you need a small fixed blade, this is an excellent, excellent choice. I prefer the Lil’ Creek with its bigger handle, but both are superb. It might be time for me to venture into the Mini Canadian waters. In the end, it is probably sufficient to say that this is a Bark River. That alone, in my experience, is enough to ensure it’s a darn good knife.