In 2018 there are two brands that are leading the way in the knife world–Spyderco, which is not much of a surprise, and Massdrop, which is REALLY surprising.

In case you aren’t aware, Massdrop is a website that both group buys products that people vote on and produces its own co-branded stuff.  The knife section of Massdrop has made collabs with Bob Terzuola, Eric Ochs, and many collabs with the brothers over at Ferrum Forge.  The first collab (I think…there have been so many) was the Crux, which was a mid-size titanium framelock flipper (3.3 inch blade).  That knife was a bit big and a big titanium-y, so Massdrop and Ferrum Forge went back to the well, shrunk the knife down a bit (about 10% in length and a smidge less in height).  The end result is the Massdrop x Ferrum Forge Gent.  It is one of the best knives on the market.  It also happens to be less than $99 in its basic configuration.

Though it is currently not available for sale, Massdrop has already done three runs of the Gent–the first run with black G10 handles only, then a second run with black, blue, and green G10 handles, and a third with premium handles–either Rosewood or Carbon Fiber.  I imagine given the success of the Gent, both critically and sales-wise, another run is in the offing.  Here is the product page for the Gent. 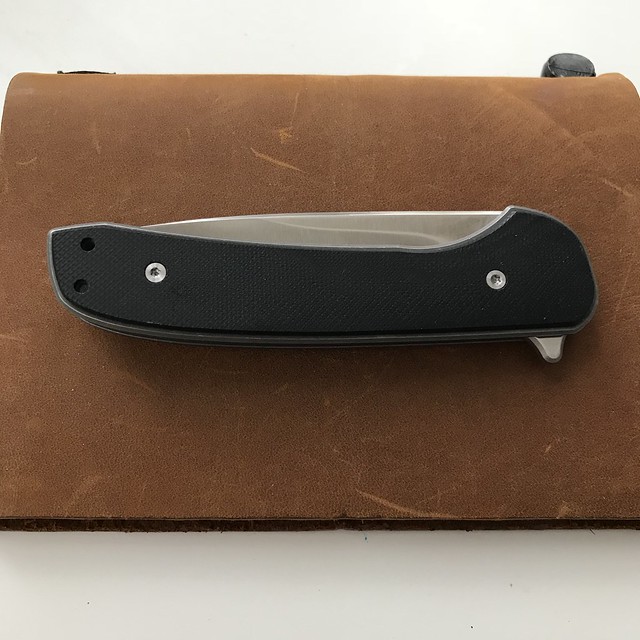 The Massdrop x Ferrum Forge Gent is a medium sized, general utility or everyday carry folder.  It is designed by Ferrum Forge, produced by WE Knives, and distributed and promoted by Massdrop.  The knife costs $79.95 in the basic materials when available and $99.95 for the carbon fiber and rosewood addition, again when available.  The knife runs S35VN blade steel.  It opens with a flipper and the blade rides on a bearing pivot.  The blade has a satin finish.  The deep carry, over the top pocket clip is discrete and easily mistaken for a pen clip.  The G10 cover is an onlay and it is letterboxed (meaning that the scale peeks out from underneath the cover just a bit).  The cover is also very gently contoured.  The blade is 3″, the handle is 4″ and the knife weighs 2.5 ounces.

In the time since I got the Gent, it has been my most frequently carried knife by a large margin.  In that time I have done all of the sorts of tasks that you do with a folder–food prep, fire prep, whittling, stick sharpening, processing materials for recycling, and box opening.  I have also used the knife on a number of woodworking projects to both score marking lines and also to clean up edges.  If you can do it with a folder, I have done it with the Gent. 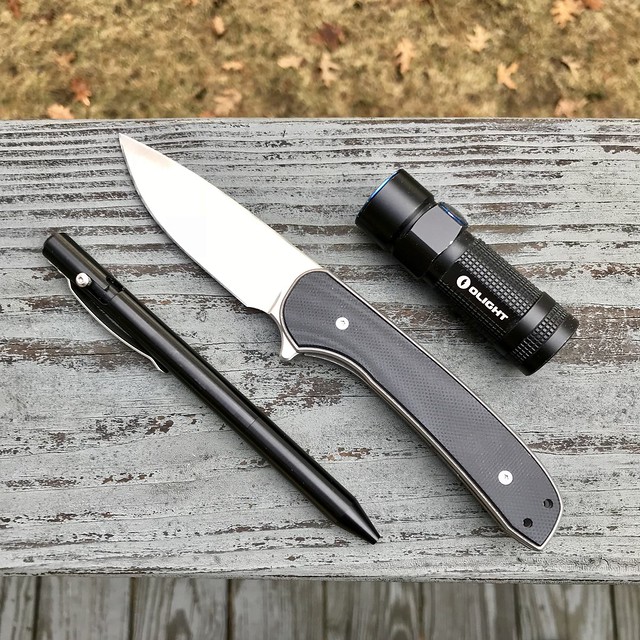 Overall, the design of the Gent is simply wonderful.  Its never too much, but always enough.  Its never too flashy, but it has quite a bit of style to it.  It is never too never, but it spans an apple nicely.  If you want a nice but not insane knife, the Gent is your deal.  If you want a “Grey Man” blade, the Gent is also the ticket.  Heck, if you want a folder for any reason, start here.  The drop point is a good choice for utility work, giving you a good amount of belly for rocking cuts, but still allowing for slicing and mild piercing cuts too.  The flipper’s shape is absolutely perfect, a key factor in making a good flipper.  It has no jimping so repeated use and putting pressure on the tab won’t give you a callus.  Finally, the clip is perfect, working well and being quite discrete.  Lastly, the choil is an excellent set of choices–it gives you the ability to fully choke up on precision cuts, much like a good Spyderco choil, but at the same time it allows for sharpening of the complete cutting edge, something Spyderco choils rarely if ever make possible.  This is a supremely refined design in dozens of little ways–a hallmark of a future classic. 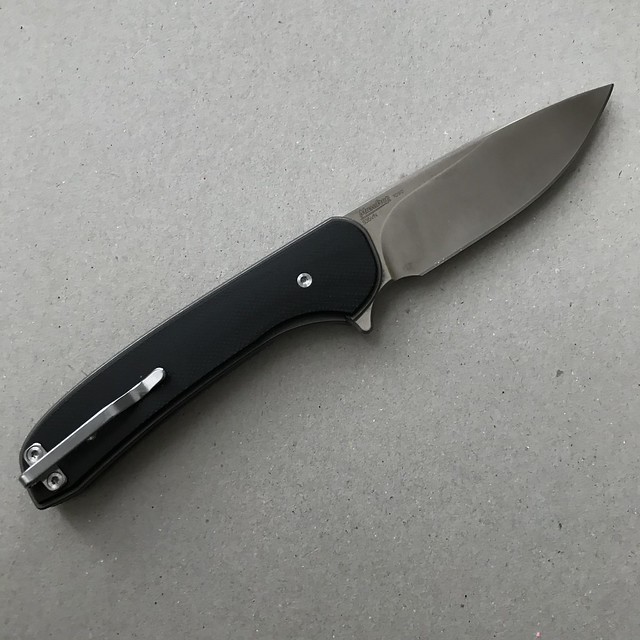 This knife is made by WE, one of the high end Chinese production companies, and the quality of execution shines through.  Other than a weird smudging issue with the steel (see above), everything else is spot on.  This is one of the best flippers I have ever used, production or custom.  It fires with authority, but the detent is still strong enough that the blade won’t shake out of the handle.  The grind on both the main bevel and the cutting edge is great.  Even the subtle contouring on the handle cover is well done.  This is, by the way, very nicely textured G10–good for grip, but not shreddy in the least.  Finally the clip’s polish not only looks nice it also makes retrieval and stowing of the Gent quite easy.

At $150 it would be a competitive EDC choice but at $80 this is one of the best two EDC knives on the market (the other being the FRN Chaparral from Spyderco, which is also under $100).  It is hard to find superlatives that fit just how good the Gent is.  I wear suits often and the Gent works well, never banging around or being a pocket pendulum.  But it also works well in jeans and shorts.  Its not a fancy or flimsy knife like the name might suggest.

The Gent is not just proving what custom fans know, that Ferrum Forge can design knives. It also proves that Massdrop is a real player in the knife game.  Its time to realize that Massdrop is capable of playing with the Big Boys.  They may not make two dozen different knives, but the ones they are putting out are really eye-catching and generally high quality models.

I can’t recommend the Gent highly enough.  It came out in early 2018, but thus far it is still the front runner for gear of the year this year.  Its damn good.  Go sign up and wait for another wave to be released.  This is a hell of a blade.