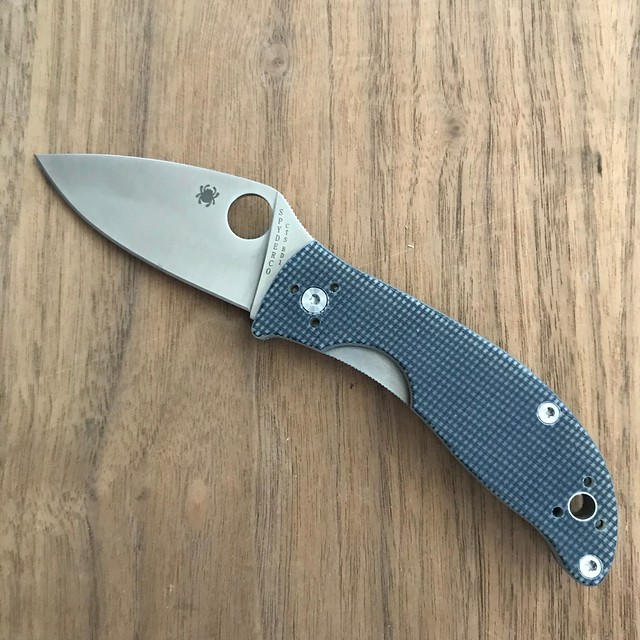 As a company, Spyderco tends to release a lot more “experimental” designs than other companies.  While ZT is happy to produce one titanium framelock folder after another, Spyderco zigs while others zag releasing things like the Introvert alongside stuff like sprint run steel versions of the Delica.  Strange knives are a thing for Spyderco and have been for a long time (Exhibit #2: Spyderco Gunting).

But they also have a few “by-the-numbers” releases all of which are focused on high value.  This started with the bland but popular Tenacious.  It was the exact opposite of the Introvert and thanks to its price point and size, people loved it.  They even release a whole line of budget folders, one larger and two smaller than the Tenacious.  They were “real” Spydercos that were the price of the Byrd line of knives.  Since then Spyderco as occasionally gone back to the by-the-numbers approach and released things like the Efficient, which was an excellent knife with a droopy appearance, and the Polestar.  Both were improvements on the meh ergonomics of the Tenacious (meh for Spyderco, for most other companies they were quite good).

But none of these budget folders hit all of the right points, in my opinion.  The Efficient was just kinda fugly and a bit too heavy and the Polestar was too big.  Then, a few months after the Polestar was released, Spyderco released the Alcyone, which was, according to some sources, a terrible selling knife.  The reality is, it is the best value Spyderco made and one of the most underrated blades out there. 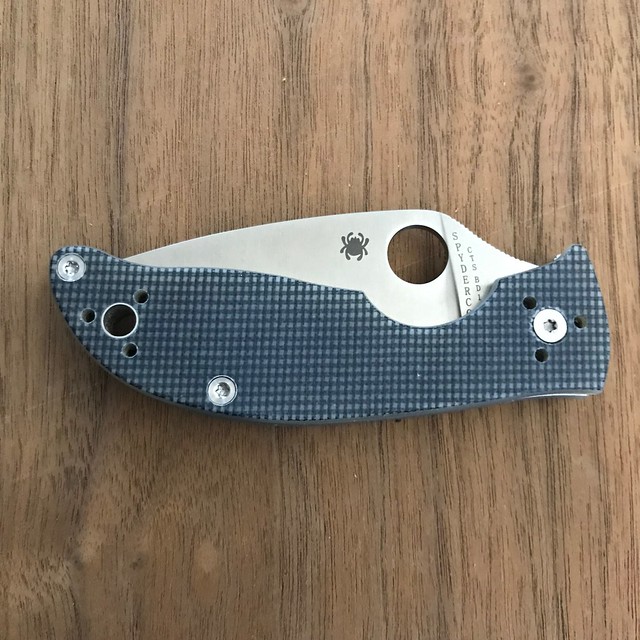 The Alcyone is an Chinese made Spyderco.  It was designed by Sal Glesser and sports check-patterned gray G10.  The knife locks via a linerlock and has a spoon-style Spyderco clip with the lanyard hole between the three screws.  The knife has a classic Spyderco blade shape with a full flat grind.  It has an open construction with three pillars and a lanyard tube.  The blade is 2.91 inches long and made of BD-1.  The knife weighs 3.3 ounces.  The clip is four-way positionable.  I purchase the review sample from Blade HQ. The Alcyone may be out of production, but it is still available online.  The street price is $61.72. 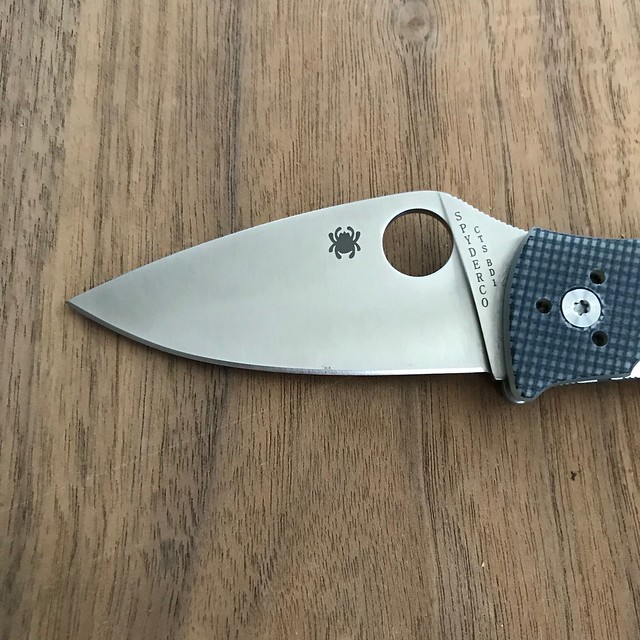 The Alcyone is an ideal EDC and for testing I carried for a two week period straight and then alternated carry with other knives for another six months.  The knife was excellent in the EDC role as it’s tall blade and thin, flat grind made it slice very well, just a step below the best slicers on the market, which includes knives like the Spyderco Chaparral and the TRM Neutron.  I used the knife in food prep and it excelled in that role, cutting and not splitting apples and processing cheeses and meat nicely.  I also did some box busting and it worked well there too, though the BD-1 wasn’t excellent hair popping after a few breakdowns. 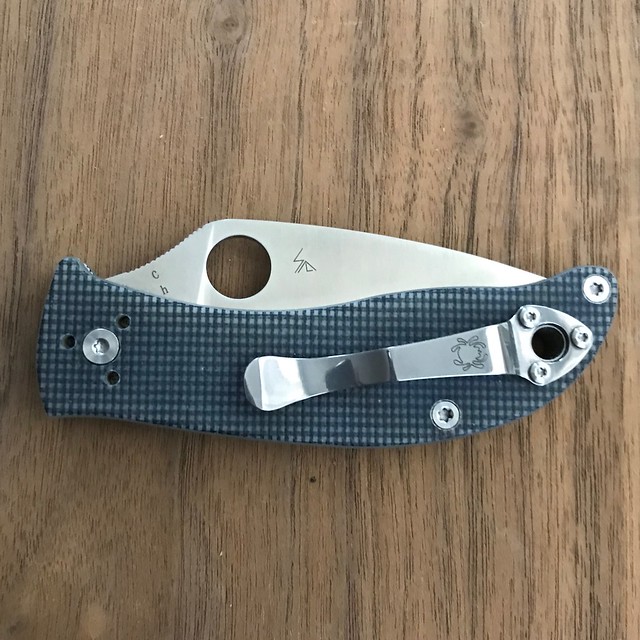 In many ways the Alcyone is the final evolution in a design approach that Spyderco really focused on five or ten years ago.  Looking back at the gen 3 Delica and the gen 3 Native, there are a lot of cues from those knives in this knife.  And those knives were pretty functional designs.  Since then Spyderco have moved on to knives with half and half finger choils, less humpy designs, and wire clips.  That’s not to say that the Alcyone is bad, its not–its just that Spyderco has moved in a different.  But, given its last gen design approach, the Alcyone benefits from years of insights.  It may seem out of step with the new hotness, but the Alcyone is very, very refined.  One slice of the blade will prove to you that this knife is an excellent user.  Suffice to say, even last gen Sal Glesser designs are still awesome.  One example is the handle shape.  Its simple, but still has a bit of a palm swell and a nice birds beak at the end.  This knife really fits in the hand quite well without the use of design crutches like finger scallops.  Think of it like the last special edition of the C6 Corvette while the market has moved on to the C7–you get a damn fine product even if it is a bit out of step with current preferences. 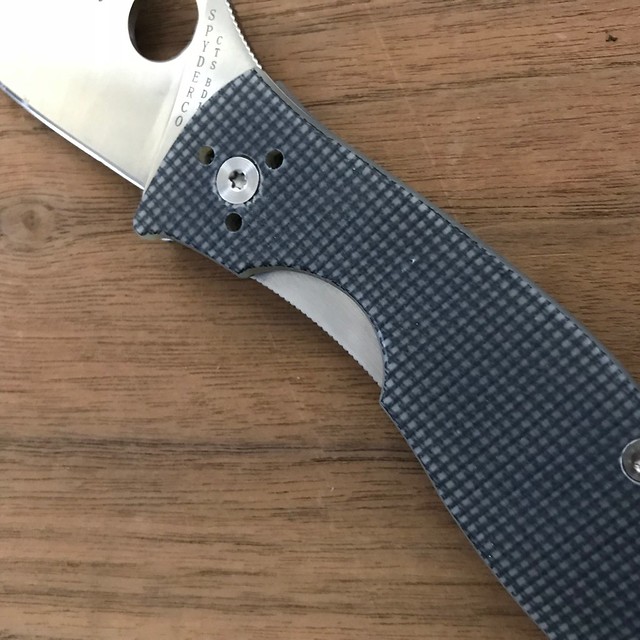 The bit surprise with the Alcyone compared to something like the Tenacious is just how well made the Alcyone is.  The Tenanciouses that I had were cursed with uneven grinds, wavy cutting bevels, gritty pivots, and bland G10 handles.  None of those things are found here.  The lock is rock solid and easy to access.  I’d even go so far as to say that the Alcyone has a bit of panache with the gray G10.  The edges appear to be translucent and the result is a budget knife that is neither bland nor forgettable.  The grinds are much better, the pivot is smoother, and the blade centering, something that lots of folks complained about with previous budget Spydercos, is dialed in perfectly.

With Spyderco’s recent MAP shift, even their budget offerings are expensive, putting more space between the bottom of Spyderco’s line and the top of the Byrd line, which, from a sales perspective makes sense.  So when I say the Alcyone is a budget knife, it is really compared to Spyderco’s line and not the market.  In a world where the TBFK exists, this is not a cheap blade.  But what those cheap blades generally lack is great ergonomics and the Alcyone has that in spades.

This is the best of the budget Spydercos.  It is the best of the previous generation of designs.  And, even as the market has moved on to other trends, it is still an excellent user.  At $60 or so bucks, its not the cheapest knife, but it is very good.  Unfortunately in this day and age where knives are for flipping (as in opening and closing), flipping (as in buying and quickly selling), or Instagram a solid user seems to have fallen between the cracks.  This is one underrated blade if you actually, you know, use your knives.