It’s taken me a long time to get to this point, but I think I can finally write an objective-ish review of a Mora knife. I have now had experience with two–the Companion, which is the subject of this review, and the Pathfinder.

In many ways the Mora, best exemplified by knives like the Companion, is a lightning rod of controversy. For some it is the epitome of survival blades–cheap, sharp, and tough. For others it is a sign that hipsters have taken over. I am not firmly in either camp, but I think the classic 4 inch fixed blade that Mora has become known for is a knife that you don’t really need to bother with unless it’s for fun, as a back up, or as a starter knife. The Mora Companion is to a real 4 inch fixed blade what Ikea is to the real furniture–a comparison all the more apt given the shared Scandinavian heritage of the two brands.

The Companion is best purchased at the same point in your life as Ikea furniture is–when you are just starting out and you need something (ANYTHING) that fills a specific role. Ikea gives you a couch shaped object that will suit your needs until you can afford a real couch, and the Mora gives you a knife shaped object that will suit your needs until you can pay for better. This sounds like a put down, but it really isn’t.  The Companion is a great starter fixed blade. It is a great blade to learn on, but you will very quickly run in to the knife’s limitations. When that happens you’ll either be fine with those limitations or want better. Like I said, it’s the Ikea of the knife world.

The Mora Companion is a fixed blade with a 4.1 inch blade of stainless steel. The specifications do not say which stainless it is, but I think it might be one of the Sandvik steels, probably 13C26, if I had to guess. The handle is a molded plastic/rubber grip.

The knife uses a partial, stick tang construction method. The sheath is a plastic tube.

There are wide range of colors available, from pink to foliage green. I picked a light blue model so I wouldn’t lose it in the woods.

In all, the knife is very inexpensive. I paid $18 shipped for the review sample. The blade itself is a clip point design with a true zero bevel Scandi grind (meaning the main grind leads directly to the cutting edge without a secondary grind that does the actual cutting). The blade has a smokey mirror finish.

I did all of the things you are supposed to do with a Mora (though I did not do them in skinny jeans nor did I do them with an ironic mustache). I did lots and lots of camp tasks with the Companion–cutting up small branches for kindling, whittling, making feather sticks, and doing food prep. I also did a lot of house stuff with the knife such as breaking down boxes for recycling bins and opening packages.

The Mora is loosely based on the Sammi Puuko design, an ancient knife used by natives of the high Arctic for centuries. More recently these knives have been popular in bushcraft circles and are praised for their acute cutting edge thanks to a zero grind (the cutting bevel and the main grind are one continuous grind). The handle on the Mora is an overmolded rubber and plastic handle. 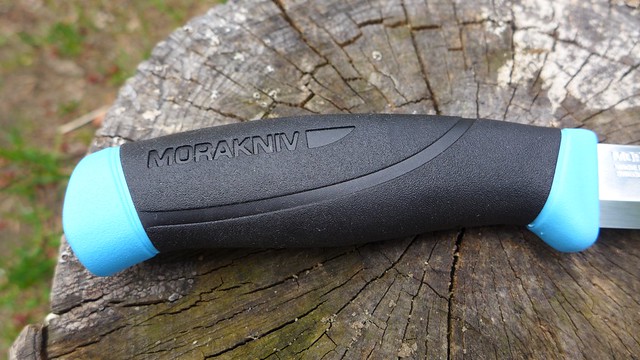 The sheath is a single piece of molded plastic. 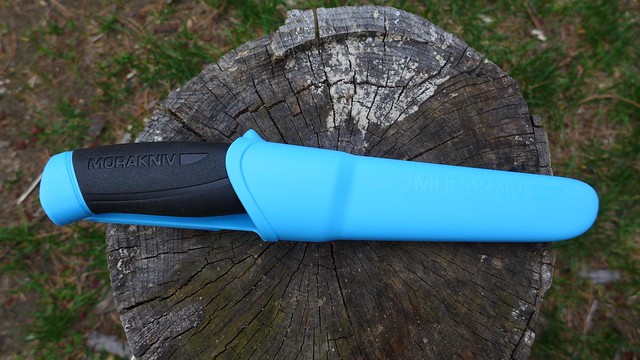 The entire knife is colorful (I chose blue) and plasticky. The handle is quite comfortable, filling your hand and producing ZERO hotspots. The blade steel is quite thin. This is a knife designed to slice and cut. There is no consideration at all for its prowess as a chopper.

Overall, the materials, fit and finish, and appearance are nice. Everything is snug, and the sheath, while simple, is vastly better than the standard “nylon sock” sheathes that come with knives like the BK-9. That said, in many ways, the Mora reminds me of Apple products–they look great the day you take them out of the package, but progessively worsen with each passing day.

The rubber handle gets chewed up by most cutting tasks that involve force. The sheath looks weathered in a few minutes. And the cutting edge, while sharp out of the box, dulls quickly, chips excessively, and is hard to sharpen back it is original cutting geometry.

The hand of an untrained person has virtually no chance of maintaining the zero grind (this is one of the reasons why I dislike this grind). I’d much prefer the ease of use of a convex grind or the straightforward sharpening of a flat or hollow grind. The best way to put it is this: out of box, the Mora is awesome, but after that it starts to disintegrate relatively quickly. Sure it is still a knife and only $20, but the rate at which the Mora drops off in performance was shocking compared to other knives.

If you like Ikea furniture, this is the knife for you. It’s cheap, attractive, and functional. But if you want to use something, come to learn its intricacies, and appreciate it over time, look elsewhere.

It’s not that the Mora is a simulacrum of a knife, it is an actual knife by every definition, but it cannot measure up to something like a Fallkniven F1z. I got that knife for around $100 and it will work at 97% of its out of box performance more than five times longer than the Companion. In other words, I am not CERTAIN that the Mora is the value everyone thinks it is. They are good values, no doubt, but they are not mind alteringly awesome, like some would have you believe. Buy-in is low here, I get that, and for a lot of folks, it’s plenty of knife. But if you want something you can use at a high level for years, the Mora is not your thing.