The Schrade SCHF36 has been out there a while, but reviews are few and far between (especially written ones). The reason is simple: this knife is part of a wave of knives coming into the US from overseas.

It is very difficult to figure out which of these knives is good and which are junk. It’s tempting to think of the SCHF36 as junk. Schrade, since closing down in the US, has been known primarily for its flea-market quality knives. In 2015, Schrade put a lot of effort into revamping is knives, and it started with fixed blades. The SCHF36 was the first of these knives to be released, and since then a lot of fixed blades have come out and they have all been decent, at least in terms of specifications.

Here is the product page. Though MSRP is around $45, you can find this knife for $32-$35 on most days, especially at local big box stores. My local sporting goods store, Dick’s, has these in stock for $35.

The SCHF36 is billed as a survival knife. I have no idea what that marketing speak actually means, but I have found that it works well in hard use tasks, such as batonning, and in camp tasks, such as fire and food prep.

The knife runs 1095 steel. The flat ground blade is five inches from tip to handle, but the cutting edge is probably a half inch shorter due to the forward finger choil. The handle is made of an impact resistant plastic called TPE. It is a bit rubbery to the touch, more so than FRN, for example.

The knife comes with a nylon sheath, and in the sheath there are a few extras, including a sharpening plate and a ferrocerium rod. This knife, like all of Schrade’s products, is produced in China. The blade itself is massively thick with 1/4 inch thick blade stock. The entire steel surface is covered in thick and coarse powder coating to lend the high carbon steel a bit of rust protection.

The overall package is quite heavy, coming in at 1 pound 4 ounces in the sheath.

The SCHF36 arrived at my house just as spring came. It was a blessing to be able to get outside and have a new knife, especially one that I had no fear of messing up. My son and I have taken to exploring a branch of a local railroad that is essentially abandoned (they use it to stow cars that are otherwise in the way). Down this track there are a series of collapsed and abandoned buildings and industrial structures, such as bridges and mills. 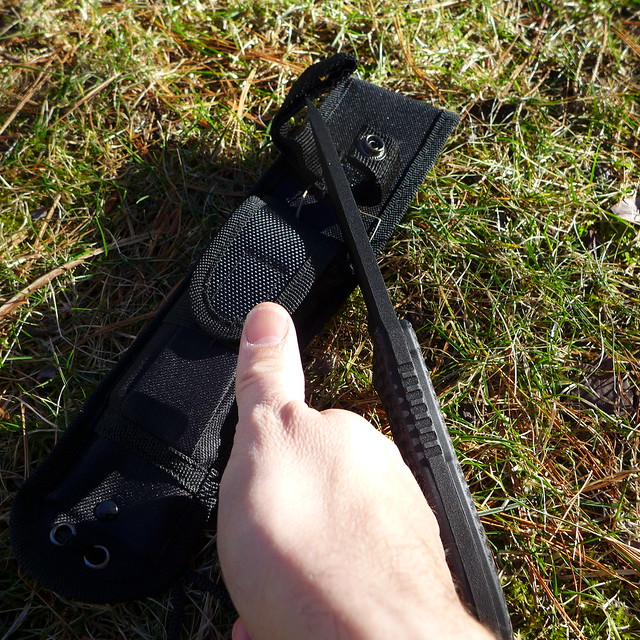 SHOP NOW
As nature comes back you find really amazing places. Our favorite place is a man-made waterfall that was undoubtedly built to generate some water flow to run mill equipment.  In this little space, which is hidden by a wall of bushes and trees in the summer, we messed around with the SCHF36.

There is a large, fallen oak that has started to decompose, and it offers an excellent surface to chop things. Saplings and branches were victims of the SCHF36 as we made a fleet of “boats” to go careening over the waterfall. We also split some wood for use in our backyard fire. The SCHF36 did a great job with all of these tasks. I also did some carving and bark stripping while my son arranged our fleet for their final mission.

Finally I tried to fell a thigh-sized tree with the SCHF36. It eventually happened, but it took an inordinate amount of work (especially because I then carried it over to the water’s edge and threw it into the river so that it would cascade spectacularly over the waterfall).

My fear with this knife was that it was too big to be a good cutter and too small to be a good chopper. There is some truth to that. The 5-inch blade does place some limits on the work you can do, but having had everything from a 1.5 inch blade all the way up to a massive 9 inch blade, I was surprised at just how much the SCHF36 could get done. 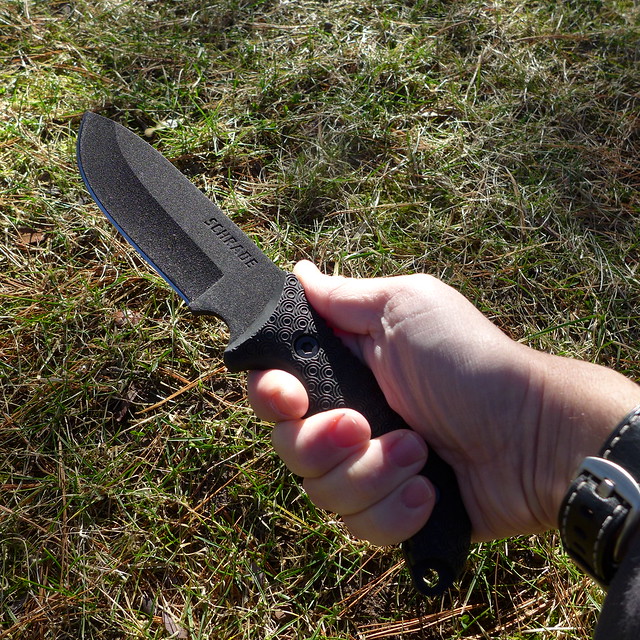 Part of this has to do with the choil and the handle. Both are very good. It’s clear that this knife is aimed squarely at the Kabar Becker line–same materials, similar design philosophy–and in that role, it did very well. I prefer the Becker handle to this one, but I prefer the Becker handle to every other handle out there, so that is not damning criticism. I do like the choil (I always like choils as they give you options). Taken together, this is a very good package design-wise. 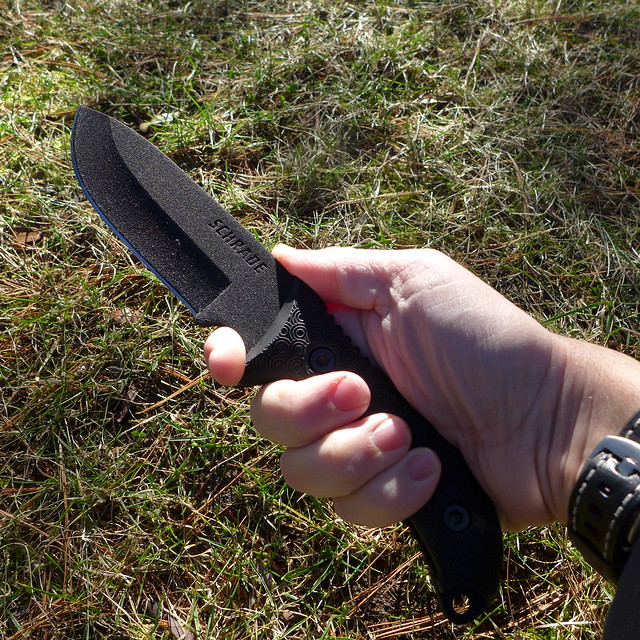 So the TPE handle is actually quite nice–grippy and solid. I also liked the sheath. This is probably one of the best implementations of the “cheap nylon” sheath I have seen–better substantially than the ones that come with the Kabar Beckers. 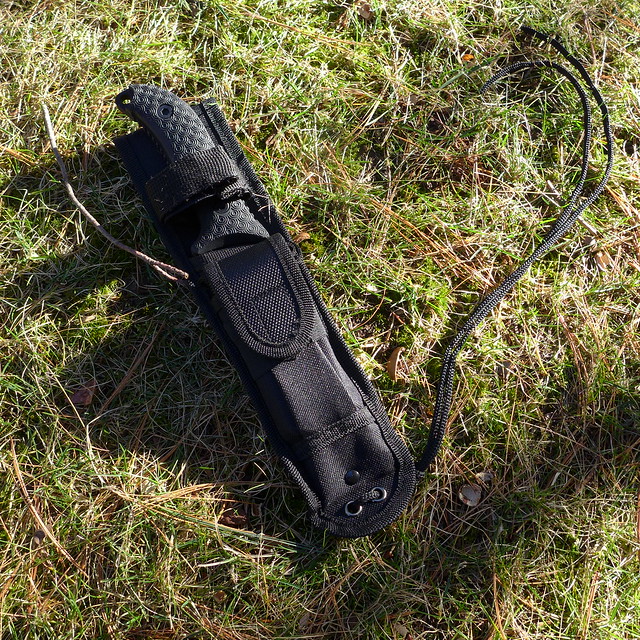 I did not, however, appreciate the powder coat. It was very thick and very coarse, to the point that it added an enormous amount of texture to cuts. There was real and noticeable resistance. I also don’t think the blade needs to be as thick as it is.  For me, the ideal thickness on these kinds of blades is the one chosen by Ethan Becker–3/16 of an inch.

The kit that comes with the SCHF36 is composed of thoughtfully chosen items, though I would pay a few bucks more for higher quality versions of these tools.

The SCHF36 is a very good tool at the price. I think, price blind, I’d still prefer the Kabar Becker knives, but the real world isn’t price blind. In that case, I would have a hard time saying this knife is substantially WORSE than the Kabar Beckers, especially when you consider it costs about 1/3 to 1/2 the price.

This knife and the others in its line show that Schrade is serious. It’s nice to have another competitor in this market segment, especially one that comes in so much cheaper than its competitors. If you are looking for an outdoor knife you can beat up this summer, go buy the SCHF36. It will be the most fun you can have as a knife knut for $35 or so.