Just two years ago, this category was basically devoid of products. There was nothing in the high end except custom gear. But as the knife market has expanded, as the gear market on the whole has expanded, this price range has become positively stuffed to the gills. With half a grand to drop on a knife and a flashlight each, you can get really good stuff, stuff that, frankly, is as good or better than most custom stuff.

Sure there are those top 10% makers that still make stuff better than any production company could afford to do, but we have reached the point with computer-aided machinery that it’s now an economic question and not a capacity question. There are few unicorns out there that you still can’t get for $500, like a Rockstead or the uber price 3D printed Lionsteel, but by in large, you can get anything you want and you can dip your toe into the custom market if you want.

Should you dip your toe in the custom maker, especially with “only” $500? I’d say no, with three big caveats. Generally the makers that selling stuff for around $500 are not the top tier makers. You also won’t find to many knives for $500 that have exotic materials or really great fit and finish. The average $500 custom folder is probably not on par, fit- and finish-wise, with something as mundane as the Spyderco Delica. And comparing a “budget” custom with the fit and finish on a Chris Reeve knife is hardly fair at all. But it does make sense to look.

At a show you can pick up a piece and handle it. You can inspect the fit and finish and feel how it works in your hand. A lot of the perils of buying a “budget” custom disappear. Plus, makers usually sell stuff at shows cheaper than they do online and much cheaper than the secondary market. Sometimes you stumble upon a TuffThumbs before they become big and you can get stuff cheap. I have seen some really great makers sell their first or second gen products for $500 and I kick myself for not getting in on the ground floor, so to speak.

Finally, there are pockets of custom makers everywhere in the world, and if you can find something from a maker living in a country with the exchange rate in our favor, you can often pick up stuff very cheap. I got a Gareth Bull Shamwari for around $500, and it was in part because the Rand to Dollar conversion favored me so much. 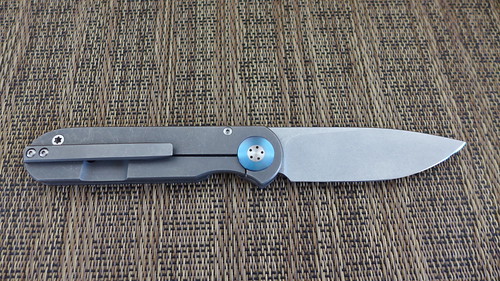 When you are buying a knife that is half a grand, it pays to watch the currency markets. Sometimes it is like getting a 25% discount, which, on a $500 knife, is sizable. 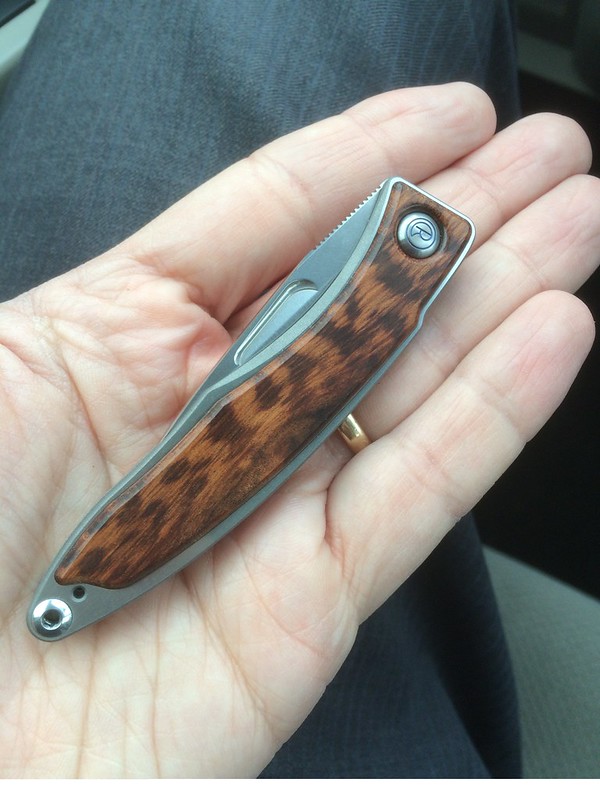 Yes, I like the old nail nick better. Yes, this is a small knife. But you will not find something as stylish, capable, or well-made anywhere for under $500. It has the look and feel of a custom, but, and stop me if you have heard this before about Chris Reeve knives, the availability of a production. In the month or two that have had one since returning it to my stable of blades, I have been delighted with it. Drop it into my breast pocket and before you know it, I have cut up grape, opened a package, and excised a coupon from the newspaper (if you are buying gear in this price range, coupons really help). In my mind this is just a better knife than the Sebenza.

In many ways, the Sebenza was a prototype for the Mnandi, getting all of the tolerances down, figuring out the framelock, and solidifying the blade shape. The Mnandi’s inlays are, universally, beautiful (The snakewood is being discontinued BTW. Get it while you can, it’s spectacular.), and the clip is the best clip design I have ever seen. And with a bit of focus you can consistently open the knife with one hand, even with the stupid revised nail nick.

It’s not really all that close here. But let’s suppose you find the Mnandi too small, which I think is the only truly fair criticism of an otherwise stunning piece. In that case I would suggest that you look at the Triple Aught Design Dauntless, which is designed by TAD Gear and produced by Millit Knives (yep, figured that out after three years of sleuthing). Over three generations they have honed the design to polished perfection, and that is starting from a really nice base. With hidden screws on the pocket clip, contoured handles, and a host of other not-seen-on-many-production-knives features, the Dauntless rocks. I haven’t had a chance to look at the Steelcraft knives from Todd Begg and Reate, but they are a bit blingy for me. I am sure they are nice, but they are more Vegas than I like. 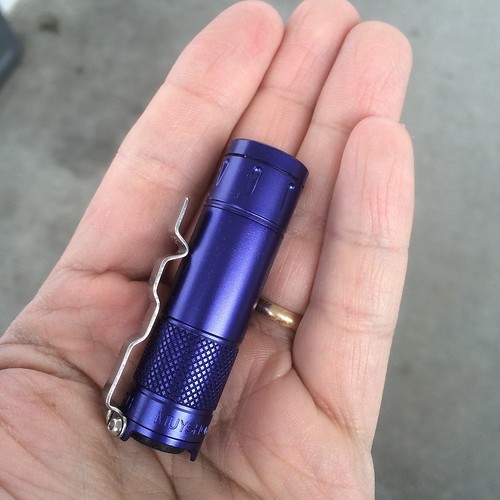 Well, if you have under $500 to spend on a light you can get any production light out there, but don’t bother. It comes down to two custom lights for me–the McGizmo Haiku and the Aeon Mk. 3. In the end, both are superb torches, but the Aeon’s size advantage carries the day for me. This is one of the best lights ever made. It is small, bright, and (like all Muyshondt products) runs forever and is built like a bombshelter.

Can your EDC light survive a trip into near-space and still work? Can its predecessor saw through other lights when hooked up to a lathe? This is a super easy call for me because the McGizmo, while still having the best beam pattern in the world 5 years after its release, is big for a single cell light and this is all about carrying something everyday.

The competition is pretty bear, but there are two lights worth mentioning. First is the stellar and still state of the art MBI HF-R. I also like the Torch Labs Moddoolar Pocket. Unfortunately, neither are in regular production. It’s worth web stalking their product pages, though, because if a few leak out here and there, they are truly awesome photon cannons.