When you take a classic form and change it, there are bound to be complainers. And when Chris Reeve changed the Mnandi, altering the nail nick, I was one of those complainers. But the look of the knife so enticed me that I got over the nail nick and bought one.

After a few months of pretty regular carry, I can say that the knife is still a classic, still one of the best designed and finest made production knives on the planet. And, in the end, the change wasn’t all that big a deal. In fact, one of the other two major changes, improving the design of the pocket clip, is probably more than enough to make up for the smoothed out nail nick. 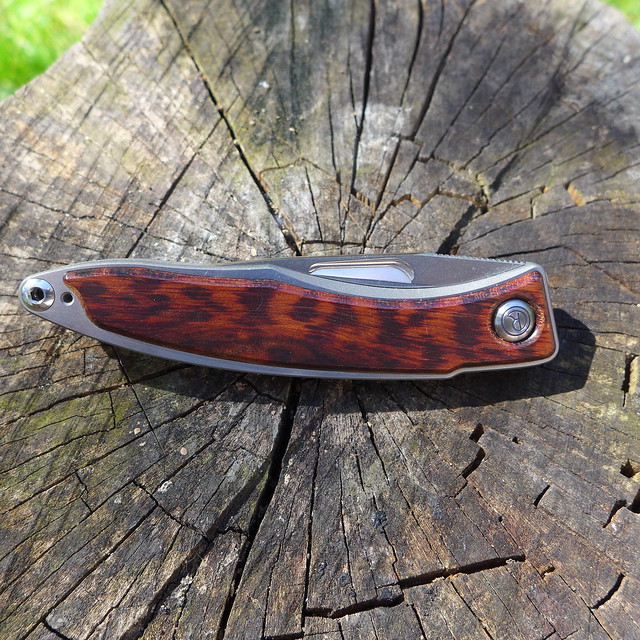 The Chris Reeve Mnandi (here is my review of the old nail nick version) is a high end production knife. It is probably most often used as a gentleman’s knife or as a compact EDC knife.

The blade is a clip point blade of S35VN. The blade is thin and hollow ground to an extremely sharp cutting edge.

The handles are titanium with large, natural material inlays. In the case of the review sample here, they are snakewood inlays. Snakewood, on a board foot basis, is one of the most expensive woods in the world, with very small amounts available commercially. There have been a number of different inlays over the years, but not all are currently available. The other inlays currently in production include bocote, box elder burl, and ebony wood. Special editions also run mammoth ivory.

The knife uses a framelock, also known as the Reeve Integral Lock. The clip is a sculpted titanium pocket clip, now with hidden hardware: 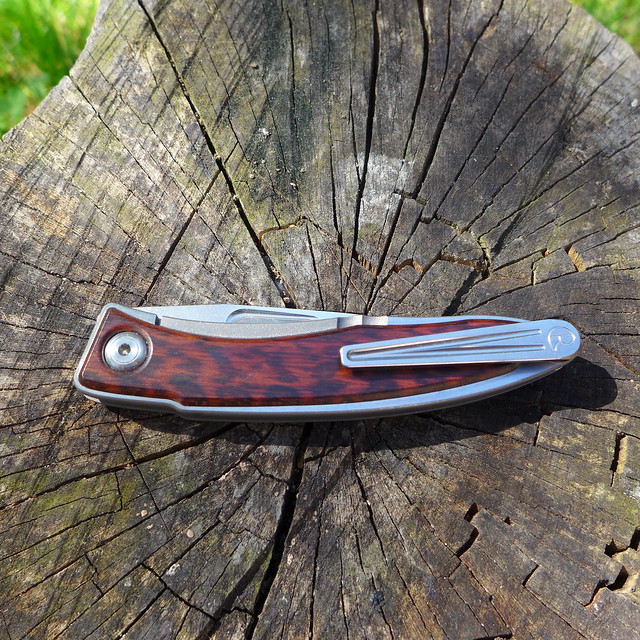 There is a fine run of jimping along the spine of the knife. The spine, like other Reeve blades, is crowned (or rounded over).

I bought the Mnandi on the podcast in Episode 67. Dan of Blade Reviews and I recorded that episode in early April. I got the knife in May, and since then it has unquestionably been in my pocket more than any other knife.

But it is more than it being just the most carried knife. It has been so good that it is carried more than 50% of the time. In that time I have done everything with the Mnandi you’d do with an EDC knife–break down boxes, open packages, cut up food, and the like. It is too small of a knife to do any real outdoor chores beyond whittling (but it does make a good whittling knife). This is not the most rigorous testing I have ever done, but it is probably the most realistic. I don’t baby the knife. It’s been used to spread peanut butter and dig dirt out of my fingernails, but I don’t smash on it either. Aside from the size, it would be a sin to batter a knife this beautiful, akin to playing pool with a Faberge egg.

In my opinion, this is easily the finest of Reeve’s knives. It is vastly superior to the Sebenza, an entire generation ahead of its more famous brother, something like the Leatherman Wave compared to the PST. The design of the inlay, held in place with 3M’s industrial two-sided tape, is nothing short of amazing. There are no inlays that are this big and this nice on a knife under $1,000. Sure some art knives have better implemented inlays with nicer materials, but you can’t sniff one of those for under $2,000 or $3,000.

The size is also perfect for EDC. With an impeccably ground thin slice of S35VN and a length of 2.75 inches, you can cut an apple (a stretch for some small blades) but you will rarely draw a raised eyebrow around non-knife folks. Finally, for all of the bad thoughts I had about the nail nick, it turns out you can easily open the knife one handed still. Here is a sequence of images showing my technique:

Step 1: Use thumb and middle finger to pinch the nick and lift the blade out of the handle: 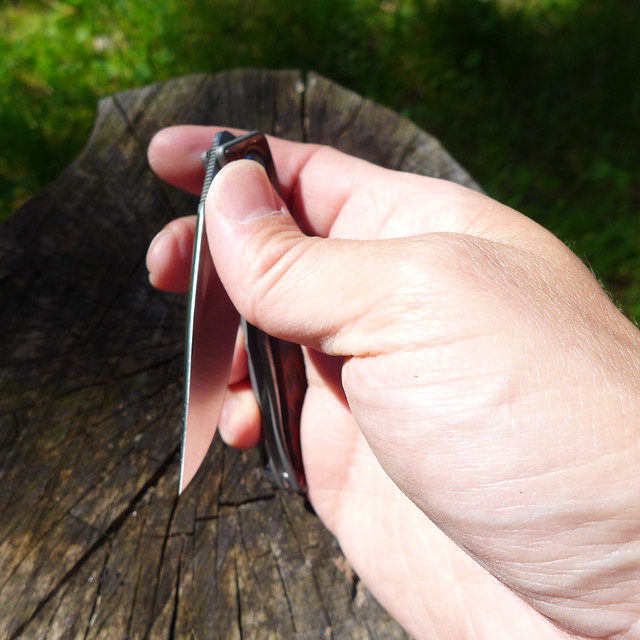 Step 2: Jam your thumb into the deepest part of the nick’s grind, catching your thumb fat pad or thumb nail corner: 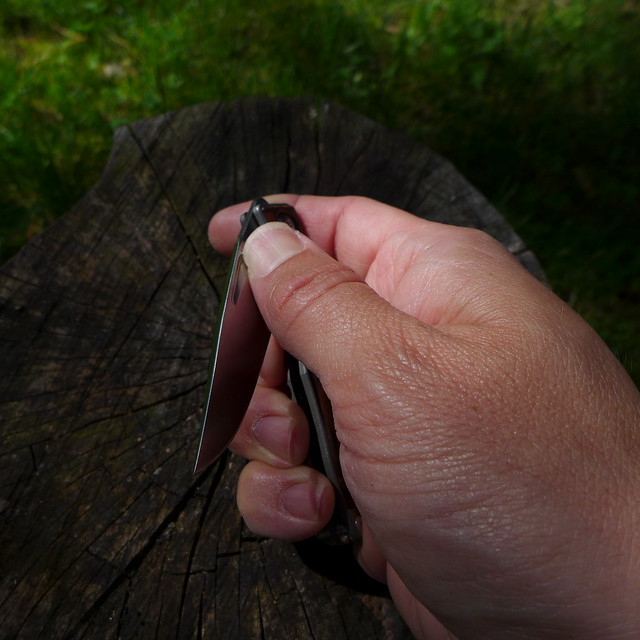 Step 3: Swing the blade up: 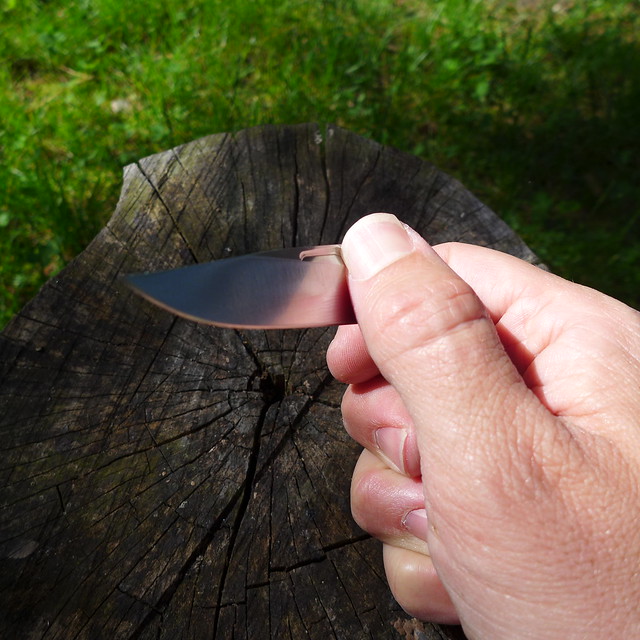 Step 4: Pop it into the locked position:

It is unquestionably more finger yoga than was required before, but it is not impossible or even that challenging after you master the feel of it. After a week, you won’t hesitate to open the knife with one hand. This is why, in the end, I could care less about the nail nick.

It is a Chris Reeve knife. It is perfect. Really, I can’t think of a single place where the Mnandi’s fit and finish are even a bit less than ideal. How good is it?  Well, even the grain of the inlay is set the right way for the blade, giving the knife a kinetic look as if it is almost in motion. The pocket clip here is out of this world amazing. The Sebenza’s clip is great, but like with everything with the Mnandi, it is Sebenza but better, and that says a lot. If all sculpted clips were this good, I’d love them on every knife. Not only is the spring tension good, but it is also a gorgeous piece of eye candy. 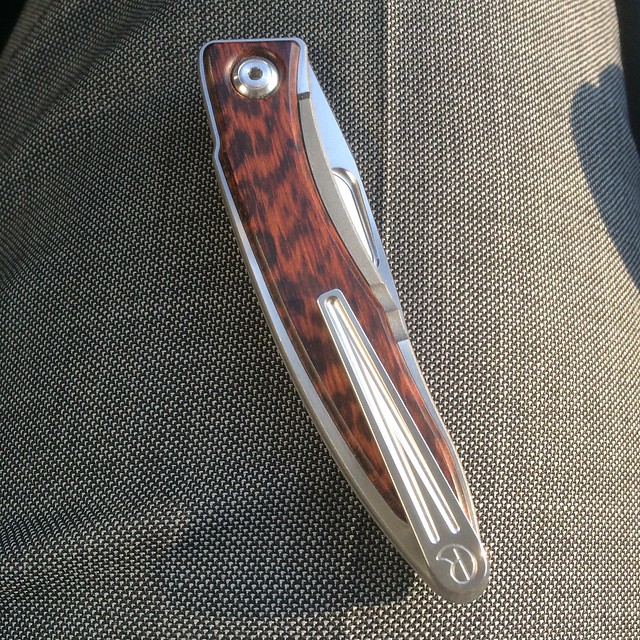 And, hell, even the nail nick, though not like the original, is beautifully done. Throw in some perfect jimping, a crowned spine, a lock that slips into place with nary a wiggle or a sound, and you have an outstanding, outstanding knife.

I love this knife. This is one of my three favorite production folders of all time, along with the Dragonfly II in ZDP-189 and the Triple Aught Design Dauntless (I am slowly completing that list). I can’t say literally a single thing bad about the knife, and if you want to carry a knife is an office environment, nothing works better than the Mnandi. This could very well be the best production knife out there regardless of cost. I have a shootout in the works for even more expensive production knives, but I am not sure any would kick the Mnandi out of my stable of EDC folders.