He taught you how to spit, how to whittle, how to change a tire, and why you should always hold the door open for a lady. He was the guy that pushed you off from a running start on your bike and he was there when that running start ended in a knee-scrapping crash. He was also there when, despite your best efforts at age 16 and half, you crashed into the back of a snow plow and damaged the front end of your car (which was hand-me-down from him). After all that, Dad deserves better than a gift card to Amazon. Here are 15 awesome outdoor and gear gifts that he will actually use.

Finding a small to medium sized non-technical (interframe) backpack that works on day hikes, is built to last, and doesn’t make you look like Dora the Explorer is very hard to do. In the past few years hipster brands have infected the gear world like syphilis infected Nietzsche. The end result is a wave of “clean” “unisex” backs that are just big enough to hold your hipster mustache wax and nothing else. The PFII, on the other hand, has organization, MOLLE, a good strap system, a decently padded and shape back, and is built as if it were one of those sleeves used in training police dogs. I have had one for years and it looks and performs as good as it did the day I bought it. 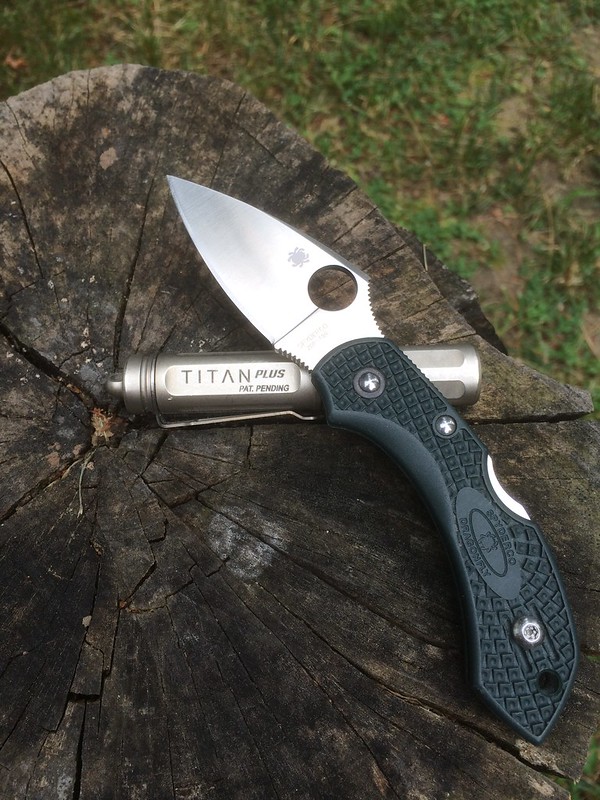 Maybe your Dad had a Case Trapper with its “surgical steel.” It was decent, but he complained to you that he didn’t like sharpening it so much. Well, drop this gem on him on Father’s Day and there is a very good chance it will still be shaving sharp the next time you buy him a present in June. This knife’s size makes it fit in just about anyone’s pocket, even if they are on Dad jeans that sit just over the belly button. One of the very best blades on the market and it is well under $100. 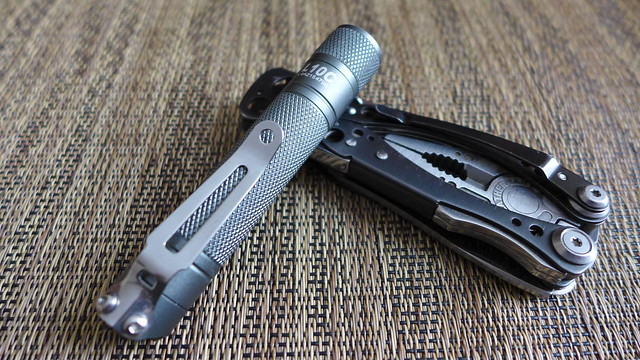 Some of the multitools out there are roughly the size, weight and shape of an anvil. That’s ideal if you want to do on-the-spot blacksmithing, but for the rest of us, the Skeletool has all of the tools you need and none you don’t. The Wave is another option, but it adds a lot of weight and lacks the ergos of the Skeletool. For something that is the size and weight of a folder, you get pliers, drivers, a cap lifter, and a blade. Fix it Dad will love this. It will probably replace that PST you got him 22 years ago. 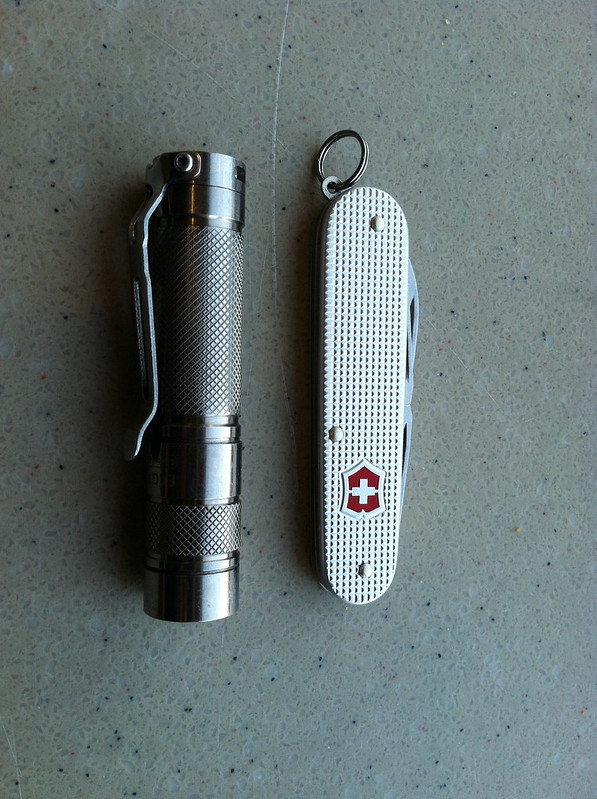 This is a tool that every person on planet Earth could use. Like the Skeletool, the Cadet has all of the tools you need and none you don’t, unless you need pliers. Smaller than a pack of gum and clad in a checkered pattern of Alox, this is a minimalist multitool that looks cool enough to have been designed in Cupertino. I once found them mispriced, to my benefit, and I both six and gave them as gifts for a year. No one was disappointed and when I see them they all say the same thing–“That knife really comes in handy.”

SHOP NOW
Remember the time Dad took you camping and you lit the bacon grease on fire? He regressed down and you did something so dangerous only an adult male could do. You were both, for a split second, the same age and reveled in the pure fiery delight. That destructive impulse would be well served by this cheap, built-like-a-tank fixed blade. The 1095 holds up well and is easy to sharpen. And if your Dad doesn’t identify with Tim Taylor, this is a great backyard blade for those stubborn bushes that need to be hacked back into shape. 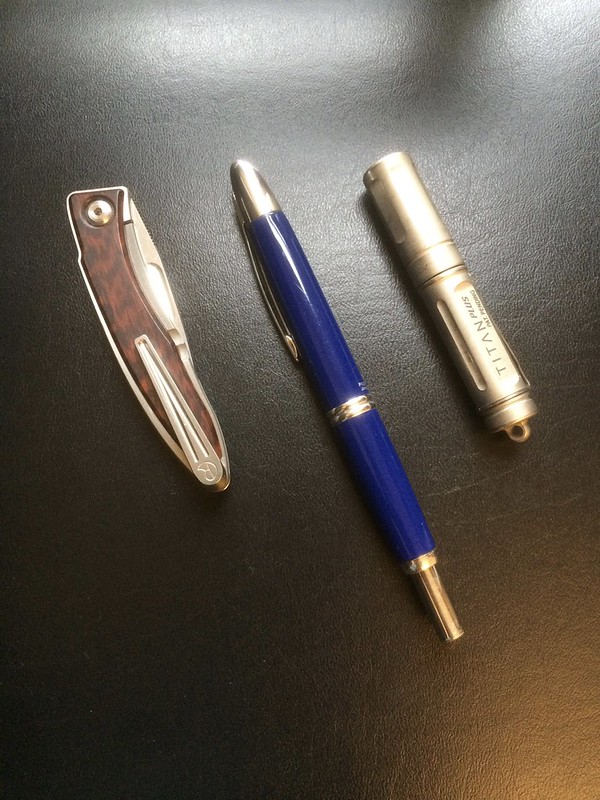 I have handled a wide variety of knives from $4 Wal-Mart “Knife” to a Ron Lake Interframe. For the money, you will not find a nicer, classier, or more refined knife than the Chris Reeve Mnandi. One friend of mine went to Blade Show with his Dad and they got a matching pair of Mnandis. This is a knife that just screams, “Dad, you’re The Man!” It’s pricey, but even someone that knows nothing about knives will instantly realize that this is a damn fine tool. Personally, I like the clean look of the plain S35VN blade, but if you really want to bling out the old man’s pocket they made Damascus bladed versions as well. 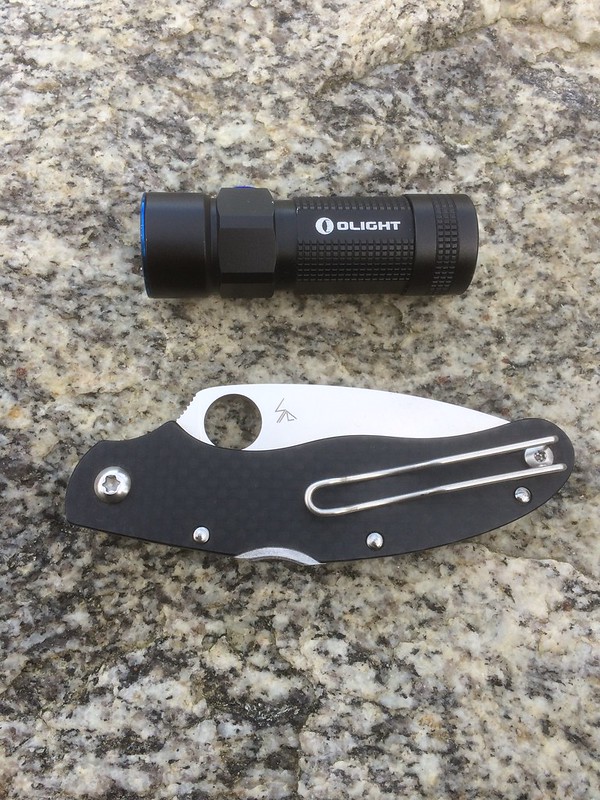 Your Dad isn’t going to fuss with weirdo batteries. He just isn’t. You can talk to him about the vastly superior nature of CR123a batteries with their increased storage capacity and higher “bandwidth,” it will all go in one ear and out the other because, goddam it you can’t by these batteries at the gas station.  So what can you do? Get Dad the S1R, a light that runs on weirdo batteries but is rechargeable so he doesn’t need to buy them. The fact that it is the size of your thumb and hits 550 lumens also makes the S1R a great choice. And if your Dad is so inclined, the charger can power any of the other S-series light and even the angled headed H1R that can switch into a headlamp configuration. 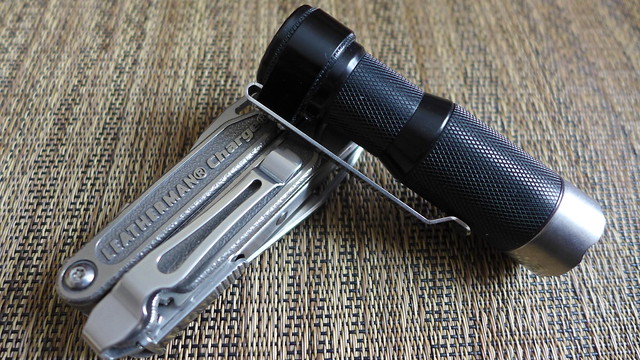 Okay, so maybe you can persuade him to go with a light that runs on weirdo cells. If you can, this is the light that will help you win the argument. Dads love tough stuff. It’s manly and helps them protect their family. There is no light, absent one on Challenger Deep, that is tougher than the HDS Rotary. With a body tube thicker than a bulldozer blade (nearly) and full potted electronics, this light, along with cockroaches, will survive the nuclear holocaust that all Dads, in the back of their mind, think just might happen, or at least they think about it enough to justify purchases of a wide variety of otherwise not used stuff. 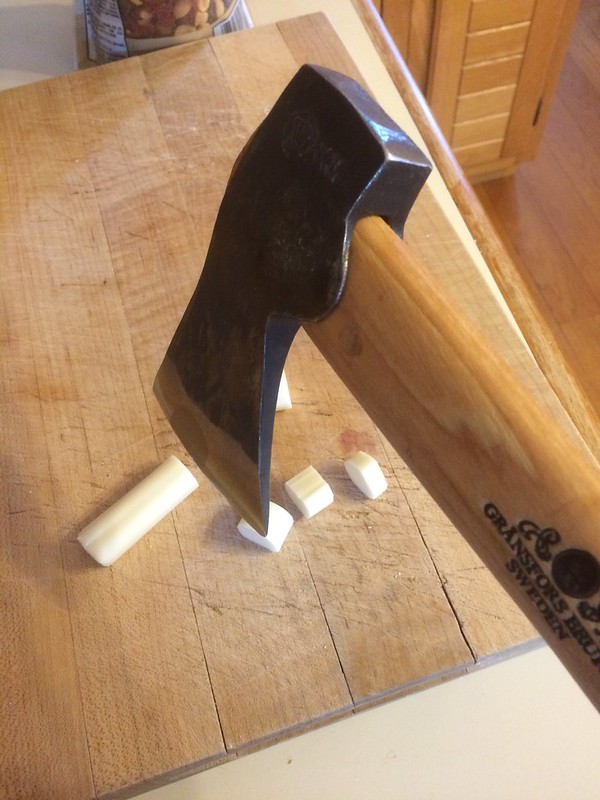 SHOP NOW
GB stuff is a tribute song to craftsmanship. The expertly contoured handles and the perfectly finished heads make all of their products feel amazing. But the Small Forest Axe’s size makes it just about the most useful wood splitter you can find. Forget the fibercomp handled garbage at the local Big Box. For around four times the price you get something that will last a lifetime. Who knows, some day it might be yours. Oh and please tell me you got that “Dad joke” level pun in the picture above.

Do not tell him how much it costs. He will die if he learned you paid $90 for a sweathshirt hoodie. Also don’t show him the catalog or website, which is chocked full of pictures of models that look like angry people that are constipated and just coming out of a trendy gym in downtown Manhattan. Instead put the hoodie on him and let him wear it. Next year he will thank you. Two years from now he will remark with a bit of surprise in his voice that “this is a damn good hoodie.” Three years from now, tell him how it cost $90, but is actually saving you money because you haven’t had to buy three $35 hoodies in the meantime. This a beefy, substantial jacket that is eminently comfortable and at home in the city or out beyond the edge of town. 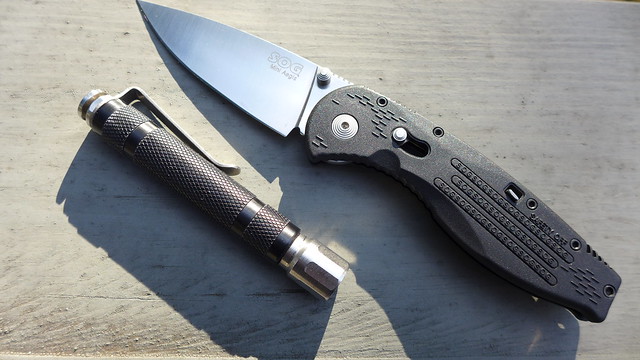 There are a slew of midsized knives out there under $100. Lots of them are touted all over the Internet. Unfortunately, for most folks that is the only place you will find them. If you are looking for a blade you can buy local, this is probably the best around. The Mini Aegis runs AUS-8 steel, a perfect beginner’s steel, a quick but simple assist, and an intuitive lock. The deep carry clip is great, but the real treat here is the weight. For a three inch blade, this knife weighs hardly anything all. If you have a local chain sporting goods store, Wal-Mart, or one of the two Big Box Home Supply stores, you will probably find a Mini Aegis on the shelves. 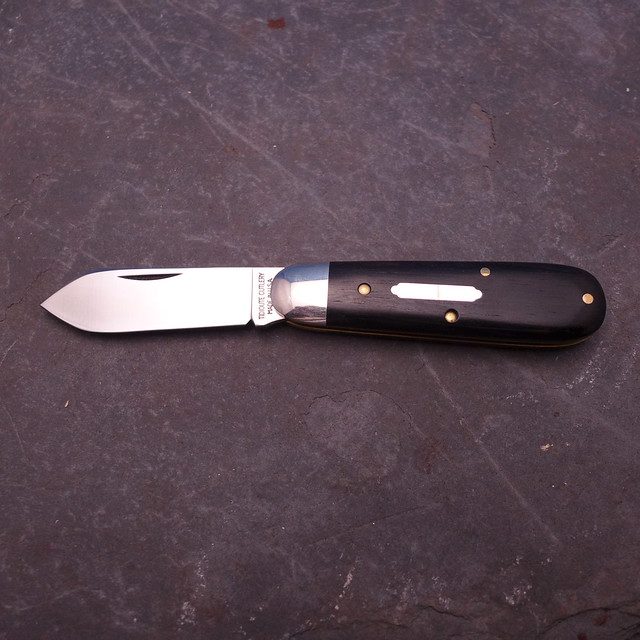 If your Dad is a bit older, remembers unfondly being child during the depression, and voted for Kennedy as a young father, then the GEC Small Jack 25 will put a smile on his face. This is a knife that could have been made in his youth. Even the steel, 1095, was available. But it is made today by a company that cultivates the heritage of the knife business, remaking old patterns and selling them in tubes that wouldn’t be out of place in a Woolworth’s in the 1940s. The Small Jack is just the right size to be a true pocket knife–no clip or giant blade here, just 2.25 inches of thin ground slicing goodness. 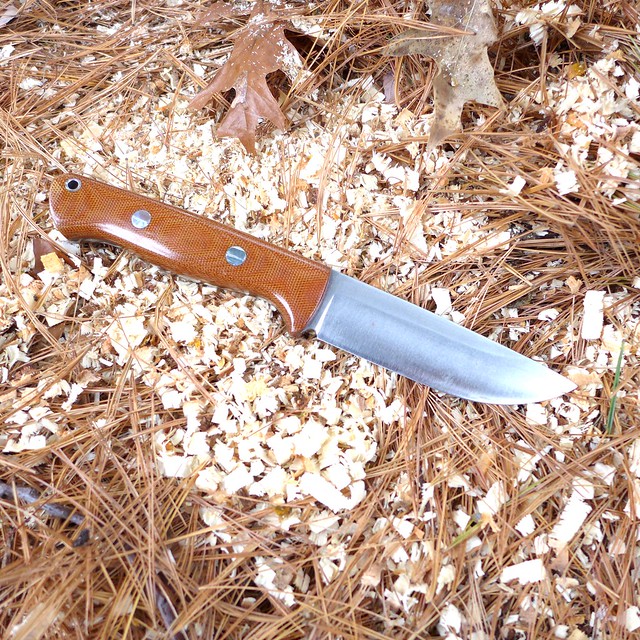 Speaking of thin ground–the LT variant of the Bravo 1 is a gem. Taking the beefy stock of the Bravo and slimming it down is great. Adding in the toughness of 3V is superb. You get the cutting performance of a more slender blade with the toughness of the original thick stock knife. Your Dad will be blown away but the level of polish here. The handle scales, the expertly ground convex blade, and the absolutely perfect handle ergos make the Bravo 1 LT in 3V the very best version of a truly superior fixed blade. Unfortunately, the sheath stinks. 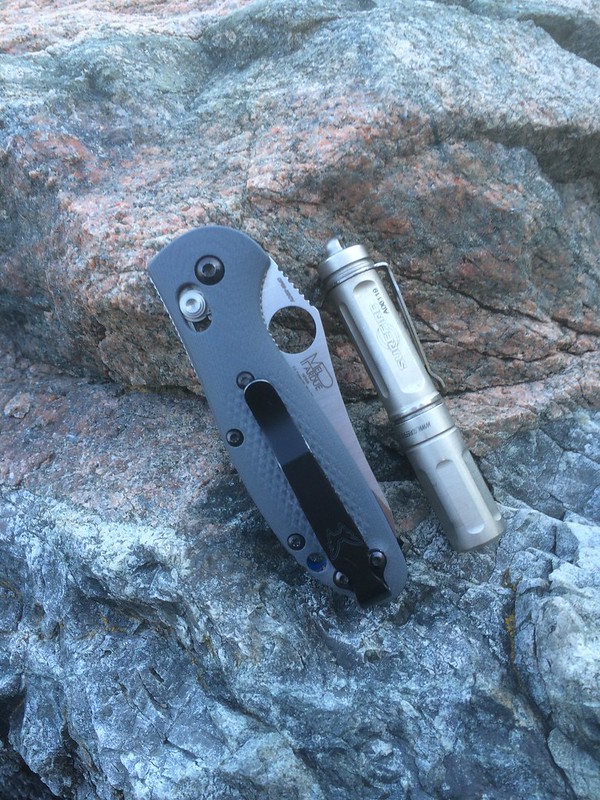 SHOP NOW
Don’t get your Dad a lame coin-cell keychain light. They often get stuck in the on position, they are only slightly brighter than a match, and the batteries cost more than the light. Get him this torch if he absolutely has to carry a light with his keys. Unlike the other lights on this light, this one takes a normal cell–one AAA battery. It comes with a rechargeable one that allows it to max out at 300 lumens, but it is a respectable 100 lumens with an alkaline inside. 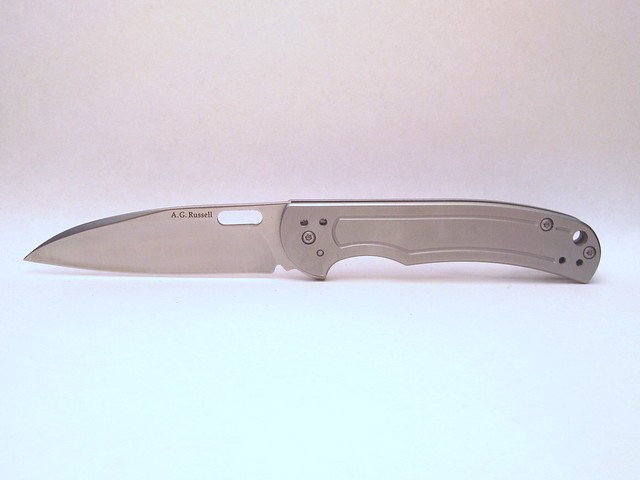 You can’t buy your Dad a fidget spinner. He’d kill you. But if your Pop has active fingers or is a bit ADHD, the Small Skorpion is a great knife. It runs 8Cr13MoV (don’t tell him it is made in China, you will have to endure another rant…) and has skeletonized steel handles.  But it is the elegant AG Russell blade shape and superb flipping action that make this knife just a joy to own and use. It’s thoroughly modern, lightyears from a jig boned handle cover knife, but it is also a great performer. The thin size also means it lives in your pocket quite well. Dad will like it. And who knows, you just might catch him flipping it open and closed as he is driving around town.

Get Pops something good. He earned it. After all, he gave you your first sip of beer. That is totally worth something, right?