Do Urban Guns Pose a Threat to Rural Preppers? Taking from modern and historical examples, when there is a disaster and people flee the cities, they are like locusts and consume everything in their path. When people evacuate for a hurricane, small communities are cleaned out of fuel, food, bottled water, lodging–just about everything.


With this in mind, there is a train of thought in the survivalist community that when there is a full collapse, starving hordes will leave the cities and begin taking whatever they want, even by force. This is reflected by a comment posted on my video about three key items to long term survival,

You won’t last 1 month before some starving idiot guns you down and moves into your house.

I am going to guess he was referring to city dwellers, because people living in rural areas have resources.

Near my location we have:

All across the United states we have rural communities who could be “somewhat” self-sufficient after a full collapse of society.

With examples of people fleeing cities during a natural disaster and historical references such as the Black Death of 1348-1350, rural dwellers know that the real problem is an influx of people from the cities who have no real survival skills.

So, how much of a threat do city dwellers with guns pose to rural preppers?

Thankfully there is some good mews. 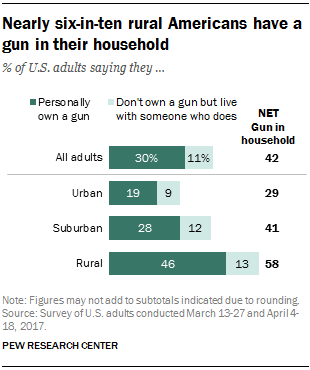 Only 19% of urban dwellers say they own a firearm, while that is 48% of rural dwellers. To me, that pretty much dispels the myth of roving bands of armed city dwellers fleeing to the country side.

However, I do wish Pew research had broken the numbers down to per capita rather than percentage.  Adjusted for population differences, how many guns are there per thousand people in rural versus urban areas? Numbers based on per capita would have given a clearer picture of what the numbers actually are.

Even without more-precise numbers, it would be safe to say urban gun owners would be greatly outgunned by the rural population.