5 of the Best Real-World Knife Tests If you want to see people utterly abuse knives, search for “knife” and “test” on YouTube. You will find hours of footage of people spine-whacking the bejeezus out of knives. You’ll see people baton with Opinels. You’ll find someone trying to pound a blade through a concrete block. In short, you will see a lot of abuse and very little testing that relates to real-world knife use. This sort of “testing” is as informative for knives as driving a car off a cliff is for seat belts. Over the years of testing many, many knives I have come up with some quick and easy ways to check design, fit, and finish. If you are standing at a knife counter, some of these tests might save you from buying a lemon–or, conversely, finding a gem. 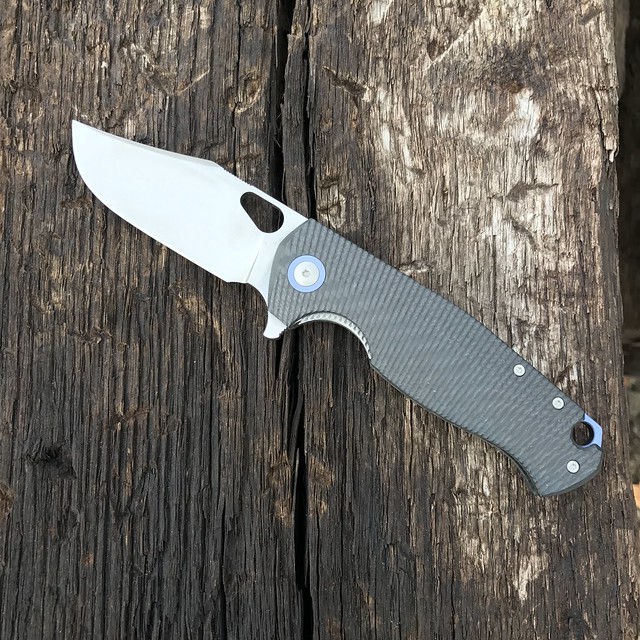 This is a test of the lock and detent.

This is a test of the detent on a knife (the mechanical feature that holds the blade in the closed position). This test is actually a legal one; the knife equivalent of the Field Sobriety Test, developed by the New York City Police Department to ferret out “gravity knives.” In reality, when done with enough force, almost every folder, especially heavy bladed flippers like the GMT seen above, fails this test (hence NYC’s reputation as the least knife-friendly city in the USA).

To perform the Wrist Flick test, hold your knife tip up with the blade facing away from your hand.  With your fingers pinching the uppermost part of the handle, snap your wrist and arm like your throwing a curveball. Almost every knife I have ever owned, with factory tightness on the pivot, fails this test if done vigorously enough. Only exceptionally light blades and/or knives with locks that contact the rear tang, like lockbacks will pass the Wrist Flick test. Virtually all modern titanium framelock flippers will fail this test, as will most Axis lock knives and Tri-Ad lock knives. Some knives are close and I imagine an NYC officer trained at the academy (as they all are) could snap open any folder with a lock. 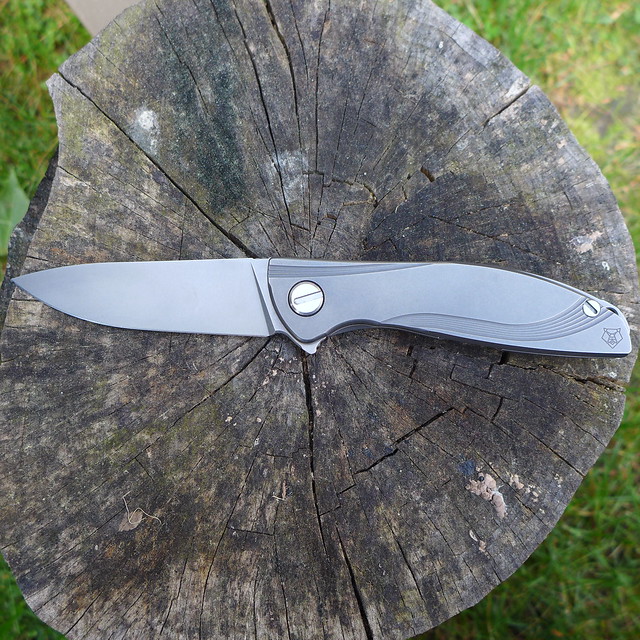 This is a test of the flipper, pivot, and detent.

This one is pretty tough to do, requiring a good deal of dexterity. This is a good test of the flipping action of a knife. Ideally, a knife would be rock-solid closed until the detent is overcome and then the blade would fly open. But getting that just-right amount of tension takes a lot of patience and skill. The Pinky Flipper Test allows you to see just how dialed-in a given flipper really is. Many flippers will fire easily with the index finger, which is substantially stronger than the pinky, but are a real challenge to open other ways. If a knife can pass the Pinky Flipper test, it’s got a good detent.

If it can pass both the “Wrist Flick” Test AND the Pinky Flipper test, well, then you have something amazing and damn near perfect. In my many years of handling and evaluating knives I have never had a knife pass both of these tests. It might just be physically impossible. But if it did, well, that knife was made by a true craftsman.

The Next Level Blade Play Test 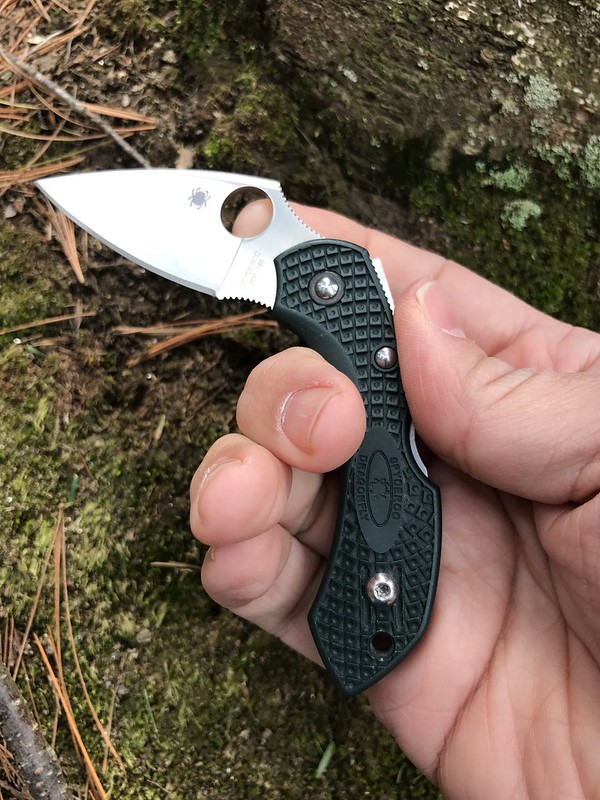 This is a test of the pivot and build quality.

Lots of knives have no blade play when locked. Many, many fewer knives have zero blade play when halfway opened. To check this, open a folder but do not lock it open or engage the slipjpoint resistance mechanism (or a half-stop if your knife has one). Basically let the blade rest, open, at about a 45 degree angle. Now safely grab the knife and wiggle the blade back and forth. Obviously you can’t test up and down blade play, but you can figure out if the knife’s solid lock-up is due to a precision build or an overly tight lockbar. On many knives, especially cheap ones, the lock just jams the blade open as opposed to being the final piece in the “tight lockup” puzzle. 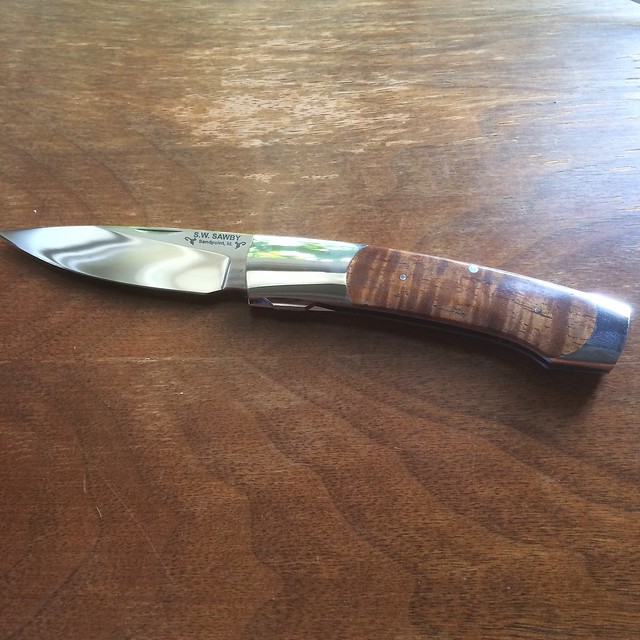 This is a test of build quality.

Many knives have more than one material on the handle. When they do, they should, ideally meet in a seamlessly flush manner. Most don’t.  But often the seams are tight enough that the skin of your finger can’t feel them. But running your fingernail across the material often reveals tiny gaps. The best-made knives have fingernail-flush seams. Interestingly, your finger skin can detect gaps about 1/64 of an inch, while the fingernail test is about twice as fickle, picking up gaps of about 1/128th of an inch. 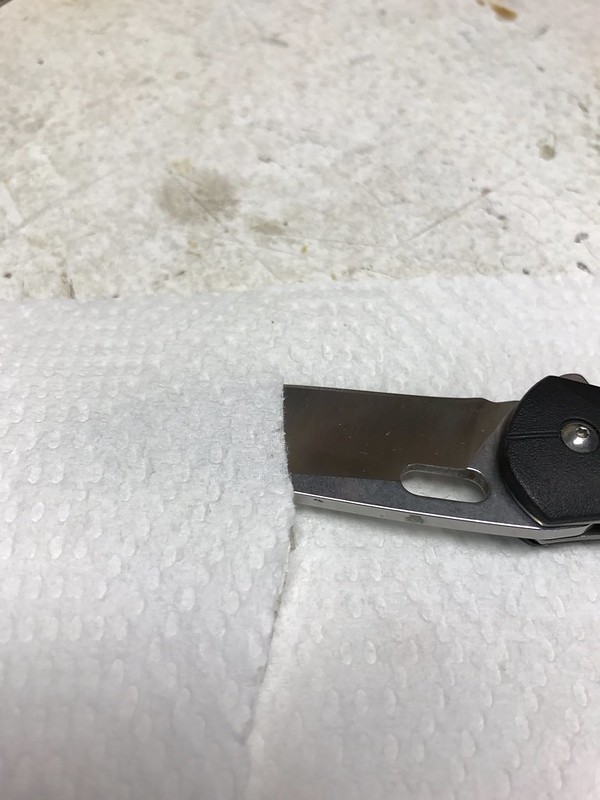 This is a test of sharpness.

In its least stringent form, you should use paper towels. Kleenex and toiler paper are a more difficult challenge. Take a piece of paper towel, poke the blade through it, and pull. If you get a nice, clean cut you have a very sharp knife. Usually the paper towel is hanging and not taut. As the test medium (paper) gets finer and thinner, the tendency to tear and not cut becomes more pronounced. Only my very sharpest knives pass the paper towel test, and only the best of the best can slice Kleenex.

We all know to check lockup, blade play, and centering. Those are just things all studious knife knuts know to do.  But taking things to the next level by looking at the “tests” here can help you find that very best unit in a drawer or knife counter full of seemingly identical blades. Some of these tests are harder than others to pass. Only the best production knives pass the Fingernail Flush test — Al Mar Knives and some of the Taichung Spydercos, for example.  Many nicer knives, especially those with pivots, do well on the Next Level Blade Play Test. Exceedingly few production knives pass either the Wrist Flick Test or the Paper Towel Test. In fact, only the lightest-bladed knives are immune to the Wrist Flick Test, something like the Dragonfly II. It, not coincidentally, also passed the Paper Towel Test right out of the box.