The Rogue Wave of Gear On January 1, 1995 on a remote oil rig in the North Sea near Norway, humanity confirmed the existence of one of the most powerful forces of nature.  Legends had long existed telling of this force, but until January 1, 1995 no one had hard-and-fast evidence proving its existence. This force of nature is a rogue wave.

The wave recorded by equipment on the rig in 1995 is now known as the Draupner Wave. The wave was massive, more than 86 feet tall. Furthermore, unlike a massive surfing wave or a tidal wave, there was no precursor condition that would have warned people the Draupner Wave was coming. The height of the wave was more than 50% higher than other highest waves in the area at the time. Until recently, we had no explanation for the rogue wave.

Humans, of course, have told stories of rogue waves for thousands of years. Until the Draupner Wave, the best evidence we had was a lighthouse that lost its light source from what looked like water and wave damage. The only problem was that the lighthouse’s light source was more than 110 feet above the ocean. Sailors also talked of waves that appeared out of nowhere. Until the advent of double hulled steel ships, waves of this size likely destroyed any ships they encountered and so they remained stuff of legend until 1995. Even now, hard evidence regarding the existence and cause of rogue waves is very limited.

So what does a rogue wave have to do with knives and flashlights? Let me explain.

Scientists now know that rogue waves are formed when a series of small waves combine. Instead of cancelling each other out as usual, rogue wave precursors hit each other and “match up,” creating tremendous walls of water in a comparatively calm sea. In essence, a lot of tiny things add up to make something enormous.

In the gear world this can happen too, and one example sticks out in my mind the most. Like a rogue wave, this little gem of design and tech is exceptionally rare, in fact it is the only one I can think of off the top of my head. I think that the MBI HF-R flashlight is the rogue wave of gear. It is, nearly five years after its debut, still one of the best EDC flashlights in the world. 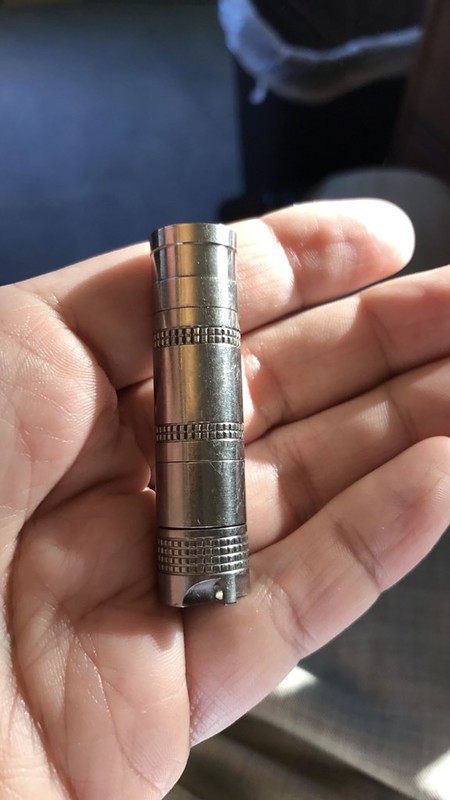 I don’t bother to rank it on lists because it is essentially unavailable–few were made at the time and there are none being made now. In fact, I think there is a very good argument that the MBI HF-R is the best piece of EDC gear as of 2017, period. It is so much better than anything else, that the rogue wave theory is the only real explanation of why it is so good. Here is my argument.

First, on sheer numbers, specs alone, the MBI HF-R still, five years later crushes the competition. It is a light that really does hit 600 lumens and is the size of a AA battery. But max output doesn’t tell the whole story. The low is a perfect single lumen output. So, the MBI HF-R has you covered there. The runtime on high is a paltry 15 minutes, but unlike a lot of the lights out there that have really good numbers for a high, this light stays on longer than the ANSI manipulating turbos most lights use.  I don’t recommend running the light that bright for long, but it can do it.

Second, the game changer here is the UI. Even now nothing is better. The MBI HF-R has a rotating tailcap (that is flat and has precut slots for lume). When the tailcap is at 12 o’clock, the light is off. Low is at 3, medium at 6, and high at 9 o’clock. This means you can go from off to high or to low with a single action. Additionally, you can set the light to off between the other modes as well, so you can get the light to come on in high or medium, direct from off and medium or low, again direct from off. It’s simple, effective, and brilliant. Also, there is no other light out there like this.

Finally there are the options and accessories. This light comes with a modular body tube that allows it to use a 1xAAA battery (of any chemistry). It also comes with space for tritium vials. Finally, and perhaps most interesting, you can dispense entirely with the clock face using included QTC material.  QTC, or quantum tunneling composite is a material that regulates electricity. With more pressure it allows more current into the circuit. With less, it allows less. This gives you very fine adjustment to output, finer than all but the best rotary selector rings. The only light with a better selection system is the uber light the SPY007.

Overall, for a light the size of a bullet, the MBI HF-R packs in so much technology that even years later it is still on the cutting edge of lights. This is all the more remarkable given how fast the flashlight market is proceeding. New emitters and new lumens counts come about at a rate of once a month. Yet thanks to a great, innovative design, and interesting combination of materials and tech, it is truly a rogue wave in the gear world.