Fighting Back Against Feature Creep The Surefire Titan Plus is one of the best EDC lights available. It has been for two years, since its release. Its format, size, and brightness, coupled with the Surefire build quality and beam pattern make it stiff competition for everyone in the flashlight world. But it is a perfect example of what designers call feature creep.

Instead of being satisfied with a darn good light, Surefire felt the need to add on to the Titan–a lanyard attachment AND a quick release lanyard attachment (aka the Flashlight Toupee), a ultra thin and overly complex clip, and a blingy coating. In the end, these things hold the Titan back and are emblematic of some of the design problems in flashlights (and gear in general) right now. I’m going to use the Titan Plus to explore the issue of feature creep in gear and what to do about it.

Every feature is about making a choice. Good design minimizes the impacts of those choices, but they are there nonetheless. Here the decision is clear–attachment to a keychain v. tailstanding.

Surefire prioritizes keychain attachment. I can see that.  The Titan Plus is a small light, ideal for keychain carry, at least in some folks’ mind. But in reality its not. Heavy, design, metal items are brutal on a keychain. They either beat up your keys or get beat up. Years of carrying an Arc Lights AAA-P eventually wore out the lanyard attachment. 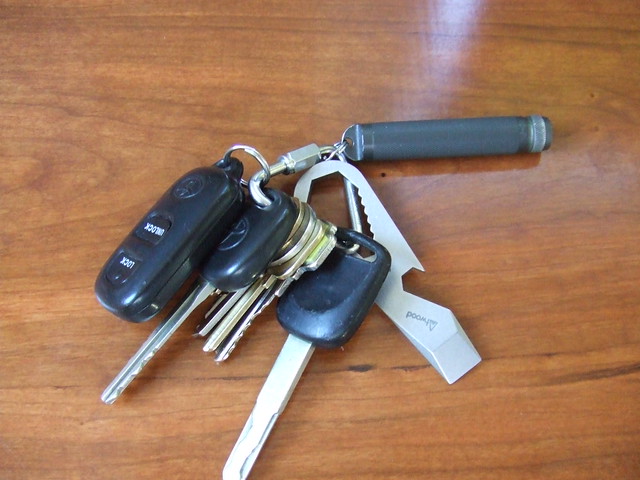 Metal on metal doesn’t work well. Instead, a good keychain light should be tough ABS plastic, not unlike key fobs. The Surefire Sidekick is actually a much better design for this role than the Titan Plus.


The problem is, even if Surefire prioritized attachment to a keychain they weighed it way too heavily because the Titan Plus has not one, but TWO attachment points. The first is built in to the light itself. The second is in the form of a small plastic cap that snaps onto the tail of the light. The solution to this problem is simple–grind off the permanent lanyard attachment point: 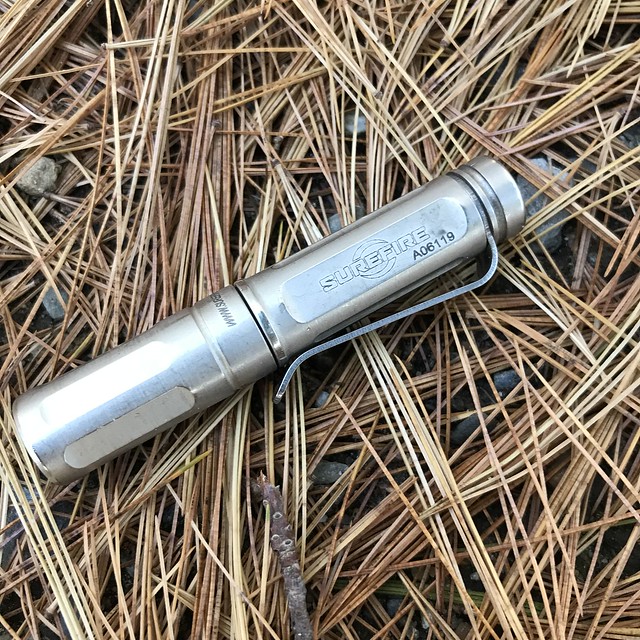 The stock clip from Surefire was okay. It was sturdy, didn’t move, and was a washer-style clip (meaning that it has a washer-like loop at the end and fits between two pieces of the flashlight body, its held in place when the pieces thread together). The problem was that it was very thin and had an overly complex shape. The end result was a clip that snagged and scraped on just about everything.

It’s clear that Surefire wanted to make the clip small and unobstrusive, that they didn’t want to throw off the balance of the light, but it is kind of weird just how bad this clip is compared to something like the genius of the EB1 bidirectional clip. 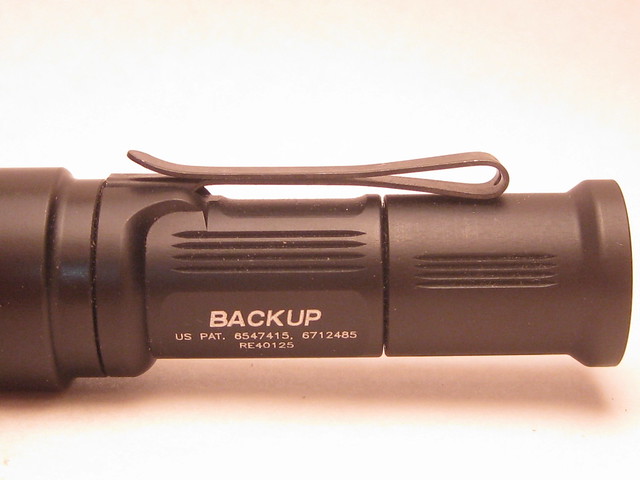 This happens to be one of the best clips on any flashlight, production or custom.  It is wonderful.

But in going so thin Surefire made the clip less than ideal.  I am also not sure what the thinking was behind the overly complex tip and the decision to slip the clip down the middle.  It might add visual interest and cut weight, but it made the clip harsh on everything.

The solution is the aftermarket clip from Prometheus Lights.  Here it is on the light: 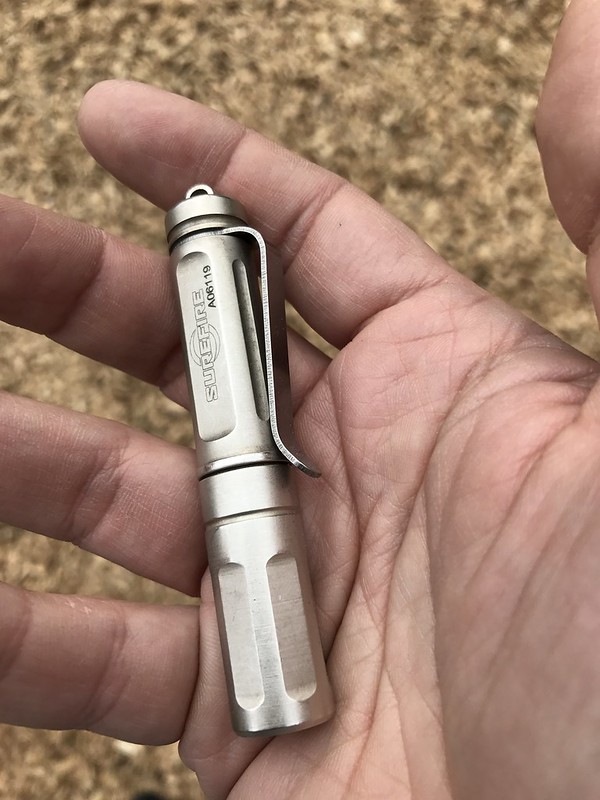 Jason Hui has always had a knack for making great clips and this one is no different.  It is simple, rounded, and thick enough not to feel like a fork tine.  The grace curve on upturned tip is perfect, allowing the light to slide in and out of the pocket with ease, much, much better than the tricky tip on the stock clip.

This one is weird.  I am not sure if Surefire wanted to capitalize on the trend in high end light to use titanium or if they wanted to simply give the brass body something more durable and less likely to tarnish.  Either way, its a bad idea–either a way to pass something off for something it is not OR a way to overcome a poor choice in materials.

I would much rather this light be made of titanium.  They have the ability, I would assume, to machine titanium.  But that is not an easy upgrade to make.  Brass does have some advantages–it is easy to machine and has threads as smooth as greased bearings, but I’d love to get my Titan cerakoted.  It would give the light a more durable coating and, hopefully, make it look less like a fancy tube of lipstick.  Ideally, I’d get a very neutral color or a color that doesn’t appear in nature (like a vibrant blue or orange). 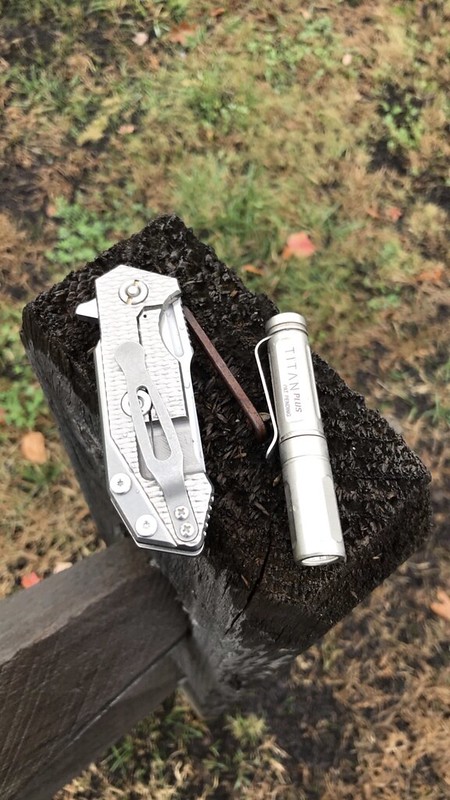 The Titan Plus is a great light with great output and a wonderful form factor.  But Surefire took it a bit far, attempting to give a lux feel without lux materials.  In case you are unaware–brass and titanium are dramatically different materials, even when you paint brass to look like titanium.  It also made some odd design choices, giving people “features” that actually make the light worse than it would be otherwise.  Never forget–simplest is often best.

As a first entry, along with the regular Titan, in the EDC market after a long absence, Surefire did a good job, but with a little more restraint the light would be so much better.  Not only is it a good lesson is gear design, recognizing feature creep and fixing it, is a good way to help search for that perfect light.  In my case I couldn’t find it so I modded the Titan Plus until I had something I liked.

Oh, and there is one other thing–the name.  Titan Plus has got to go.  It sounds like a brand of plus sized clothes.  Titan Pro maybe?  Titan II?  Anything else works.  Like the light itself, I think Surefire ignored some obvious issues with the name.