I have followed Geoff Blauvelt, AKA TuffThumbz, for years. I remember his rambling, hilarious, stream of consciousness videos on knife modding. I can recall fondly when he released his first custom locking folder (the Tanic). And I delight when he releases a new knife on Instagram.

He has grown as the market for custom knives has grown. Like all good custom makers, Geoff has been picked up by production companies. His first collab was the Boker War Toad, a good knife for sure, but not exactly what the market was clamoring for. It has been years since that knife was released. What we wanted, what we were looking for, was a high-end rendition of one of his locking folders. Despite the age of the design, I would be excited to see a high-end production collab version of the Tanic. Even all these years later, it is still an unusual design, iconic for TuffKnives.

But TuffKnives has moved beyond the Tanic. There was the Switch which followed the Tanic, and after that the designs came in a wave of new stuff. There were big, beefy knives, small, compact knives and everything in between. He had designs that incorporated high-end materials and some that involved labor-intensive finishes.

I am huge fan of the Mim-Catalyst, a knife that has the design chops of a good Spyderco with his classic titanium frame lock flipper touches. But of all the knives in Geoff’s stable of designs, one stands out as being especially unique: the Slimfoot. This knife looks more like a flipping Santuko than a traditional folder.

When Arcform, a new production design company, announced the Slimfoot, it, likes its custom brother, was unique in the production world. When it came out that Reate was the OEM, the knife world had every reason to be excited—good designer, new company, amazing manufacturer, all coming together in a knife design different than just about anything out there. 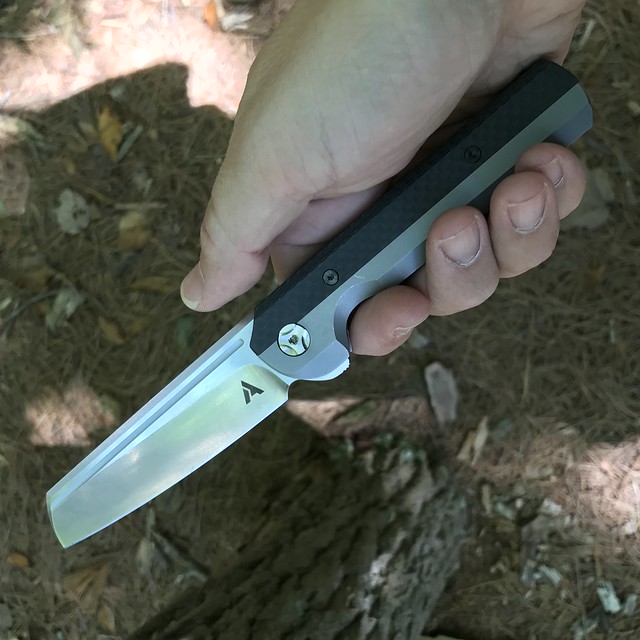 The Slimfoot is a mid-sized overseas-made production knife. It has a 3.3-inch blade with a unique shape. It weighs 4.64 ounces. It is a titanium frame-lock flipper that rides on bearings and deploys via a shapely and textured flipper tap. The knife has a two-toned look with an inlay of carbon fiber over two slabs of chamfered titanium. The knife is retained in the pocket via a sculpted titanium pocket clip. The blade steel is S35VN. The knife retails for $350.

I carried this knife as an EDC folder for a few months, on and off. I did basic EDC tasks with it—processing recycling, food prep, opening packages and envelopes, and light fire-prep tasks. I carried the knife in both jeans and dress pants. On one occasion I carried it in a pack on a hike. I performed light maintenance on the knife (oiling the pivot and stropping the edge). During my testing period, it did not require a full resharpening. 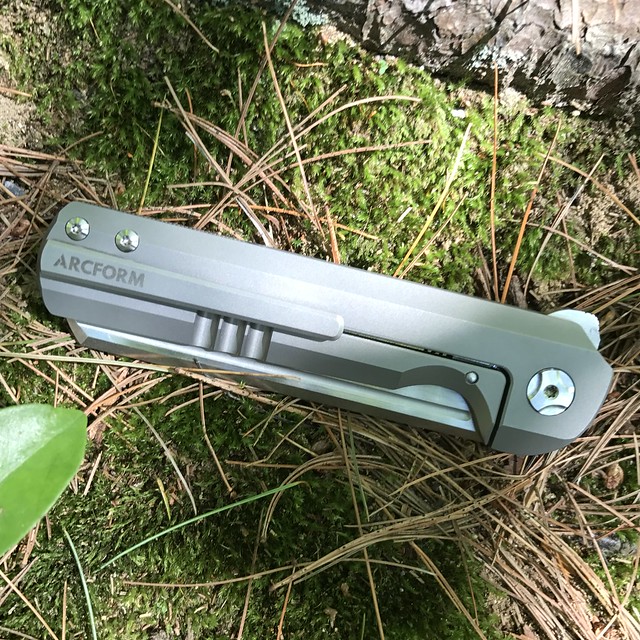 The overall appearance of the knife is unique. From the thick, chunky handles (this is a “Slimfoot” in the same way that a mob enforcer in nicknamed Tiny). To the striking monochromatic color asymmetrically placed around the handle, to that weirdly awesome (or awesomely weird) blade shape, the Slimfoot’s blueprint is quite unique. It’s a good thing too, because aside from appearance this is as “by the numbers” as a knife can get for 2017.

The buzzword/feature list is perfect: 1) titanium handle; 2) frame lock; 3) flipper; 4) bearing pivot; 5) sculpted clip; and 6) powder steel. In some ways those features guarantee a level of competence. At the same time, they make many of the knives on the market today seem blandly similar. The weirdness of the Slimfoot saves it, to a certain degree, from blending in with the crowd.

Reate has had their fit and finish dialed in for a few years now and their work as an OEM includes some truly great stuff—the Todd Begg Steelcraft series, Liong Mah’s in-house designs, and many others. So the fact that the Slimfoot has great implementation is no surprise. The steep hollow grind is clean and even. The flipping action is very good, though the titanium around the pivot seemed to attract dings and scratches. 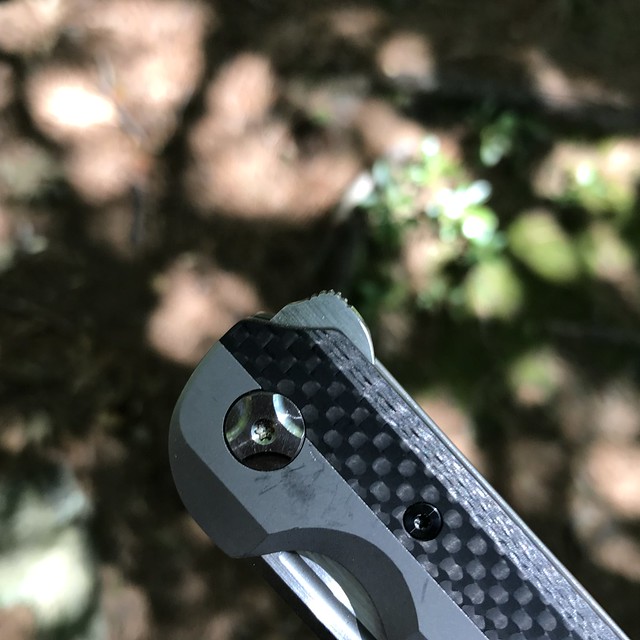 The seam between the carbon fiber and titanium is tight, even though it is not quite fingernail flush. I think this knife would have benefited heavily from hiding some screws (especially those in the carbon fiber) as they greatly distract from the appearance of this knife, but internal and/or blind screws would add a lot to the cost. As usual, the sculpted clip is dreadful. I hate these clips with a nuclear-meltdown level fire. They just don’t work well and they are ridiculously bad hotspots. I cannot wait until this trend passes.

Overall, the Slimfoot is an eye-grabbing design. The continuous-curve blade does great work in food prep and general utility work (hence the santuko comparison above). It’s not the most pocketable knife, coming in just slightly smaller than a TV remote, and carrying a pretty dreadful clip. But in the handle, it’s quite good; the indexing notch is good and the handle’s chamfers slim this porker down a bit.

One particularly meritorious feature is the rounded and jimped flipper. The design really sticks to your finger and the blade flies open with authority. This is not the smoothest flipper I have ever used, but it is definitely above average and the shape of the flipper tab has a lot to do with that.

This is a unique-looking knife, for sure. But in a crowded market there are better blades out there for this price. The Liong Mah Lanny Clip is the same size but looks much nicer and has materials I strongly prefer (micarta just might be the perfect knife handle material).

At $350, the Slimfoot crosses the Sebenza Barrier, but in the end, it is not better than a Sebenza. It’s different, for sure, and that is a good thing, but even with an unusual appearance this is still just another TFF, albeit a perfectly competent one. The more important thing about the Slimfoot is that it could be a portent of things to come. A Mini Catalyst finished to this level with micarta handles would coax me to part with some Benjamins.