The Future of EDC, Part 1 I have been thinking about what our gear will look like in 20 years. If I try to look beyond that, we could be in transporter-from-Star-Trek territory. In fact, go back and watch ST:TNG (skip the dreadful first season) and you’ll notice that our iPads are about 30 times sleeker than their PADDs.

So let’s look at some tech that could change what we carry. Some of it is out now, some is in prototyping, and others are sci-fi dreams. Just to make the article more fun and easy to date, I have made predictions about when this stuff will be widely available and function seamlessly.

There is a very real chance that your smartphone or smartwatch will eat all your keys.  In a world where even a doorknob is Bluetooth-enabled, why carry around a pocketful of clunky metal? There is no good reason, really, and the new Jaguar SUV shows us a solution in the F-Pace Key.  When you buy this pricey British family car you get a silicone-strap, watch-like device. As you approach the car, it opens the doors (as you leave, it locks them). Once you’re in the driver’s seat it puts the car on standby and then if the device is near the start button, one push and your Jag growls to life.

Now imagine every door you encounter with a networked lock. You have this device on your wrist and as you walk out your door, it locks it for you. As you approach your car, it opens it for you. As you sit down inside it starts the car for you. All of the tech for this little upgrade to everyday life is already in existence. I have not seen a multi-lock device, all of them tend to be a single device–either a NEST doorknob or the Jaguar key, but the universal access device is coming.

Bye-bye keys. I have always hated you.

Years Away: 1-2. This is possible now and happening as I write this, but there are two issues here: the wireless format and converting all of the old stuff to wireless-enabled stuff. 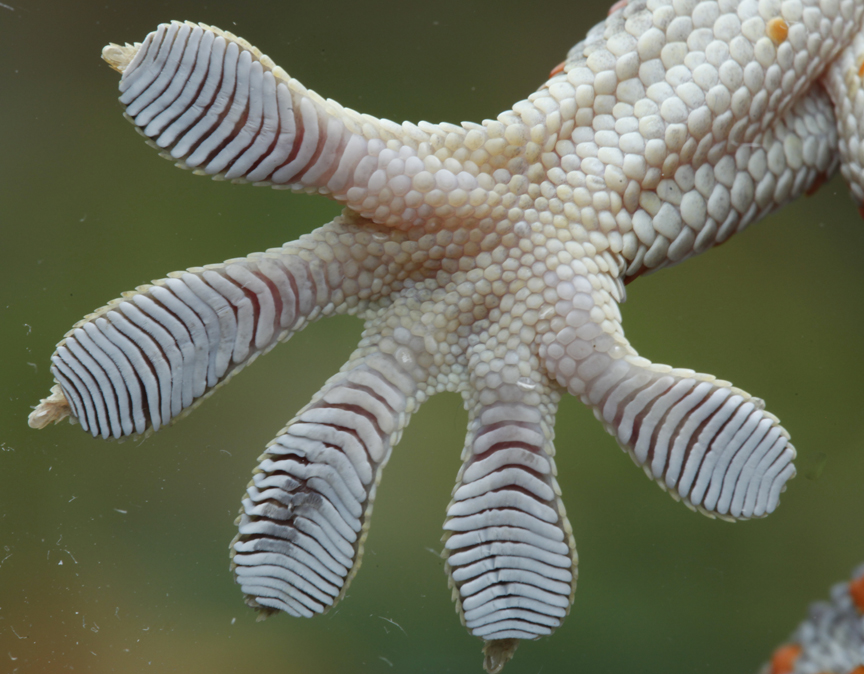 It has taken scientists many, many years to figure out how gecko feet work. These tiny lizards are capable of climbing on almost any surface (we only know of one they can’t cling too–Teflon). Regardless of how wet it is or how steep the incline, they stick to everything. But there isn’t a suction cup on their toes or glue on their feet. Furthermore, the gecko can move and pivot quickly; sticky one second and completely free the next. What makes this possible? Millions of tiny hair-like structures. These hairs are so fine that they are really only visible under a microscope. And these tiny hairs use something called Van der Waal’s force to create a bond with a surface.

The bond is so strong that a gecko’s foot will come off its body before it comes off the surface. Put another way, a few labs are working on Gecko tape and even in its imperfect form the tape holds up to 650 pounds per square inch. And here is the other cool thing–once the gecko shifts its foot, all of the millions of tiny bonds are “turned off,” allowing it to move quickly.

The implications here are simple–imagine a knife lock that uses this principle. With a pair of gecko surfaces inside the handle, once the blade pops into place, it would be held there with an immense amount of force. Designed correctly, you could probably coax two full square inches of surface area out of a handle, allowing for 1300 pounds of resistance, given the current performance of man-made gecko tape. That’s plenty strong. And here is the other thing that makes the gecko lock so promising–the hair-like structures are self-cleaning. Once they are shifted, they unbond with everything, the surface the gecko was walking on AND the dirt and debris that were hanging on to the hairs.

Years Away: 10. This tech exists, but getting it cheap enough and functional enough to work on a $50 knife seems impossible right now. The promise of a blade that never needs sharpening has been dancing around the huckster circuit of the cutlery world for years. Watch an old infomercial from the early 90s and you will hear Chef Tony mention this. In reality, those knives had lots of serrations. They would, eventually, dull.  But material science and biology have discovered true “always sharp” cutting edges.

Urchins need to be able to bore straight into solid rock. The tides of the ocean push and pull, and without a good solid connection, they would float away. And so they have a series of grinding teeth that allow them to chew away rock and attach themselves. These teeth are incredibly sharp and incredibly durable. For years we knew urchins could do this, but we couldn’t figure out how they managed it.

Recently, a team of scientists discovered how this was possible. The teeth of the urchin are actually made of two substances–one very hard material and one less-hard material. As the teeth chomp, the hard material takes the brunt of the impacts. Over time, the hard material chips away–but unlike the steel in our knives, these chips occur at pre-determined spots. Thanks to the less-hard material, the chips always take place at a point where they reveal the next ultra-hard edge. All this takes place on a microscopic scale, so the urchin’s teeth appear to last a long time.

Additionally they are constantly growing new teeth so the cycle occurs indefinitely.

This technology, brought into the knife world, would require a degree of metallurgical skill that, at the current time, is either impossible or far too expensive. If science and engineering bring the cost down, we could have blades that last quite a long time and yet are always sharp. Because our knives can’t grow new steel, they would eventually shrink to a point where they aren’t all that useful, but the urchin teeth show that the rate of material loss is relatively slow as all of this chipping and breaking occurs on a microscopic scale.

Years Away: 20. As with the gecko lock, we have the tech, but scaling it down to fit in a knife that costs a reasonable sum seems far away. I can imagine industrial cutters with this tech much sooner. Imagine a cardboard box cutter machine that costs $30,000 with a cutter head of this that costs $5,000. That seems like it is 5 years away. A $50 knife is a different question.

There are a few more pieces of tech or sources of inspiration out there for updating our favorite EDC gear. Look for more in Part II.