If the effectiveness of a knife blade comes down to grind, heat treat, and then steel, a flashlight’s effectiveness is similarly broken into three parts: optics, lumens, and color rendering. I have written quite a bit about lumens and color rendering. They are very straightforward: high numbers are better. There is, of course, science behind this, but really for the consumer, it’s just about understanding the scale and what higher and lower numbers mean. You want a lot of light? Opt for high lumens. You want accurate colors? Get Hi CRI.

Reflectors are much, much more complicated. There is not just a little bit of science behind reflectors, but a whole wing of physics here (optics). People have been grinding lenses and reflecting light for science purposes for thousands of years. Math, philosophy, and science converge here with both Spinoza and Kant doing a lot of work on optics hundreds of years ago and now, thanks to photography, the field of optics has exploded.

By way of disclaimer, there is simply no possibility that I can get into the physics and math behind high-end optics. Just browsing the math behind stochastic processes for orange peel reflectors made my head explode. Instead, this article is intended as an overview with an eye to what users see and need, rather than a comprehensive explanation of the math and science. For simplicity’s sake I am calling all reflectors and optics “optics.” I understand they are different, but they function similarly.

What do Optics Do in a Flashlight?

Simply put, a flashlight optic gathers and aims light in a flashlight. The process is much more complicated than that on an optics/physics level and there is an exceptional amount of math involved in predicting how light is gathered and aimed out the front of a flashlight. Flashlight optics should ideally accomplish three things: gather photons, push them out cleanly, and focus them.

The first job of a reflector is to pick up as many photons as possible. A cheap reflector (or god forbid–a silver sticker) will fail to get every photon going in the same direction. Good reflectors clean up, getting about 97% of all photons. Nothing can gather 100%, and ANSI standards don’t measure this but better technical reviews on Candlepower Forums do measure this.

After efficiently scooping up photons, optics should push them out in the same directions with as little junk as possible. Some of the lesser reflectors, like those found on a Mini-Mag, have rings and dark spots. The optic inside, a real reflector, doesn’t have a perfectly-smooth reflector, resulting in the splotchy output.

Finally, an optic should focus the photons. Depending on the intended use of the flashlight, the focus could be very wide, (flood) or very tight (spot) for long “throw.” Many flashlights do a bit of balancing to give you some throw and some spread at the same time.

An Overview of a Beam Pattern

The beam, or light field, of a flashlight usually has two major components — the bright spot in the middle, often referred to as a “hotspot,” and the less-bright ring around the hotspot, usually called the “spill.” Some lights, like Surefires, typically have a tight beam with a bright center and very little light in the spill. Some lights’ spills are quite bright. Generally, I prefer a balanced hotspot and spill. For my money, the McGizmo Haiku represents the perfect beam pattern in a flashlight. Here is the beam: 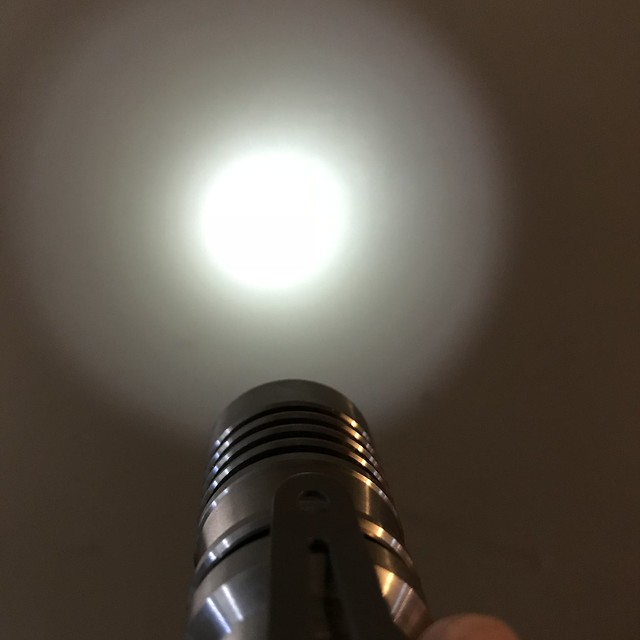 As you can see, there is a large-ish hotspot, compared to the spill (of course the size varies with target distance, but the percentage of the entire light field will remain the same).

The other thing to notice here is not just the hotspot and spill but the actual shape of the light field. On the Haiku, the light field is perfectly round, and the spill is concentric with the hotspot. Generally, a round light field is less-disorienting when scanning things at night (the spill easing you into hostpot’s peak brightness also helps). Finally, it is important to note that the entire light field is without spots, random dark or light portions, and shows no artifacts whatsoever.

If price is no object, the Haiku is really hard to beat. I have had more-advanced lights and more-expensive lights, but to this day nothing beats McGizmo’s amazing reflector on the Haiku as evidenced by this incredible beam. McGizmo uses a classic orange peel reflector to get this amazing, clean beam.

Throw is also an important consideration for optics. The physics are pretty straightforward–the longer you want to throw photons, the larger and deeper the reflector needs to be. I have yet to see a true “long throw” production light with an optic other than a reflector, but clearly it is possible, given how other optic devices work (see, for example, a lighthouse lens).

A Taxonomy of Optics

Flashlight optics come in a wide variety of designs from the dreaded Home Depot Black Friday special with a silver sticker, all the way up to custom optics found in lights like the Haiku or the SPY007.  In between are a huge variety of optics. Here are a few:

Smooth: This is an optics design that has largely fallen out of favor due to the fact that it is very hard to execute a smooth reflector

Orange Peel: A few years ago, all good lights ran an orange peel reflector. They produce smooth beam patterns, but the distinction between the spill and hotspot can be a bit hazy. They are so named because the silver surface of the reflector is mildly stippled, like the peel of an orange.

Mule: This is a light with no reflector at all. The idea here is that you get the emitter and nothing else.  Generally, you only find a mule on a very cheap or very expensive light. The McGizmo Sundrop was the first Hi CRI light and it ran a mule setup, basically to show off its emitter. On the complete opposite end of the spectrum, you have crappy gas station lights that don’t even bother with an emitter.

Aspheric:  This is an optic (or lens) and not a reflector (which is usually made of silvered metal). Here the idea is to alter the beam pattern completely. So zoomie lights (which, as a rule, are terrible) run variable distance aspheric lenses and purport to “focus” light for better throw. I prefer aspheric lenses for work lights as they throw a ton of photons as widely as possible. The Klarus Mi1C has a good aspheric lens. Some lights have both an aspheric lens and reflectors.

TIR: This is the new hotness in production lights. It too is an optic and has generally replaced orange peel reflectors. To a total outsider and non-optics person they seem to be easier to make, but only if you can do so in large batches. Some customs like the BOSS 35 have a three-emitter array with mini-TIRs for each reflector.