Streamlights are not the first choice for flashlight fans. They tend to have awkward outputs, weird UIs, and below par lumens counts. But they are cheap, usually just a smidge more than a Maglight and significantly less than a Surefire. They also tend to have very good reflectors. Finally, they have a build quality that exceeds the price. None of that is particularly eye catching and no one would mistake a Streamlight for a spec beast, but they are reliable and in the world of emergency tools, reliable is a good thing.

Despite not being bleeding edge lots and lots of people like Streamlights. They are quite popular among LEO/EMS/Mil folks precisely because of their reliability. The Streamlight Microstream has long been a very popular EDC light because of its size and durability. But because of their quirkiness, it is hard to justify a Streamlight over something like an oLight or a Zebralight–similar prices but much better performance.

The ProTac 1L-1AA, however, has a trick that makes it worth considering even if you have a stable of high end lights–it can use two different widely available batteries. There have been a few lights that can do this, like the positively dreadful Gerber Omnivore, but the 1L-1AA does multi-battery compatibility right. In addition to having multiple batteries, it also has decent outputs and it is one of only handful of good entries in the 1xAA market. By putting all of these features in a single light the 1L-1AA is worth a look. The fact that it is around $35 only underscores the point.

The Streamlight ProTac 1L-1AA is a single cell, LED flashlight. A rear clicky turns on the light and switches modes. The rear clicky can also be used to program the light (more on that later). The comes with a friction fit pocket clip, which, like all such clips, is terrible. 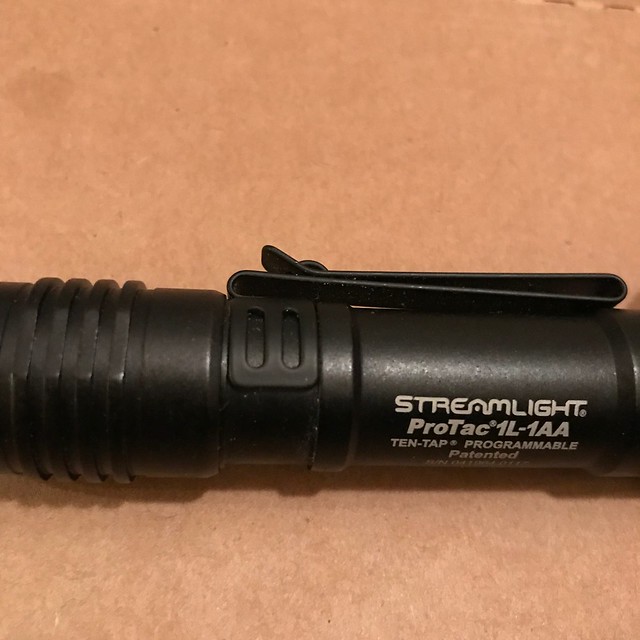 The front end of the light includes a smooth reflector. The big trick to the 1L-1AA is the fact that it can use either a 1xAA or 1xCR123a battery to power the light. This gives the user a tremendous amount of flexibility. You can use the 1L-1AA as a CR123a light get decent output or you can opt for a 1xAA and basically guarantee that no matter where you are you will have batteries.

The light also allows the user to program the UI. Out of the box it comes in a High–>Low–>Strobe set up. After pressing the tailcap ten times you are switched over to programming mode. In addition to the out of the box setting, you can program the light to output in Low–>High or just straight High. My original 1L-1AA would not program no matter what I did, so I sent it back to Streamlight. Within a week I had a new light (a different light) that was easy to program. The 1L-1AA now exists in the Low–>High mode, which I believe to be the superior choice for non-tactical applications.

As a side note–Streamlight’s customer service was very good. Only Benchmade, in my experience, has better customer service (Benchmade’s CS is, so far as I can tell, the best in the gear business, hands down). Not only did I talk to a real person when I was trying to troubleshoot the light, but they were quick in getting me a working light back. Having had trouble with multiple other lights, this was a dream. My experience with Nitecore and Amazon was nowhere near as good (note: it is not good customer service to send me a broken replacement to an already broken light). It is clear to me that being headquartered in the USA made a major difference, both in terms of accessibility to customer service and shipping times.

The 1L-1AA arrived just before an annual midnight hike on what was the coldest day of the year and the coldest day in a decade. The hike was a trudge through the snow when the temperature was below zero. Being a flashlight fan I equipped my entire family with torches and used the 1L-1AA myself. I also used the 1L-1AA for regular “New England winter emergencies” like checking the oil tank levels and illuminating things during a late night mid-storm snow shoveling (which is pretty demoralizing, BTW). I have also used the 1L-1AA as an EDC, taking it work with me in dress pants and carrying it on the weekends in jeans.

The 1L-1AA has two major design drawbacks. First, the light cannot tailstand. It’s very close to being able to do so, but the “bubble” of the switch cover makes it impossible. 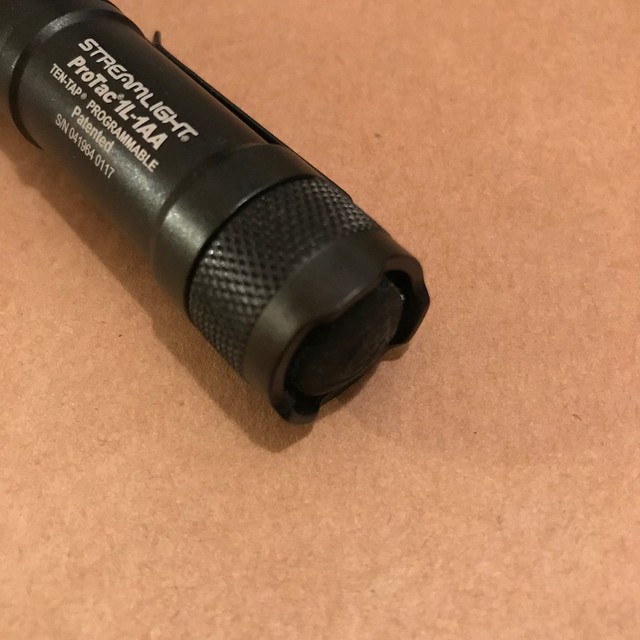 A redesigned tailcap or a less puffy cover would make it possible. The ability to a ceiling bounce (aim the light at a white ceiling for diffuse, room illumination) is a big plus, especially for those times when the power goes out. Second, the pocket clip is awful. A washer style clip, one that goes over the threads of one piece and is sandwiched in place when the other piece is screwed in place, would be a tremendous upgrade–just as easy to remove but much better in use.

Those to drawbacks hold the 1L-1AA back from greatness, but there is still a lot to like here. First, the reflector is truly great. Lumens, as you may know, are perceived logarithmically meaning that twice as many lumens does not appear twice as bright. So the modest 250 lumen output here doesn’t seem all that dim compared to say the 600 lumen oLight S1R. In fact, the vastly superior reflector on the 1L-1AA gives you much better throw despite significantly less horsepower. 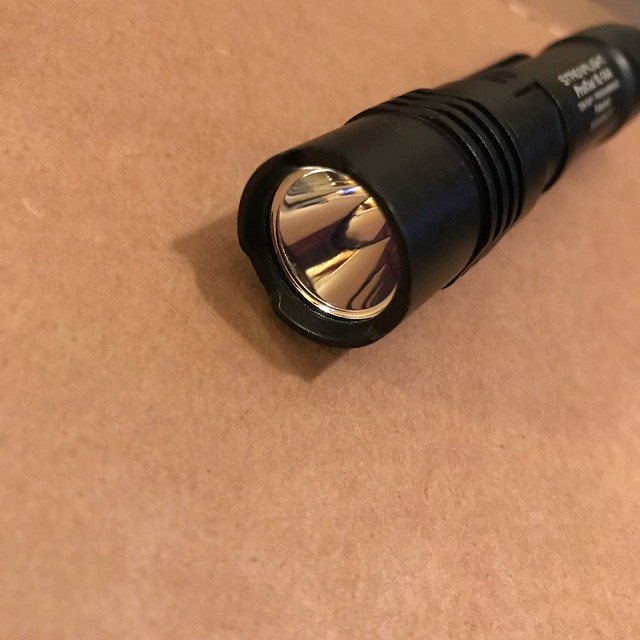 The beam is tight, travels a long way, and has no artifacting. If your a flashlight company trying to hit a modest price point, the reflector is a good place to spend your design pennies. Second, I really like the tailcap assembly. The click is loud and hard to miss. Its easy to use, even with gloves on, and once I got a fixed version, it was easy to program.

There are other things that I do not like, though I understand others may disagree. I’d prefer a three mode output with a moonlight low (around 1 lumen, bright enough to light up things at night, but not so bright that you lose your night vision), a medium around 30-50 lumens (the current output on low) for close work at night and conserving power, and the full high. This set up works better, in my opinion, than any mode available on the 1L-1AA. I’d also like to see micro-USB charging, like Streamlight implemented on their new version of the Microstream. This is the wave of the future, and it would give the 1L-1AA even more power source flexibility.

Overall, I am very impressed with the Streamlight’s build quality. Despite a significant difference in price, the Streamlight is nearly the equal to a Surefire (although the Surefire is much more advanced emitter-wise). Parts thread together nicely, the emitter is perfectly centered in a wonderfully designed reflector, and the switch is responsive. The Streamlight runs Type II anodizing, which is less durable than Type III found on most enthusiast grade lights, but it is is the best Type II anodizing I have used. If the cost is the reason why, I think Streamlight made a good choice here as they did not suffer much, if any, of a performance penalty.

The 1L-1AA has a few limitations, but even when then, the dual-fuel approach makes the light a worthy addition to any household. If it is a choice between this and the Mini Mag, which is about 2/3rds the price, opt for the 1L-1AA. Based on battery versatility alone, its worth it. But the incredible reflector and programmability also makes the Streamlight better. Its not up to snuff features-wise or output-wise with the best production lights, but it is not that far off either. 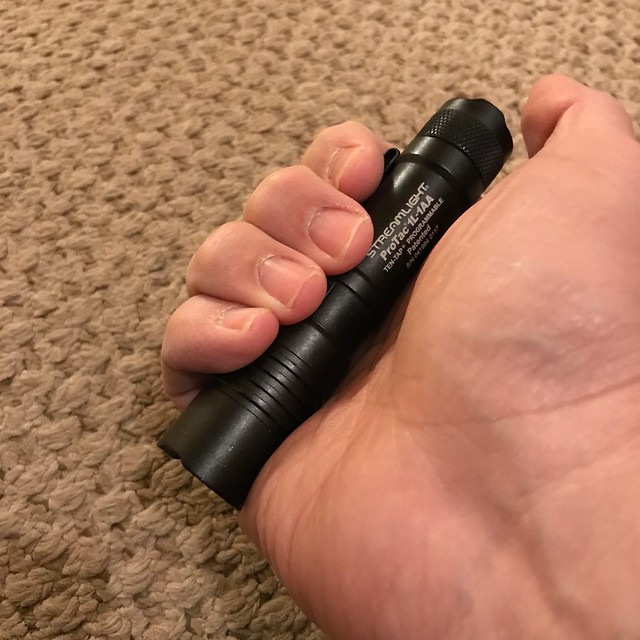 If Streamlight does a refresh on this light like they did with the Microstream, it would instantly become a top choice. The number of great 1xAA lights is very small–a Zebralight, an oLight, one Eagletac, and the hard to find Reylight Lan Ti–and a USA made entry would be great. Overall, even for a true flashaholic, there is enough here to like to make the 1L-1AA a worthwhile purchase. In an emergency it would be a great light, as you can use it or, due to its simple design and low cost, it would make an excellent lender. The customer service and country of origin are cherries on top.