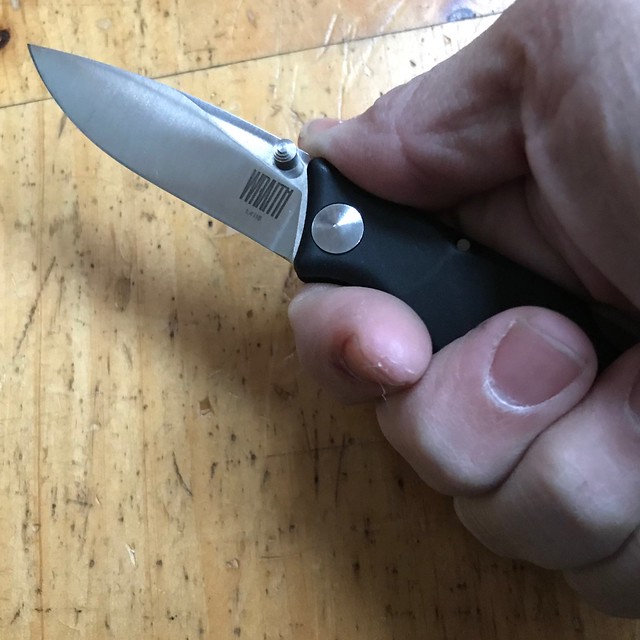 The price of production knives has spiraled ever-higher in the past few years. It used to be that very few knives cost as much as the highly-vaunted Chris Reeve Sebenza. Cross that price, around $330 at the time, was all but unheard of. Now, companies release knives that are two or three times that price with materials that have traditionally been the exclusive purview of custom makers.

Companies like Reate had dropped blades with MokuTi and Damasteel blades, while more well known brands like Spyderco and Benchmade have produced integral designs, folders with handles made of a single piece of metal. The lines between high end production and custom knives has been blurred to a significant degree.

All of this has resulted in superior blades for knife fans, but a true dilemma—how to do spend $600 on a tool? To a large degree these epically high priced knives are really just pocket jewelry and Instagram models. But as the market’s top end has expanded greatly, the bottom of the market has been neglected. In mid 2017 that trend started to reverse direction. LA Police Gear released a sub-$50 folder with a pivot bearing and S35VN steel. Giant Mouse, a company that released strictly limited edition folders, launched their Ace line and showcases a number of cheaper blades. Spyderco jumped on the budget trend with the Efficient and the the Polestar/Alcyone designs.

Ontario’s entry in to the budget blade market is the Wraith. Its just-right size, nice handle, and classic blade shape make it an excellent knife, especially the price. 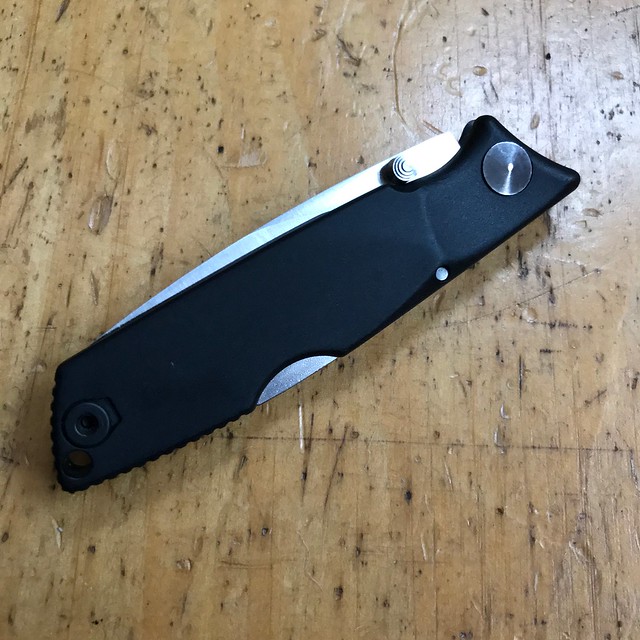 The Ontario Wraith is a small to mid-sized folding knife. It has a molded FRN handle with a pocket clip. It has flat-ground drop point blade made of 1.4116 steel. The blade is 2.615 inches and the knife weighs a paltry 1.65 ounces. The knife locks open with a backlock. The Wraith retails for $19.95. The Wraith is made in Taiwan. Here is the product page.

This is an EDC knife and I used it as such, carrying it off and on for the past six months or so. In that time I used it to break down boxes, open packages, food prep, and outdoor tasks like fire prep. Because of the price I did not baby the Wraith doing things I wouldn’t do with a more expensive knife of this size. It held up quite well without any rolling or chipping of the edge, despite hitting some rock and stone underneath what I was cutting at the time. Tough not hard steel here. 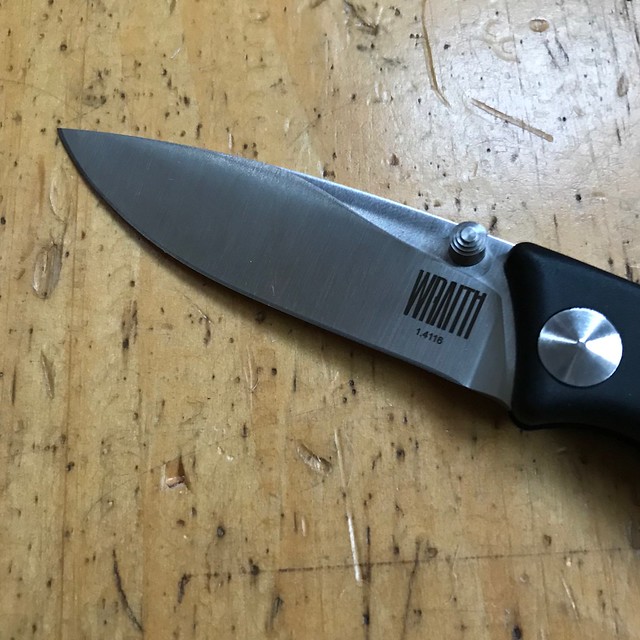 Ontario has entered into a couple of collabs and they have done a lot of work to bolster their folder line up, but the Wraith, so far I as can tell is an entirely in-house design and it is spectacular given its humble materials and price. The handle is a really useful and low impact shape, allowing for a lot of use with very little hotspotting. The blade shape is a classic drop point, allowing for a good amount of slicing and an okay tip for piercing cuts. The clip is effective and stays out of the way. The lockback is solid and, of course, familar. The blade is the right size for EDC, clearly under 3 inches. The weight is good too, under 3 ounces. If you need a budget blade for EDC you file a lot worse out there than the Wraith. 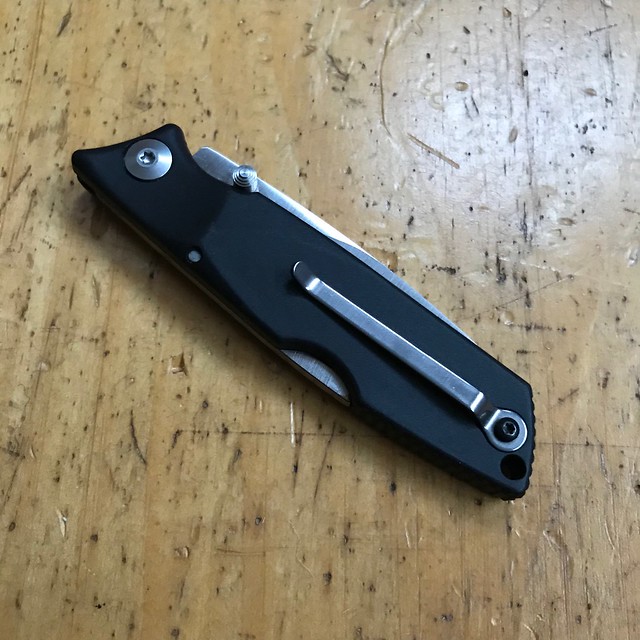 Everything on the Wraith works. Its effective. But it is not inspired. Inspiration, apparently, costs more. The grind is good, even and thin behind the edge. The thumbstuds, of course, work well. The clip’s design is good but the attachment point is a bit faulty, as it allows for movement. I’d prefer a two screw attachment as this and the Mini Dozier from KaBar exhibit the same problem. The gap between the spine and the blade when locked up is positively huge, as gappy as a six year old’s smile.

The steel, Krupp 1.4116, famous for its use by Victorinox, is a very stainless steel with warm butter-like edge retention. For the price, its okay, but we are really seeing steel come down in price. With the Giant Mouse Iona and the LA Police Gear sporting true super steels for under $80, their are better steel values than this. But this knife is designed to appeal to the most number of people and most people don’t care all that much about steel. That said, this exact knife with S35VN would be a real killer. 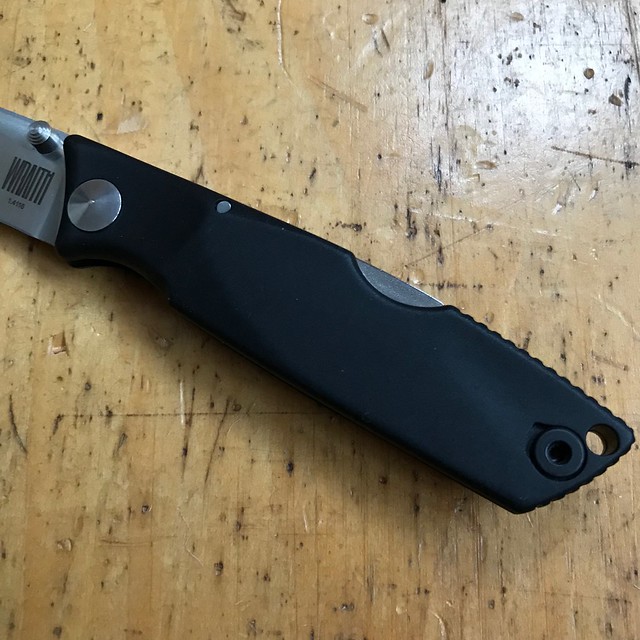 If you walked into a Big Box and walked out with a Wraith you would have found one of the best two or three knives on their shelves. This is an excellent design. The issue is that in a world with places like Blade HQ and GP Knives, you can get anything you want at a bargain price. M390, S35VN, and 20CV used to be so astronomically pricey, but now, these days, they done sell for uber-high prices. The Wraith is an excellent example of the growing gap between acceptable and average.

As the Golden Age of Gear goes into its third or fourth year and steel prices tumble, the “average” steel is probably something like very nice S30V or S35VN. That steel is pretty darn great. The average is WAY, WAY better than acceptable. And the Wraith, while acceptable is far from average. It is effective. It will serve you well. But for just a few bucks more you can get something far, far better.

The interesting thing here is a comparison between this knife and the new 112 Slim from Buck. Both are inexpensive knives, both have lightweight polymer handles, but the 420HC steel is a really big upgrade from this 1.4116 steel. In the end, I think I’d opt for the 112 Slim.

If Ontario dropped some sweet steel in this little knife and fixed the clip it would be a real competitor. If you need a knife to drop in a glove box or get mucky, this is a good choice.