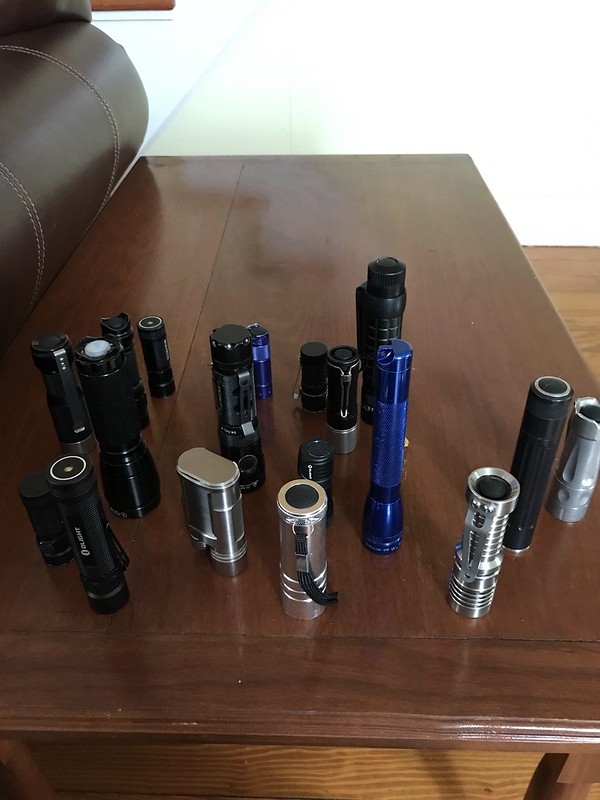 While emitters, tint, and runtimes get all of the press, the way in which a light gathers and throws light photons is probably the single most important attribute of a flashlight. Unfortunately, it is also the hardest attribute to reduce to a single number or measurement that you can put on a box (you know what Tommy Boy thinks of things you can put on a box, and in this instance I agree).

Still, it really matters and I am going to show you why in this article. Part I of this series was an overview of optics and reflectors. This piece will show you how those different kinds of optics impact a flashlight’s output.

Note: I did not mess with my camera settings, so all of the beams appear equally bright although they are not. The BOSS 35, the last light, throws out 1200 lumens. The Inova is lucky to toss out 30. The point of these photos is to show the link between optic type and the beam pattern. I have picked typical patterns for each type. 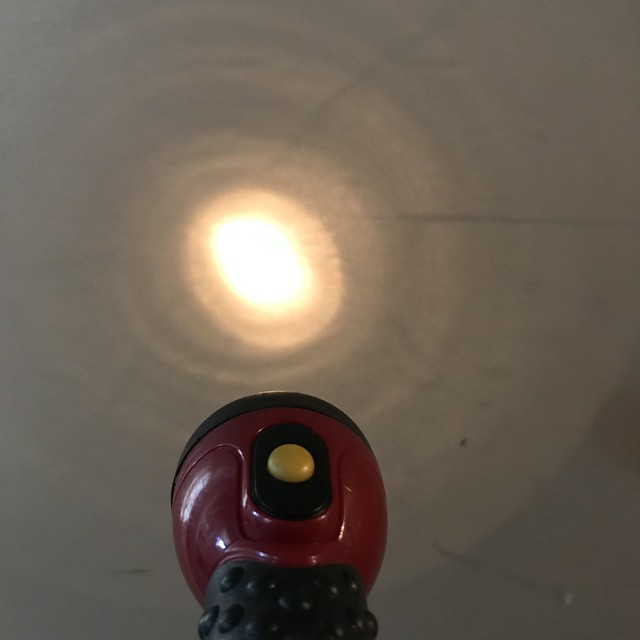 I am not sure exactly what this is supposed to do, but it distorts what you see to such a degree that it is almost certainly not worth carrying a light unless this is all you have and it’s an emergency. For a run out to the trash or a check after a bump in the night, don’t bother. Even if you light it up, you won’t be able to tell what it is.

Here is the wretched piece of crap which makes that beam pattern: 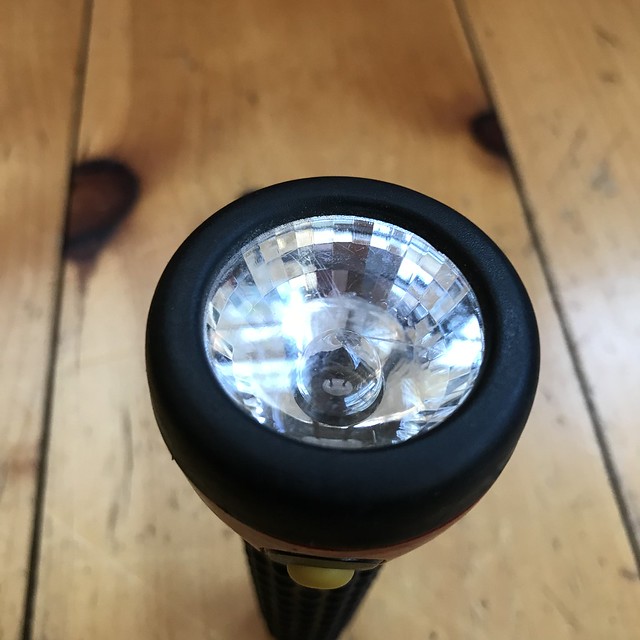 Yep, don’t bother.  And no, I did not buy this light. I found it in our house after the previous owners left. I keep it around solely to be the “look how crappy flashlights used to be” light for reviews and comparisons.

The Gold Standard: the McGizmo Haiku 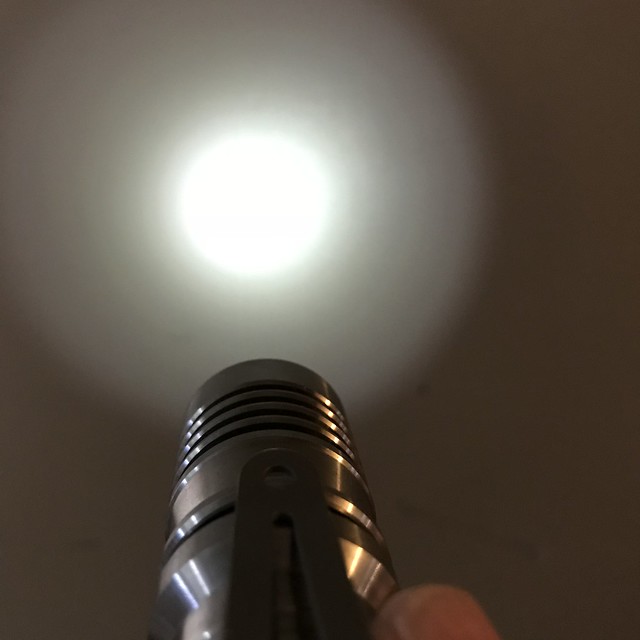 The silky smooth pattern with a nice hotspot and useful spill are the gold standard for torches: clean, round, and useful. The optic here is an orange peel reflector and the best ever designed, in my opinion. Here is the head that puts out this portable slice of light heaven: 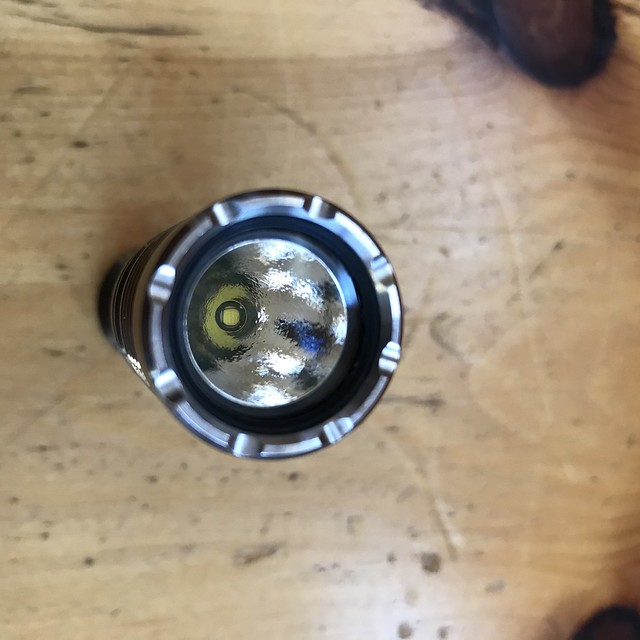 TIRs or Total Internal Reflectors are the new hotness in the production light world. They are pure optics, with no reflector dish of any kind. The beams tend to be a bit too short on throw for me, but they are clean and useful. Just don’t expect to light up a car a half mile away. 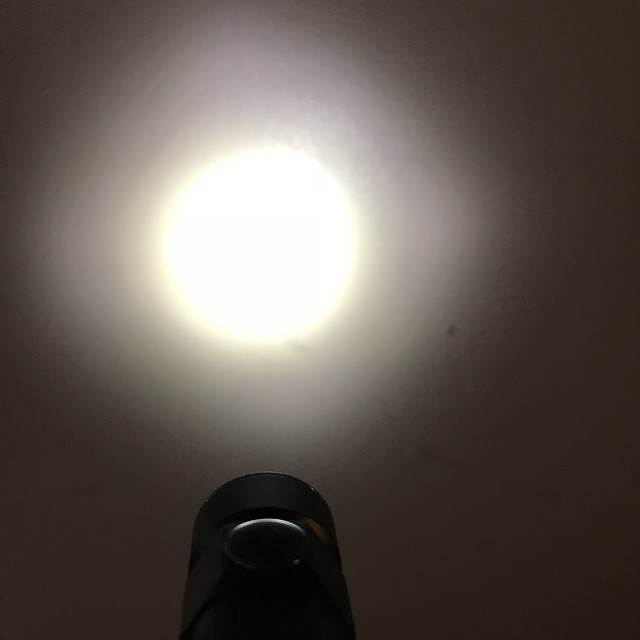 Note the small spill here. The S1R is a great light, but anything more than 50 feet away, even on high, is pretty hard to illuminate usefully. I do like how durable and rugged these lights are. Even a ding to the lens does little to disrupt the beam pattern.

Here is the business end of the S1R: 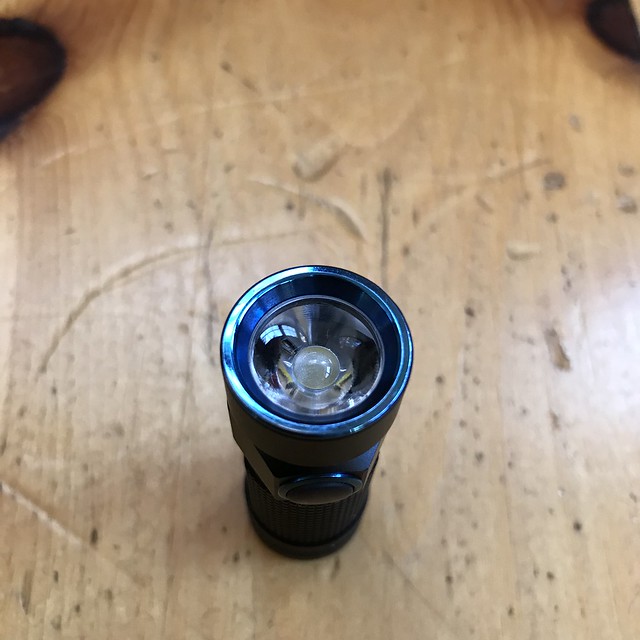 The Black Friday Light with its Sticker Reflector 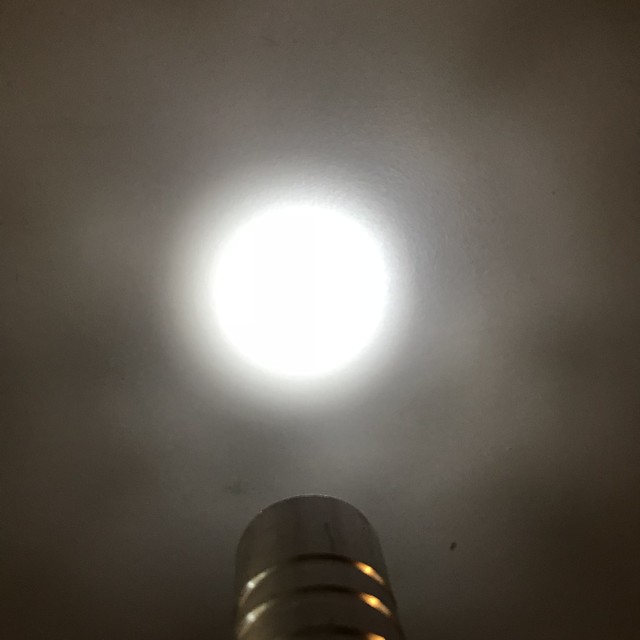 It’s not great, but it is still tons better than the horrid Incan above. Still, I’d like to see a bit more spill with much less artifacting. Spinning this thing around or moving it makes you feel like someone’s shining a light at you through shutters. It’s hard to see this when the image isn’t moving, but this thing is just too artifact-heavy.

Here is the “reflector”: 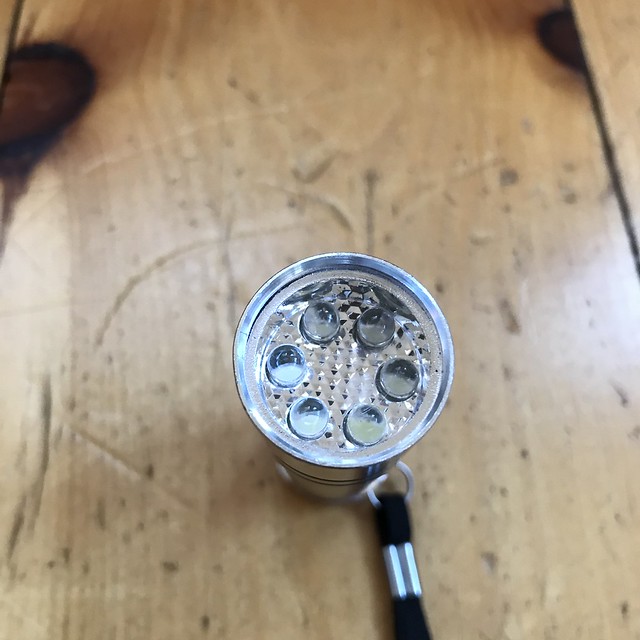 It’s literally a sticker. The lens is just a thin piece of semi-rigid plastic. Durability is not this thing’s strong suit, but it was 99 cents. And I have a flashlight problem, so yes, it followed me home one day after Thanksgiving. It now lives in my sons’ toy bin for use as a “laser cannon.” Also included in the laser kit is a large marble and some tape. They love it. 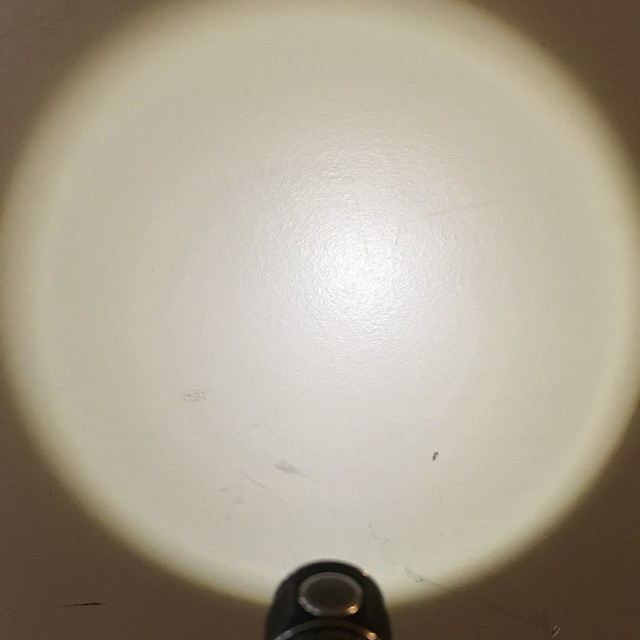 None of the marks in the lightfield are artifacts–they are dings on the wall. The beam here is distinctly different than anything else we’ve looked at. It is broad and diffuse. Although turbo on most lights is basically just for fun, because of the lack of hotspot, turbo on the Klarus is actually useful. If you have work to do, this is the best beam pattern. It won’t kill your vision in close-up work, but it also illuminates a large enough area to make the light useful.

Here is the optic on the light: 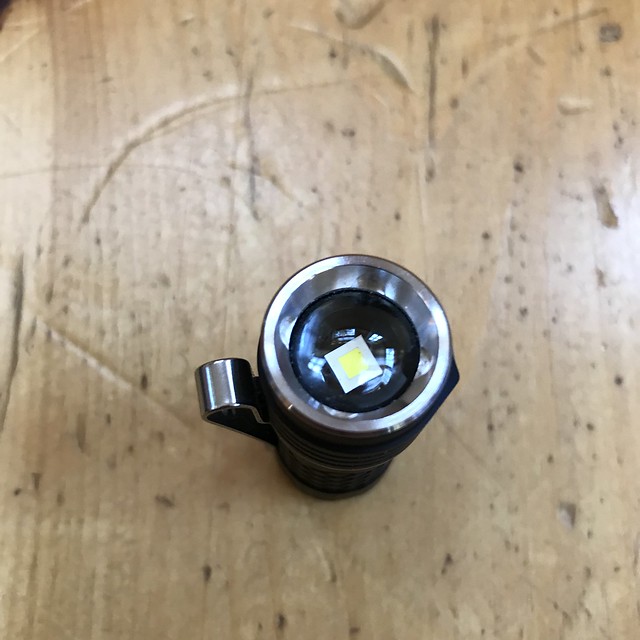 With the aspheric lens doing all of the work, there is no reflector of any kind. Quite interesting and a good way to round out your stash of illumination tools.

This takes the aspheric pattern to the next level–pure light haze. Not only is there no hotspot, but even the edges of the spill are gone. 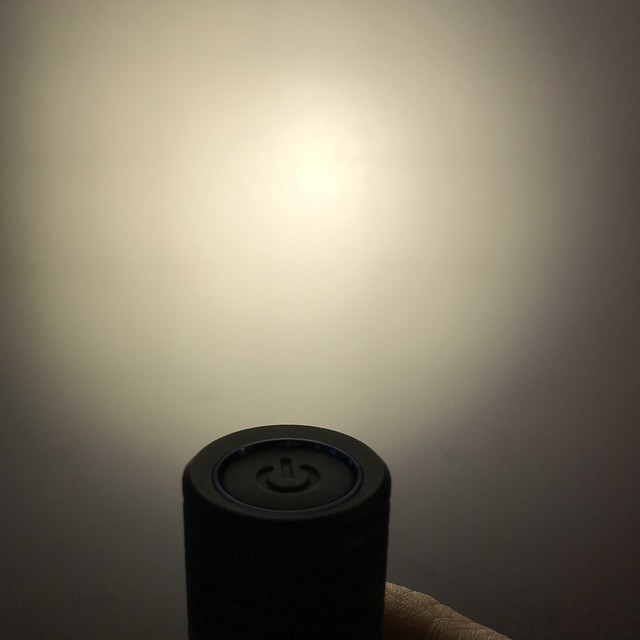 The huge light field makes normal use difficult, but in a headlamp (which the H1R is) this extra-broad field illuminates everything in front of you, just a little bit.

Here is the optic: 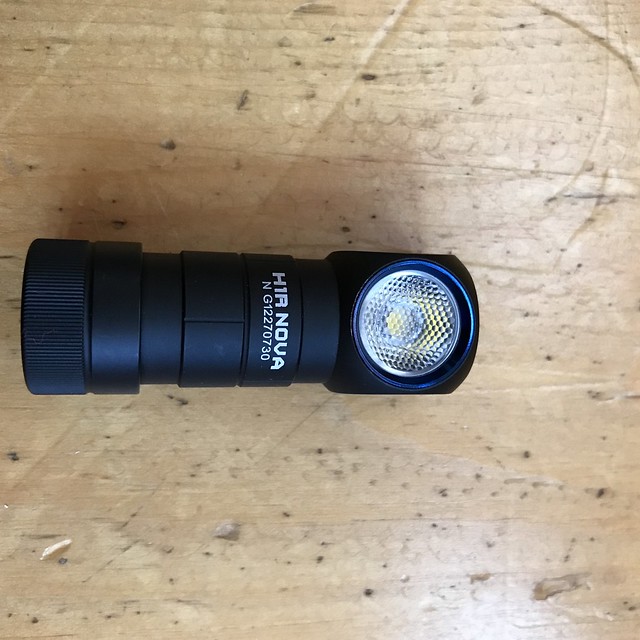 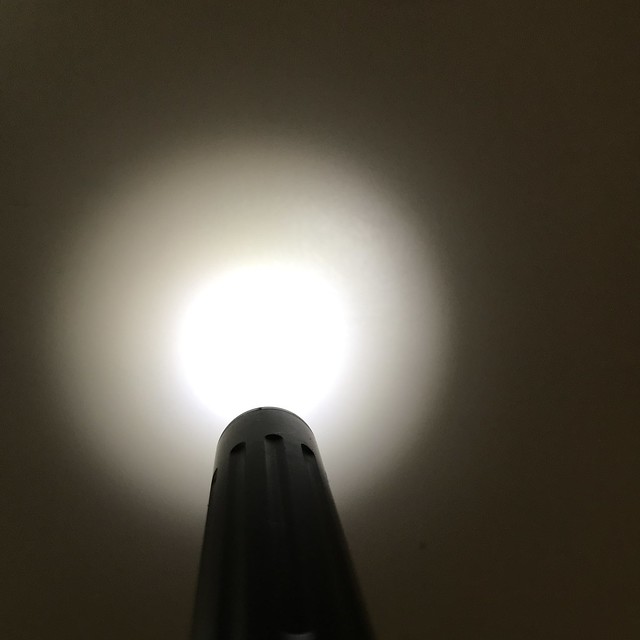 With just a naked array of weaksauce almost-20-year-old LEDs, there is not much in the way of output, but the pattern isn’t horrible up close. The problem is, when you walk about ten feet away the whole thing just disappears like a split finger drops out of the strike zone.

Here is the array: 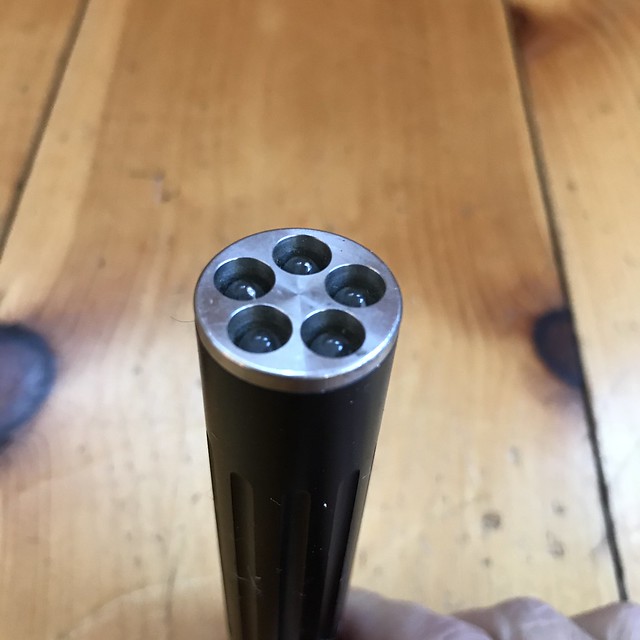 It’s so amazing that this light still works, but its lack of UI and primitive machining make me think this is like the second-grade art project from Picasso compared to what we have now. And speaking of what we have now. 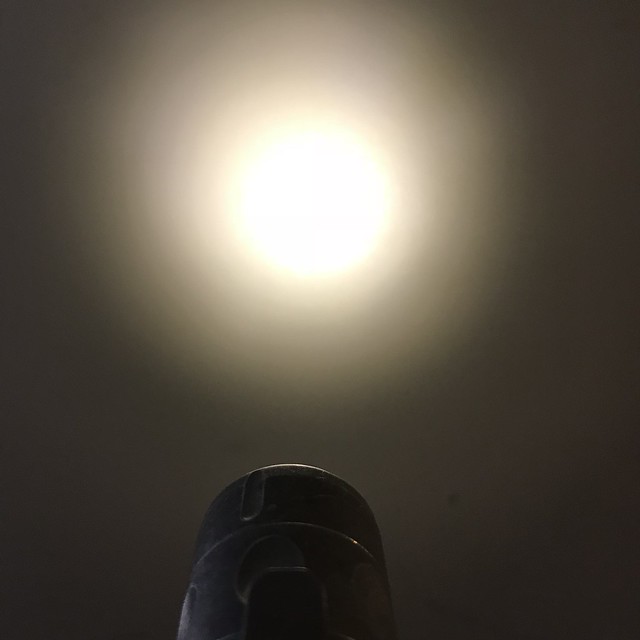 It’s Hi CRI. It outputs up to 1200 lumens. It uses a TIR with an array of emitters. The end result is a wonderfully-balanced beam pattern that rivals the Haiku’s. I can’t think of much I would do to improve the BOSS 35, and tinkering with the beam pattern is certainly not on the list (the list, in its entirety is this: improve availability). The state of the art emitter array can also have a secondary color LED added and it has the photo receptor for the light’s programming feature. This is what the bleeding edge of light tech looks like. Beautiful, right?

And here is the head: 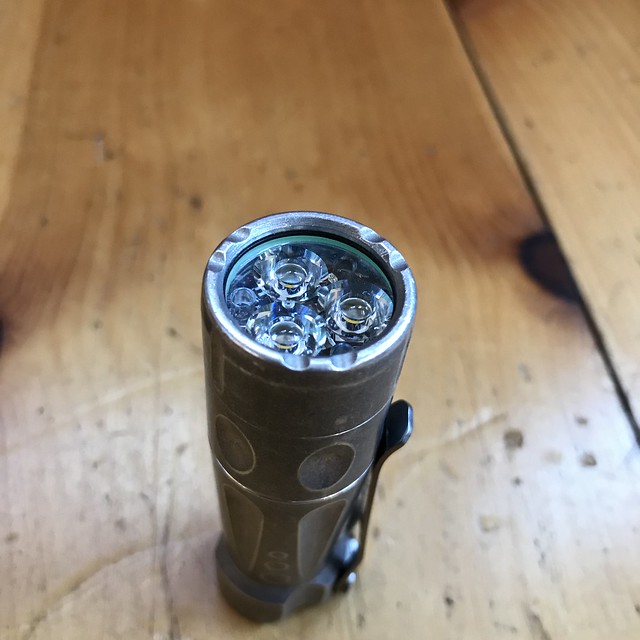 It’s so damn good.  I love this light.

So there you have it — from wretched to great, and everything in between. This is a good reference for beam patterns. Hopefully we will be getting more BOSS 35 level wonders. Maybe then someone will knock the Haiku off its perch.